Adam Crowl has been following Friedwardt Winterberg’s fusion concepts for some time, and now weighs in with a look at Winterberg’s latest thinking on the use of deuterium reactions in advanced propulsion designs. If fusion is our best bet for interstellar missions, we need to get past the limitations of deuterium/tritium, which produces a neutron flux of such proportion that a manned mission would pay a huge penalty in shielding. Winterberg’s ideas on thermonuclear deuterium reactions offer a technique with high exhaust velocities, one with interesting echoes of Project Orion.

Back in the 1960s Robert Enzmann imagined immense fusion-propelled starships which saved tankage mass by storing frozen fusion fuel – chiefly deuterium – as a huge frozen ball. Enzmann and his co-workers eventually found that deuterium isn’t a very strong solid and a tank of some sort would be needed for mechanical support under acceleration. Even so attaching a starship to a great big mass of frozen deuterium seems a good idea, in light of Dr. Friedwardt Winterberg’s updated e-print from June, entitled “Advanced Deuterium Fusion Rocket Propulsion for Manned Deep Space Missions.” 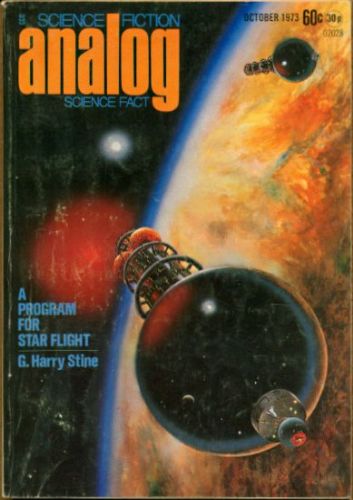 Of course the trick is igniting the deuterium-deuterium reaction and getting a high fusion-burnup fraction out of the fuel-target. Winterberg is an unapologetic skeptic of SF style interstellar ‘short-cuts’, rightly pointing out the non-evidence for anything like wormholes or warp-drives. Interstellar travel can only be seriously contemplated on the grand scale via fusion rockets.

Image: The Enzmann starship, as envisioned by artist Rick Sternbach in a 1973 issue of Analog.

Igniting Deuterium (and the Benefits)

The two fusion reactions presently within our technological reach require relatively abundant deuterium, namely deuterium-tritium and deuterium-deuterium reactions. The D-T reaction has two liabilities – most of its energy goes into uncharged neutrons and the tritium has to be continually made via breeding it in a lithium jacket subjected to that same neutron bombardment.

The D-D reaction is not so easily done as the D-T, but Winterberg’s work makes the prospects look good with sufficient effort. In this most recent paper he suggests a way of reducing the wasteful loss of kinetic energy to electrons and neutrons. Firstly the electrons are allowed to escape the fusion target after the initiation of the fusion compression process – this merely requires the target to have a sufficiently small width. Secondly the neutron/ion kinetic energy fraction can be altered by causing an auto-catalytic fusion detonation wave to form in the burning front of the fusion reaction. This causes x-rays produced by the reaction to focus on the unburnt fuel, preparing it for the fusion reaction itself.

The Shadow of Orion

Winterberg’s discussion gives some interesting insights into the “Orion” atomic rocket effort. Freeman Dyson wasn’t alone in being disturbed by the fallout issues with the fission pulse units and triggers and it was this concern which inspired Winterberg to develop non-fission triggers for pulsed nuclear fusion. Thus all the fusion starships inspired by Winterberg’s early work on electron beam ignition, like “Daedalus”, were in turn inspired by “Orion” and the fallout fears of its developers.

Non-fission triggers are a laudable goal of fusion propulsion research, but they pose a conundrum for slowing proliferation of thermonuclear weapons. Winterberg prefers a very high-powered proton beam ignition system for in-space flight, which would require a mile-long Super-Marx Generator to store up enough power for the beam here on Earth. Not a proliferation risk in either manifestation. However his preferred fusion launcher system does have military implications, using high-explosive driven argon UV lasers to trigger a two-stage DT/DD fusion pulse. Such a device could be used as a low radioactivity nuclear weapon – tritium dispersal poses its chief radiological hazard.

Fission and the Space Imperative

In all likelihood such super-explosives will require dynamic compression to create, probably requiring the apparatus to be too heavy for bombs – but what if such materials could be ‘quenched’ to STP conditions? Then we’d have a real proliferation risk. Ted Taylor, the late co-worker of Dyson on “Orion”, once dreamt a solution to non-fission triggering of fusion reactions, but never told anyone for fear of the implications.

As Arthur C. Clarke once said nuclear power not only makes spaceflight possible, but imperative…