Gamma ray bursts (GRBs) are much in the news. GRB 090423 turns out to be the most distant explosion ever observed, an event that occurred a scant 630 million years after the Big Bang. We’re detecting the explosion of a star that occurred when the first galaxies were beginning to form. Current thinking is that the earliest stars in the universe were more massive than those that formed later, and astronomers hope to use GRB events to piece together information about them. GRB 090423 was evidently not the death of such a star, but more sensitive equipment like the Atacama Large Millimeter/submillimeter Array (ALMA) will soon be online (ALMA within three years) to study more distant GRBs and open up more from this early epoch. 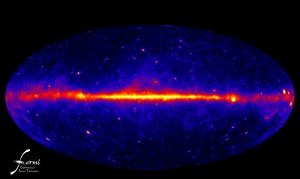 And then there’s all the fuss about Einstein. The Fermi Gamma Ray Space Telescope, which has already captured more than a thousand discrete sources of gamma rays in its first year of observations, captured a burst in May that is tagged GRB 090510. Evidently the result of a collision between two neutron stars, the burst took place in a galaxy 7.3 billion light years away, but a pair of photons from the event detected by Fermi’s Large Area Telescope arrived at the detector just nine-tenths of a second apart.

Image: This view of the gamma-ray sky constructed from one year of Fermi LAT observations is the best view of the extreme universe to date. The map shows the rate at which the LAT detects gamma rays with energies above 300 million electron volts — about 120 million times the energy of visible light — from different sky directions. Brighter colors equal higher rates. Credit: NASA/DOE/Fermi LAT Collaboration.

These are interesting photons because they possessed energies differing by a million times, yet their arrival times were so close that the difference is probably due solely to the processes involved in the GRB event. Einstein’s special theory of relativity rests on the notion that all forms of electromagnetic radiation travel through space at the same speed, no matter what their energy level. The results seem to confirm this, leading to newspaper headlines heralding ‘Einstein Wins This Round,’ and so on.

And at this point, Peter Michelson (Stanford University, and principal investigator for Fermi’s Large Area Telescope) echoes the headlines:

“This measurement eliminates any approach to a new theory of gravity that predicts a strong energy dependent change in the speed of light. To one part in 100 million billion, these two photons traveled at the same speed. Einstein still rules.”

All of this matters because we’re trying to work out a theory of quantum gravity, one that helps us understand the structure of spacetime itself. The special theory of relativity holds that the energy or wavelength of light has no effect on its speed through a vacuum. But quantum theory implies that, at scales trillions of times smaller than an electron, spacetime should be discontinuous. Think of it as frothy or foamy. 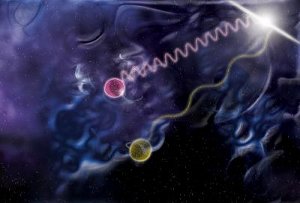 In that case, we would expect that shorter wavelength light (at higher energies) would be slowed compared to light at longer wavelengths [but see Erik Anderson’s comment below, which argues that this should be reversed, greater delays for lower-energy photons]. So the theories imply, and they’ve been untestable because we don’t have the tools to tease out information at the Planck length and beyond.

Image: In this illustration, one photon (purple) carries a million times the energy of another (yellow). Some theorists predict travel delays for higher-energy photons, which interact more strongly with the proposed frothy nature of space-time. Yet Fermi data on two photons from a gamma-ray burst fail to show this effect, eliminating some approaches to a new theory of gravity. Credit: NASA/Sonoma State University/Aurore Simonnet.

So does special relativity fail at the quantum level? The Fermi instrument has given us the chance to use astronomical data to test these ideas. The 0.9 second difference between the arrival times of the higher and lower-energy gamma rays tells us that quantum effects that involve light slowing proportional to its energy do not show up at least until we get down to about eight-tenths of the Planck length (10-33 centimeters).

That’s useful information indeed, but we still need a way to place Einsteinian gravity into a theory that handles all four fundamental forces, unlike the Standard Model, which unifies three. So what GRB 090510 gives us is early evidence about the structure of spacetime of the sort that future Fermi data can help to refine. Einstein confirmed? At this level, yes, but pushing deeper into the quantum depths via GRB study may help us see, in ways that laboratory experiments cannot show, how gravity at the quantum level fits into the fabric of the universe.

The paper is Abdo et al., “A limit on the variation of the speed of light arising from quantum gravity effects,” Nature advance online publication 28 October 2009 (abstract). The paper on GRB 090423 is Chandra et al., “Discovery of Radio Afterglow from the Most Distant Cosmic Explosion,” submitted to Astrophysical Journal Letters and available online.