The Earth receives thousands of tons of interplanetary dust every year as it makes its way around the Sun. Can we trace any of this material to a particular source? Scientists from the Carnegie Institution think the answer is yes, at least in the case of comet Grigg-Skjellerup. The Carnegie team worked with interplanetary dust particles (IDPs) collected by a NASA aircraft in 2003, just after the Earth had passed through the comet’s tail, focusing on the chemical, isotopic and micro-structural composition of the grains.

A bit of background: NASA’s Scott Messenger (JSC-Houston) predicted that Grigg-Skjellerup dust grains could be captured in the stratosphere at a specific time of the year (the comet reappears every five years). The dust collection flights that followed his prediction involved an ER-2 high-altitude aircraft flown out of Dryden Flight Research Center in 2003. Out of this work came the new mineral now called Brownleeite, a manganese silicide found in one of the particles. NASA routinely collects IDPs in such flights. 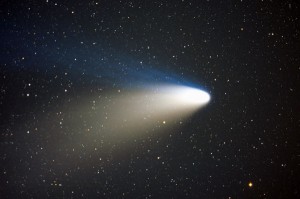 In the Carnegie IDP study, a particular signature seems to stand out. “What we found is that they are very different from typical IDPs,” says Carnegie’s Larry Nittler. “They are more primitive, with higher abundances of material whose origin predates the formation of the solar system.” That again points the finger at comet Grigg-Skjellerup, and it also offers the opportunity to study comet particles in the lab from more than a single comet. Recall that the Stardust mission brought back particles from comet 81P/Wild 2 in 2006.

This is helpful stuff because comets are believed to incorporate matter from the Solar System’s formative era. We would expect such material to have escaped the heating and chemical processing that would have affected the planets, but interestingly enough, the Wild 2 dust included a great deal of altered material, as this news release points out. Grigg-Skjellerup’s dust tells us that all comets are not the same in terms of composition, giving us the chance, as Nittler says, to “…use them as tracers for different processes that occurred in the solar system four-and-a-half billion years ago.”

We can also weigh the Grigg-Skjellerup material against the findings of the Deep Impact experiment on comet 9P/Tempel 1. From the abstract of the paper on this work:

Our study together with observations of comet 9P/Tempel 1 during the Deep Impact experiment and 81P/Wild 2 dust analyses reveal some compositional variations and many similarities among three Jupiter-family comets. Specifically carbonates and primitive organic matter or amorphous carbon were widespread in the comet-forming regions of the outer protoplanetary disk and not all comets contain as much inner solar system material as has been inferred for comet 81P/Wild 2.

Presolar grains — dust particles formed in previous star generations and in supernovae before the birth of the Solar System — provided the biggest surprise. They can be identified by their unusual isotopic compositions, but they’re normally quite rare. Yet in the dust particles associated with Grigg-Skjellerup they are tens of times more plentiful than in other primitive materials.