One problem with journeys that are beyond today’s technologies is that we forget, in our zeal to get a payload to the target, how little we know about the regions we’ll pass through along the way. It’s amazing how little we know, for example, about the heliosphere around the Solar System, yet any probe pushing into interstellar space will have to cross from the region of space under the Sun’s influence into a zone where the interstellar medium flows around this ‘bubble,’ disturbing the solar wind and creating a secondary bubble, the heliosheath.

We don’t yet have a global view of what spacecraft will encounter in the heliosheath as the solar wind is heated and slowed by these interactions. Only recently have we gotten the Voyagers into these regions, and in any case these doughty vehicles can only produce single-point measurements. But we’ve got the IBEX (Interstellar Boundary Explorer) spacecraft making observations from near Earth, and now we learn that Cassini, our intrepid Saturn orbiter, has also produced excellent data on what happens at system’s edge.

This JPL news release uses a more vivid turn of phrase: “…the new results suggest our heliosphere more closely resembles a bubble – or a rat – being eaten by a boa constrictor: as the solar system passes through the “belly” of the snake, the ribs, which mimic the local interstellar magnetic field, expand and contract as the rat passes.” 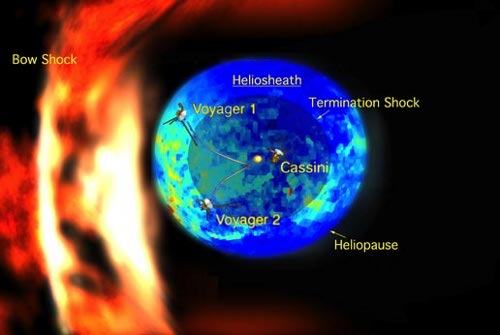 Image: In this illustration, the multicolored (blue and green) bubble represents the new measurements of the emission of particles known as energetic neutral atoms. The energetic neutral atoms were streaming in from the thick boundary known as the heliosheath. The heliosheath is the region between the heliosphere, the region of our sun’s influence, and the interstellar medium, the matter between stars in our galaxy. Areas in red indicate the hottest, most high-pressure regions and purple the coolest, lowest-pressure regions. Credit: NASA/JPL/JHUAPL.

As to the heliosheath itself, the Cassini data indicate it’s somewhere between 40 and 50 AU thick. That’s a remarkable result from a spacecraft that has as its primary mission the investigation of Saturn and its moons. But Cassini’s studies of the energetic electrons and ions trapped in Saturn’s magnetic field, and of the energetic neutral atoms also produced in this environment, have produced a treasure trove of data that includes particles arriving from the outer Solar System.

Usefully, the picture that began to emerge from Cassini squared with what IBEX had already produced, thus deepening our understanding of this outer region. Says MIMI scientist Don Mitchell (JHUAPL):

“I was initially skeptical because the instrument was designed for Saturn’s magnetosphere. But our camera had long exposures of months to years, so we could accumulate and map each particle that streamed through the tiny aperture from the far reaches of the heliosphere. It was luck, but also a lot of hard work.”