How Do Brown Dwarfs Form?

Now that we are looking forward to the WISE mission (Wide-Field Infrared Survey Explorer) and its investigations into nearby brown dwarfs, it’s startling to realize that we detected the first of these objects as recently as 1995. Today they’re all the rage, particularly among that small band of us obsessed with missions to nearby interstellar space. A cool, dim brown dwarf could be the closest star to our Sun, an obvious target for a future probe once long-haul propulsion options begin to mature.

Brown dwarfs are too cool to trigger hydrogen fusion, so it takes infrared capabilities like those of WISE or the Spitzer Space Telescope to tell us much about these dim objects. A key question has been whether they form like planets or stars. Spitzer may have found the answer in the form of two ‘proto brown dwarfs’ that have been located in a cloud called Barnard 213, a region of the Taurus-Auriga complex where young objects abound. The finding is significant because we’ve never before found a clear case of a brown dwarf in its earliest formative period.

“We decided to go several steps back in the process when (brown dwarfs) are really hidden. During this step they would have an (opaque) envelope, a cocoon, and they would be easier to identify due to their strong infrared excesses. We have used this property to identify them. This is where Spitzer plays an important role because Spitzer can have a look inside these clouds. Without it this wouldn’t have been possible.”

The result is an infant brown dwarf called SSTB213 J041757, a find that turns out to include not one but two brown dwarfs that are among the faintest and coolest ever observed. Numerous other sites, from the Caltech Submillimeter Observatory in Hawaii to the Calar Alto Observatory in Spain and the Very Large Array in New Mexico took part in the study, which analyzed the dusty envelope around the objects, allowing astronomers to create a spectral density distribution that shows the amount of energy emitted by the objects in each wavelength. 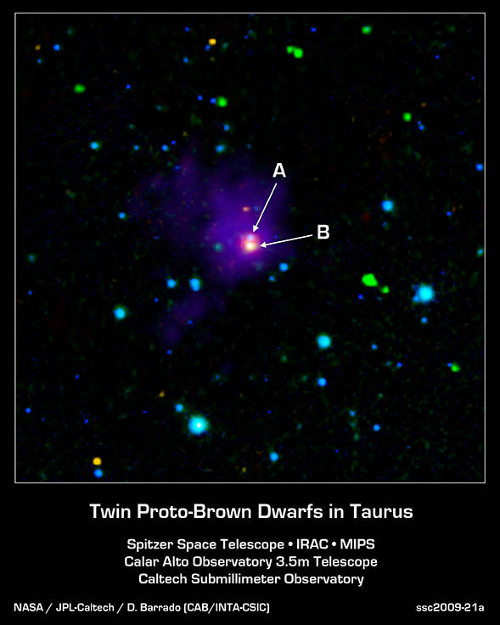 Image: Here we see a long sought-after view of these very young objects, labeled as A and B, which appear as closely-spaced purple-blue and orange-white dots at the very center of this image. The surrounding envelope of cool dust surrounding this nursery can be seen in purple. These twins, which were found in the region of the Taurus-Auriga star-formation complex, are the youngest of their kind ever detected. They are also helping astronomers solve a long-standing riddle: Do brown dwarfs form more like stars or planets? Credit: NASA/JPL-Caltech/D. Barrado (CAB/INTA-CSIC).

Assuming the work stands up to scrutiny, the implication is that brown dwarfs form more like stars than planets — the spectral density distribution matches other young, low-mass stars. The paper, not yet available, is Barrado et al., “A proto brown dwarf candidate in Taurus,” in press at Astronomy & Astrophysics.