Circumstellar Disk Around a Massive Star 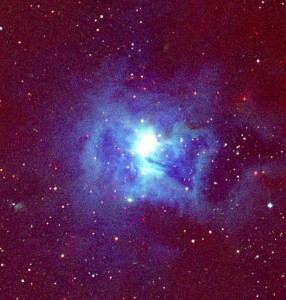 The image at the right shows HD200775, a close binary that contains one star ten times the mass of the Sun. The two stars illuminate the surrounding cavity of molecular gas, the closest of which forms the reflection nebula known as NGC7023. The binary is located some 1400 light years from Earth and is the subject of recent work by an international team that has produced the first well-resolved images of a circumstellar disk around a young, massive star. You can see the disk they found in the mid-infrared in the second image below.

Image: HD200775 and its nebula. The bright star at the center is HD200775, which illuminates the surrounding nebula. The upper and lower part of HD200775 is the reflection nebula NGC7023. The hourglass-shaped nebula extending in the east-west direction (east is left) encircles a cavity formed by past outflow activity. Okamoto et al. zoomed in and imaged an area around HD200775. Credit: DSS/2MASS/Subaru Telescope.

What we’re after is a better understanding of how massive stars — those with masses eight times or more greater than the Sun — originally form. One model is disk accretion, which is the same model we use for low-mass stars like the Sun. Here a cocoon of gas contracts and forms a circumstellar disk, one that may eventually spawn a planetary system. The second model is the merger of less massive stars, but work in the early 2000s has thus far pointed to accretion, and the recent work on HD200775 is telling us much the same story. 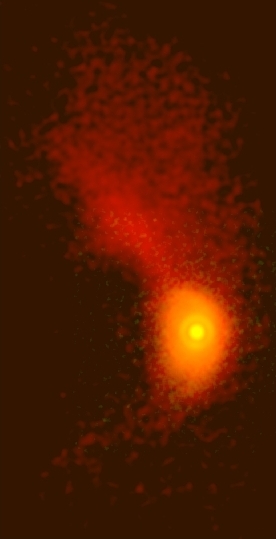 Many images of disks around low mass stars exist that help us understand the process, but no clear images of a disk around a massive star has been available until now. The new work relies on data from the Subaru Telescope fitted with the Cooled Mid-Infrared Camera and Spectrometer (COMICS). What emerges is a circumbinary disk, one that surrounds both stars of the binary system. The disk appears to be flared rather than flat, and it appears that strong ultraviolet radiation from the massive star evaporates the gas of the disk, quickly dissipating it. The conclusion: Accretion is still at work here, but the disk around such a star is likely to be short-lived, which accounts for our difficulty in finding previous examples.

Image: Mid-infrared image of HD200775 taken with COMICS (Cooled Mid Infrared Camera and Spectrometer) mounted on the Subaru Telescope. The detected disk is the yellow portion in the lower right. HD200775 is in the central position, although the infrared emission mostly arises from dust grains in the vicinity of the star, not from the star itself. (Note that the circular ring immediately surrounding the central star is a diffracted light pattern created by the telescope aperture; it is not a real structure.) The elliptical shape stretching in the north-south direction (top to bottom) is a configuration that indicates we are seeing the stars’ system from an angle inclined from a disk pole (perpendicular to the disk). The structure imaged in red and extending toward the northeast reaches out toward the reflection nebula NGC7023. It probably bridges the disk and an envelope (cloud of dust and gas) that has a structure 30 times larger in scale. Credit: Subaru Telescope.

Exactly how short-lived such disks are is an interesting question, for we’d also like to know whether we can expect planet formation around stars of this size. The paper is Okamoto et al., “Direct Detection of a Flared Disk Around a Young Massive Star HD200775 and its 10 to 1000 AU Scale Properties,” Astrophysical Journal 706 (20 November 2009), pp. 665-675 (abstract, preprint available).