A Universe Optimized for Starships?

When you consider that conventional chemical rockets extract a mere 10-8 of the energy locked up in their fuel, the attraction of antimatter becomes undeniable. Could we build an engine that extracts 100 percent of the energy created by matter-antimatter annihilation? Louis Crane (Kansas State University) is dubious, pointing to problems of storage and the difficulty of making enough antimatter to get the job done.

Black Holes as a Propulsion Option

Working with colleague Shawn Westmoreland, Crane has been exploring a different and far more speculative option for upping the energy extraction levels. What about using black holes for propulsion? Specifically, Crane and Westmoreland ask whether Hawking radiation from black holes can power a starship, calculating that a black hole of about a million tons would be just the right size, small enough to generate the needed Hawking radiation, while large enough to survive for the duration of a century-long star crossing. Adam Crowl has written fascinatingly about this in Crowlspace. 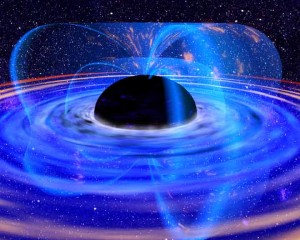 Crane and Westmoreland’s paper on using Hawking radiation for this purpose has been kicking around on the Net for a bit, never quite making it to the top of the queue here, but Marcus Chown gives it a good look in the latest New Scientist, so let’s pause to examine it now. Rather than finding a nearby black hole, the two suggest using a gamma ray laser powered by solar energy to create one. The energy needed would be enormous, calling for solar panels 250 kilometers across in close solar orbit, a Robert Forward-esque engineering challenge.

But if you could create such solar panels and let them soak up the needed sunlight to power up your black hole production facility, you’d wind up with something tiny that offered tremendous power. Says Chown:

The resulting million-tonne black hole would be about the size of an atomic nucleus. The next step would be to manoeuvre it into the focal range of a parabolic mirror attached to the back of the crew quarters of a starship. Hawking radiation consists of all sorts of species of subatomic particles, but the most common will be gamma ray photons. Collimated into a parallel beam by the parabolic mirror, these would be the starship’s exhaust and would push it forward.

Crane and Westmoreland think a starship powered this way could accelerate to close to the speed of light in a few decades, fast enough that relativistic time dilation would occur and vast distances could be crossed by human crews. Interestingly, a black hole starship like this should create gravitational waves that might be detectable here on Earth, assuming some nearby extraterrestrial civilization were using the technology. If coalescing black holes and neutron stars ought to be producing low-frequency gravitational waves, a black hole starship should leave a gravitational signature at ultra-high frequencies.

Chown does a good job with this material, and I recommend you check out his New Scientist article. He points to Lee Smolin’s idea that at the singularity of a black hole, new universes could be created and bud off from their parent. It stands to reason, then, that universes that are optimized for black holes are those likely to give rise to more and more such universes. And if we could make our own black holes, then life would play a role in making infant universes proliferate.

[Crane] believes we are seeing Darwinian selection operating on the largest possible scale: only universes that contain life can make black holes and then go on to give birth to other universes, while the lifeless universes are an evolutionary dead end.

His latest calculations made him realise how uncanny it was that there could be a black hole at just the right size for powering a starship. “Why is there such a sweet spot?” he asks. The only reason for an intelligent civilisation to make a black hole, he sees, is so it can travel the universe.

“If this hypothesis is right,” he says, “we live in a universe that is optimised for building starships!”

I don’t have time this morning to get into Chown’s discussion of Jia Liu (New York University), who has concocted a spacecraft powered by dark matter, but in any case the Jia Liu paper was in queue for next week, so we’ll talk about it then. Talk about living on the speculative edge — we don’t even know what dark matter is at this point! But as fun as these ideas are to kick around, they also let us roam through broad questions of cosmology and physics in ways that can provoke discussion and help us illuminate our current propulsion constraints.

Marcus Chown’s article is “Dark Power: Grand Designs for Interstellar Power,” New Scientist 25 November, 2009 (available online, but get it fast before it disappears behind the magazine’s firewall). The black hole propulsion paper is Crane and Westmoreland, “Are Black Hole Starships Possible,” available online.