That ignorance can cause cascading errors is a lesson never better taught than through the experience of George Brown, British foreign secretary in Harold Wilson’s government (this was about forty years ago). One day Brown was in Peru for a reception and, indulging in the local spirits, became thoroughly ripped. Enjoying the music, he was quick to act when a guest in flowing purple robes went by. An entranced Brown followed and asked the mysterious person to dance.

The New York Times recalls the result: The purple-robed figure refused the overture. “First, you are drunk,” the guest is said to have replied. “Second, this is not a waltz; it is the Peruvian national anthem. And third, I am not a woman; I am the Cardinal Archbishop of Lima.”

Cascading errors are always fun except when they happen to you. This morning I’ve had several computer glitches of increasing intensity. Finally, when I thought I had them all worked out, a window popped up advising me that my C: drive was about to fail. Hmmm… I use multiple drives, but I boot Linux off C:, so I’m hoping I can get today’s entry finished before anything further happens. One more problem and Centauri Dreams is through for the day. 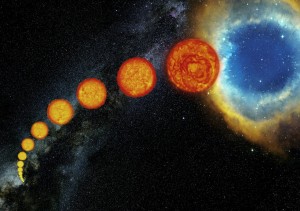 But before that happens, let’s see if I can squeeze in a new study of Sun-like stars made with ESO’s Very Large Telescope, work which has pointed to our own ignorance of a continuing mystery. Here’s the problem: Stars with the mass of the Sun normally swell into cool red giant stars that show regular variations in luminosity at timescales of several years. The process is thought to be well understood: The star is swelling and shrinking, becoming brighter and dimmer on a regular basis. But about a third of Sun-like stars at this point in their lives demonstrate an additional variation, one astronomers are calling a Long Secondary Period (LSP). The problem is to figure out what causes the LSP.

Image: Born from clouds of gas and dust, stars like our Sun spend most of their lifetime slowly burning their primary nuclear fuel, hydrogen, into the heavier element helium. After leading this bright and shiny life for several billion years, their fuel is almost exhausted and they start swelling, pushing the outer layers away from what has turned into a small and very hot core. These “middle-aged” stars become enormous, hence cool and red — red giants. All red giants exhibit a slow oscillation in brightness due their rhythmic “breathing” in and out, and one third of them are also affected by additional, slower and mysterious changes in their luminosity. After this rapid and tumultuous phase of their later life, these stars do not end in dramatic explosions, but die peacefully as planetary nebulae, blowing out everything but a tiny remnant, known as white dwarf. Credit: ESO.

Peter Wood, the team leader of a recent program monitoring 58 Sun-like stars in the Large Magellanic Cloud, used the FLAMES/GIRAFFE spectrograph on the Very Large Telescope combined with images from other telescopes to study the properties of these stars over two and a half years. One explanation for LSPs had been pulsations, but that theory seems to have been disproven. Says Wood:

“The newly gathered data show that pulsations are an extremely unlikely explanation for the additional variation. Another possible mechanism for producing luminosity variations in a star is to have the star itself move in a binary system. However, our observations are strongly incompatible with this hypothesis too.”

In a paper on this work, Wood (Australian National University) and colleague Christine Nicholls explain their interest in studying these stars to see whether unusual amounts of circumstellar dust are involved. A snippet from the paper (internal references omitted for brevity):

The change in visible light associated with the LSP is typically of a rather irregular nature, and the light variation can be large up to a factor of two. In the binary model, it has been suggested that the light change could be due to a large dust cloud orbiting with the companion and obscuring the red giant once per orbit… Another possible explanation for the LSPs… involves semi-periodic dust ejection events such as those predicted by theoretical models of AGB stars.

And indeed, the stars under investigation show a mid-infrared flux excess, which would be the result of stellar light being absorbed by circumstellar dust and re-radiated at these wavelengths. That indicates that the LSP fluctuations cause the red giant to lose mass, leading to increased dust formation, but the paper points out that we still don’t know what causes the LSP phenomenon in the first place. Frustrating? You bet. But the recent search does offer up a lengthy set of properties for stars with LSPs, and more or less throws down the gauntlet to researchers to solve the mystery. Sometimes knowing what we don’t know is the only way to revitalize the search for genuine knowledge.

Another error message. I’ve got to get this posted fast.