Launch of the WISE mission has again been delayed, now scheduled for December 14 with a launch window of 1409 to 1423 UTC (0909-0923 EST). Launch will take place at Vandenberg Air Force Base in California, with coverage offered on NASA TV. A live feed from the on-board camera will be active here.

The Wide-field Infrared Explorer will spend nine months covering the entire sky at mid-infrared wavelengths, studying targets ranging from the remotest galaxies to near-Earth objects, and building our catalog of brown dwarfs near the Sun. Most infrared wavelengths can’t penetrate Earth’s atmosphere, so a space-based perch — WISE will take up a circular polar orbit some 525 kilometers up — is essential for good viewing. The complete WISE survey will involve over a million images, forming a source catalog for the James Webb Space Telescope, which is scheduled for a 2014 launch. 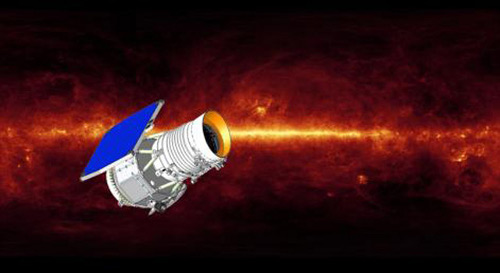 Image: The Wide-field Infrared Survey Explorer mission will survey the entire sky in a portion of the electromagnetic spectrum called the mid-infrared with far greater sensitivity than any previous mission or program ever has. The survey will consist of over a million images, from which hundreds of millions of astronomical objects will be catalogued, providing a vast storehouse of knowledge about the solar system, the Milky Way, and the universe. Credit: NASA/JPL.

The catalog idea is an important one. All-sky surveys, in this case at wavelengths from 3.5 to 23 microns, make for the most efficient use of large telescopes by building the target list for detailed investigation. The brown dwarf issue is especially intriguing because WISE should be able to tell us much about their distribution in nearby space, including the ever interesting question of whether any brown dwarfs exist closer to us than the Centauri stars. Because brown dwarfs can have planetary systems of their own, a dwarf like this would be an obvious candidate for future deep-space probes.

We’ve had surveys working in the infrared before, including the Two Micron All-Sky Survey (2MASS), a ground-based study that covered the sky in the near-infrared (between 1.25 and 2.17 microns) and the Cosmic Background Explorer (COBE), a space-based mission that worked at infrared and microwave wavelengths (its infrared range was 1.25 to 3.5 microns). And then there was IRAS, the Infrared Astronomical Satellite of the 1980’s, working between 12 and 100 microns. The mid-infrared, in other words, represents a gap in current data that WISE will fill.

Moreover, says principal investigator Ned Wright (UCLA), WISE should seriously ramp up the quality of our data, because previous surveys worked with less sensitive detectors — IRAS, for example, used just 62 pixels to cover four infrared bands, while WISE can work with four million pixels. In the wavelength range where the surveys overlap, WISE will offer hundreds of times the sensitivity of IRAS and hundreds of thousands of times that of COBE. “The old all-sky infrared pictures were like impressionist paintings,” says Wright. “Now, we’ll have images that look like actual photographs.”

Current thinking is that there may be as many brown dwarfs as normal stars in the galaxy. But WISE will also be useful at pinpointing near-Earth objects such as asteroids and comets, and if we really get lucky, we may find something intriguing in the Oort Cloud. This Space.com article, for example, speculates that a gas giant the size of Neptune or even Jupiter could lurk among the comets there, throwing yet another monkey wrench into our definition of a planet. At the other end of the distance scale, WISE will look at the earliest galaxies in formation, dust-shrouded objects laden with new stars that are all but impossible to study in visible light.