Voyagers Look at the Edge of the Solar System

We always cite the Mars rovers as examples of missions that perform far beyond their expected lifetimes, but the two Voyager spacecraft are reminding us once again that we have instrumentation at the edge of the Solar System that is still functioning after all these years. Both Voyagers are now in the heliosheath, the outermost layer of the magnetic bubble we call the heliosphere. With Voyager 1 crossing into the heliosheath in late 2004 and Voyager 2 in the summer of 2007, we get an estimate of the size of the heliosphere, a useful finding because it tells us something about what lies beyond.

What’s out there has been known for some time. Indeed, the interstellar medium (ISM) houses some ten percent of the visible matter in the Milky Way, mostly in the form of hydrogen gas. The ISM is patchy, enough so that astronomers have been able to isolate a Local Interstellar Cloud through which our Solar System is moving, a cloud flowing outward from the Scorpius-Centaurus Association, a region of star formation. About thirty light years wide, this cloud is colloquially called the ‘Local Fluff.’

The Voyagers have yet to reach the cloud, but they’re closing in on it, and therein hangs a tale. For what determines the size of the heliosphere appears to be the balance between the inflation of the ‘bubble’ by the solar wind and the compressive forces of the Local Interstellar Cloud. In a new paper in Nature, Merav Opher (George Mason University) uses Voyager data to study this balance. Some of the pressure exerted by the cloud is magnetic, and Opher’s measurements of the magnetic field help us to understand how the cloud continues to exist despite forces that should tear it apart.

The problem is that the ‘Local Fluff’ should have been dissipated by the effects of nearby supernovae that exploded some ten million years ago. These hot gases would break up the cloud were it not for its strong magnetic field, argues Opher, who goes on to phrase the issue starkly:

“Using data from Voyager, we have discovered a strong magnetic field just outside the solar system. This magnetic field holds the interstellar cloud together and solves the long-standing puzzle of how it can exist at all.”

The Local Interstellar Cloud is thirty light years across and, given its temperature and density, should not be able to resist the effects of the supernova gases around it. Opher’s finding is that the cloud is much more strongly magnetized than had been previously thought, between 4 and 5 microgauss. This is roughly twice previous estimates. “This magnetic field,” adds Opher, “can provide the extra pressure required to resist destruction.” 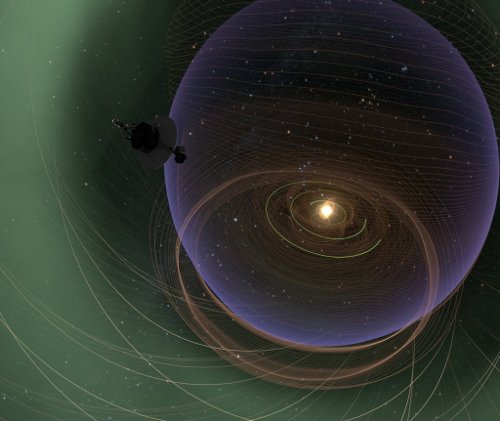 Image: Voyager flies through the outer bounds of the heliosphere en route to interstellar space. A strong magnetic field reported by Opher et al in the Dec. 24, 2009, issue of Nature is delineated in yellow. Image copyright 2009, The American Museum of Natural History.

The field is found to be tilted between 20 and 30 degrees from the interstellar medium flow direction (determined by the Sun’s motion), and is at an angle of 30 degrees from the galactic plane. The conclusion: The interstellar medium is turbulent, at least in the vicinity of our Solar System. If other nearby clouds are similarly magnetized, the heliosphere should vary in size as the Sun moves through them (on a timescale of hundreds of thousands of years), varying the protection the heliosphere offers the inner system against galactic cosmic rays.