We’ve long speculated about astrobiology on planets around stars like the Sun, and lately the thinking has moved to M-class dwarfs and whether or not they could be circled by habitable planets. But what about massive stars, classes A and B, where we’re looking at two to fifteen times the mass of the Sun? New work from the Harvard-Smithsonian Center for Astrophysics (CfA) and the National Optical Astronomy Observatory (NOAO) tells us that planets form readily around such stars, leading Xavier Koenig (CfA) to tell a press conference at the AAS meeting this week in Washington, “We see evidence of planet formation on fast forward.”

Make no mistake, massive stars present a challenging environment for planet formation. Their disks may be packed with useful material for building worlds, but the intense stellar radiation and winds from these stars work to destroy the disks in relatively short order. Koenig and colleagues looked at the star-forming region W5, some 6500 light years away in the constellation Cassiopeia, using data from the Spitzer Space Telescope and the Two Micron All-Sky Survey (2MASS). They were looking in the infrared for evidence of dusty disks in a target list of over 500 A and B stars.

The result: About one in ten of the stars examined show signs of dusty disks, and of these, fifteen showed signs of the kind of central clearing of the system that would indicate the presence of a young gas giant. Says Lori Allen (NOAO):

“The gravity of a Jupiter-sized object could easily clear the inner disk out to a radius of 10 to 20 astronomical units, which is what we see.” 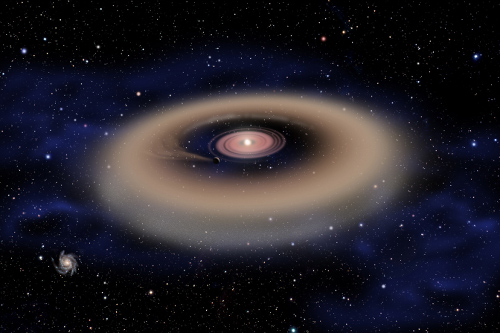 Image: This artist’s conception shows a Jupiter-sized planet forming from a disk of dust and gas surrounding a young, massive star. The planet’s gravity has cleared a gap in the disk. Of more than 500 stars examined in the W5 star-forming region, 15 show evidence of central clearing that may be due to forming planets. Credit: David A. Aguilar, CfA

These are young stars, some two to five million years old, and it’s significant that most of them have already lost the raw materials they need to form planets. A and B stars, it seems, must form their planets quickly or they won’t form them at all. And if planet formation around such stars can be seen as a balancing of forces — plentiful ingredients, devastating solar winds — the chances for astrobiology seem to enjoy no such counterbalancing effect. Stars like these live for ten to 500 million years before they run out of fuel, an all too brief window for the development of complex life forms.