The Exoplanetology site is developing a tool for those in need of quick exoplanet information. The Exoplanet Seeker is an interface that will make it easy to query various exoplanet databases, including the Extrasolar Planet Encyclopedia, NASA’s PlanetQuest New Worlds Atlas, the Exoplanet.org site and other sources like the Wikipedia and SIMBAD. Each of these sites has its own strengths, from light curves to graphical charts, so bringing them together will be helpful once early bugs in the interface (producing frequent failed queries) are resolved.

From tools on the Net to tools in space, it’s always interesting to speculate on what’s in the pipeline. Maybe ‘pipeline’ is too strong a word, though, because tools like the Transiting Exoplanet Survey Satellite (TESS) have to be approved by NASA, which is willing to consider an earlier version of the instrument it rejected but can offer no promise of success. Nonetheless, the results from CoRoT and the early detections of Kepler (not to mention the possibilities of WISE in finding nearby brown dwarfs) keep space instrumentation in sharp focus.

We’ve looked at TESS before, noting that its six wide-angle lenses would be put to use flagging stars with planets, building a list that the James Webb Space Telescope (to be launched in 2014) would then study in greater detail. What’s interesting about TESS, as this short article in Popular Science points out, is that it would scan a chunk of sky some 400 times larger than Kepler. That involves 2.5 million of the closest stars, a search that should return an abundance of interesting worlds to study. 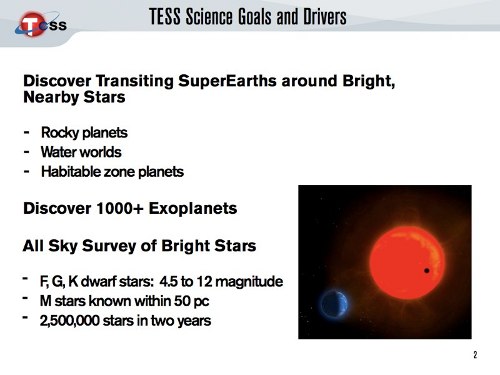 The thinking of the TESS team, according to this MIT news release, is that between 1600 and 2700 planets might be found in the first two years of observations, including between 100 and 300 small, rocky worlds. The light curves produced by the planetary transits TESS observes would then be passed along to observatories on the ground and slated for spectroscopic analysis by the Webb instrument. The latter could potentially reveal details about planetary atmospheres and their constituents. Expect a new TESS proposal to be submitted this year to follow up an earlier initial feasibility study.

Meanwhile, we continue to watch the development of the Webb telescope with great interest. Mark Clampin (NASA GSFC), discusses the possibilities for planetary spectroscopy in an instrument originally designed to search for the earliest galaxies. JWST will be able to extract a lot of information from a planetary transit:

“By comparing the two spectra for the star (in and out of transit), we can extract the planet’s spectrum and learn about the planet’s atmosphere. We have to collect a lot of infrared light — a billion or more photons — for each spectral element to isolate features. Webb is perfect for this kind of study.”

TESS could be quite useful in feeding targets to JWST, but the latter will also be doing planet-hunting of its own using coronagraphic techniques that block the light of stars so planets around them are more readily visible. Clampin continues:

“Webb will show us what the ‘exoplanet zoo’ looks like. This telescope will be very good at observing and taking spectra of gas giant planets, and we can take some spectral data on smaller planets, too, about Neptune-sized. Our telescope will also zoom in to study newly discovered super Earths — planets bigger than Earth but smaller than Neptune.”

Exciting times ahead as we contemplate our next steps in space-based observation, especially the deployment of JWST’s 25 m2 collecting area. Will JWST be able to tell us whether life exists on distant terrestrial worlds? Probably not, though Clampin isn’t above hedging his bets:

“A true Earth twin would be too small to emit enough infrared light from its atmosphere for Webb to pick up. Still, every time scientists make statements like that, someone proves them wrong. Transit science is changing so fast, it’s hard to say exactly what wonders Webb’s hunt will turn up.”

A recent NASA article on JWST is here.