I’m looking at the National Research Council’s final report on the detection of near-Earth objects, the culmination of the study that produced the NRC’s interim report last year. Let’s recall the context: It was in 2005 that Congress mandated that NASA find 90 percent of NEOs with a diameter of 140 meters or greater, such discovery to be concluded by 2020. The interim report, discussed in an earlier Centauri Dreams story, concluded that NASA couldn’t meet this goal because funds for the survey had never been appropriated.

Now we have a final report with suggestions on what NASA could do to finish the survey as soon as possible after the original 2020 deadline. Two possibilities emerge: A space-based telescope working in tandem with a ground-based telescope could finish the job the fastest. But if cost-cutting is necessary, the space option will have to be abandoned in favor of ground-based equipment. Gratifyingly, the NRC stands up strongly to defend Arecibo, whose role in asteroid observation is crucial, and also voices strong support for radar observations at the Goldstone Deep Space Communications Complex. From the report:

…the complementary radar systems at Arecibo and Goldstone are powerful facilities for characterization within their reach in the solar system, a maximum of about one-tenth of the Earth-Sun distance. Arecibo, which has a maximum sensitivity about 20-fold higher than Goldstone’s, but does not have nearly so good sky coverage as Goldstone, can for example, model the three-dimensional shapes of (generally very odd-shaped) asteroids, and estimate their surface characteristics, as well as determine whether the asteroid has a (smaller) satellite or satellites around it, all important to know for planning active defense. Radar can also accurately determine orbits of NEOs, from a few relatively closely spaced (in time) observations, which has the advantage of being able to quickly calm public fears (or possibly, in some cases, show that they are warranted).

Immediate action is required to ensure the continued operation of the Arecibo Observatory at a level sufficient to maintain and staff the radar facility. Additionally, NASA and NSF should support a vigorous program of radar observations of NEOs at Arecibo and NASA should support such a program at Goldstone for orbit determination and characterization of physical properties. 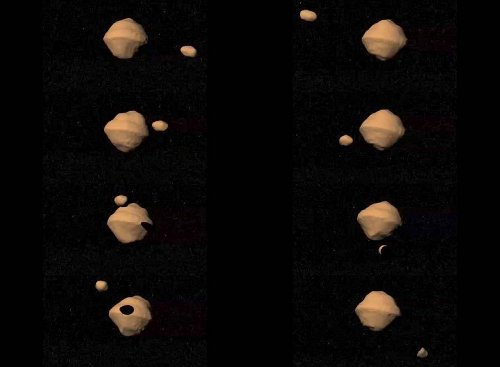 Image: Renderings of binary near-Earth asteroid 1999 KW4 showing its satellite making one orbit. The figure shows three-dimensional models in shaded relief, reconstructed from a set of radar images obtained at Arecibo and Goldstone in 2001. The models are shown in their proper orientation as viewed from Earth. Radar imaging has shown that ~15 percent of NEOs larger than 200 meters in diameter have one (or sometimes two) satellites. SOURCE: S.J. Ostro et al., Radar reconnaissance of near-Earth asteroids, pp. 143-150 in Near Earth Objects, Our Celestial Neighbors: Opportunity and Risk (A. Milani et al., eds.), Proceedings of the 236th Symposium of the International Astronomical Union, Prague, Czech Republic, August 14-18, 2006, Cambridge University Press, Copyright 2007 International Astronomical Union.

The asteroid or comet that struck the Yucatan some 65 million years ago is estimated to have been about ten kilometers in diameter, the kind of object that strikes the Earth only once every 100 million years on average. An object 140 meters in diameter, the size mandated by the survey requested of NASA, would cause regional damage, with impacts happening on average every 30,000 years, according to the report.

What to do if an NEO is discovered on a collision course with the Earth? The alternatives include using a ‘gravity tractor’ or other ‘slow push’ methods to move the object, but these are more practical for smaller objects (up to 100 meters in diameter) and would require decades of warning time. Changing a NEO’s orbit by flying a large spacecraft into it might also require warning times longer than we would necessarily have. Larger NEOs (with diameters greater than one kilometer) would demand the nuclear option:

…current technology allows us to deliver payloads for mitigation to NEOs in a wide range of orbits. However, in cases of short warning (under, say, a decade), payloads are likely to be severely limited in mass, but may often be sufficient to deliver a nuclear device. The development of the next generation of heavy-lift launch vehicles will considerably improve the situation. The development of advanced engines for in-space propulsion will considerably improve our capability for delivering rendezvous payloads (for characterization, to act as gravity tractors, or to emplace surface explosives) when the warning time is decades. 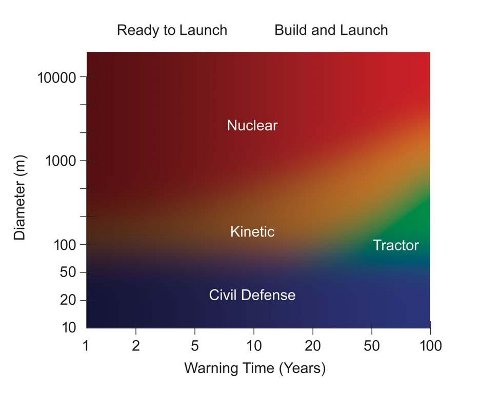 Image: Approximate outline of the regimes of primary applicability of the four types of mitigation (see report for the many caveats associated with this figure). Image Courtesy of Tim Warchocki.

The problem we face is that while these methods may work on paper, we’re not ready to put any of them to work on short notice. We also lack basic information about the kind of target we would be trying to deflect or destroy. Because of this, the report recommends a new program dedicated to more fully dealing with the hazards of NEOs:

We’re left, too, with the question of how small an NEO can be before we safely disregard it. The 1908 impact at Tunguska devastated more than 2000 square kilometers of forest. And while earlier estimates for the size of this object have been around 70 meters in diameter, there is recent research indicating the object could have been as small as 30 meters in diameter. That conclusion is, the report notes, preliminary, but because smaller objects are more numerous than larger ones, the likelihood of such an impact event is approximately once every three centuries. We also need to learn more about airbursts from impactors in this size range and whether they can cause tsunamis that damage coastlines.

Space missions like NEAR Shoemaker and Hayabusa have given us information on two NEOs, and what we’ve learned is that Eros and Itokawa are dissimilar in many ways. From these missions and ground-based observations, we’ve learned that NEOs have a wide range of internal structures and more complex surfaces than had been realized. It’s clear that we need to learn more about these properties through further dedicated space missions if we’re to develop the strategies that will ensure we can move or destroy a NEO.

You can get a copy of the NRC report “Defending Planet Earth: Near-Earth Object Surveys and Hazard Mitigation Strategies” through the National Academies Press. It’s absorbing reading as we consider the problem of how to deal with a threat that may be exceedingly rare but potentially catastrophic. Our technology is only now getting to the point where we have the capability of affecting the trajectory of an incoming asteroid, depending upon its mass and the amount of advance warning we have. My belief is that a space-based infrastructure developing over the next century will come to play an essential role in safeguarding our planet.