A Cool, Nearby Brown Dwarf

We push deeper into the mysteries of brown dwarfs with the discovery of SDSS 1416+13B, an object orbiting another brown dwarf between fifteen and fifty light years from the Sun. The new dwarf, discovered in data collected by the United Kingdom Infrared Telescope (UKIRT) in Hawaii, is visible only in infrared light. Philip Lucas (University of Hertfordshire) cautions that there remains much we don’t know about the telescope’s latest find:

“This looks like being the fourth time in three years that the UKIRT has made a record breaking discovery of the coolest known brown dwarf, with an estimated temperature not far above 200 degrees Celsius. We have to be a bit careful about this one because its colors are so different than anything seen before that we don’t really understand it yet. Even if it turns out that the low temperature is not quite record breaking, the colors are so extreme that this object will keep a lot of physicists busy trying to explain it.”

The work grew out of a dedicated brown dwarf search called the UKIRT Infrared Deep Sky Survey. The data showed an object far bluer at near infrared wavelengths than any brown dwarf observed before. Follow-up studies with the Japanese Subaru Telescope show that SDSS 1416+13B is a T dwarf, a type of brown dwarf with a methane-laden atmosphere. Further work at longer wavelengths via the Spitzer Space Telescope allowed a temperature estimate of 500 Kelvin (227 degrees Celsius). Ben Burningham (University of Hertfordshire), who made the discovery, notes where it fits in our current understanding of these objects:

“The fact that it is a binary companion to a warmer brown dwarf that also has an unusual spectrum is helping us to fill in some gaps in our understanding. It seems likely that both brown dwarfs are somewhat poor in heavy elements. This can be explained if they are very old, which also fits with the very low temperature of the faint companion.”

Interesting stuff. The team cautions that its parameters for this system are preliminary, but comes up with a possible separation of 45 to 135 AU for the binary pair. The system’s estimated age: 10 billion years. Take a look at the near-infrared spectrum from Subaru: 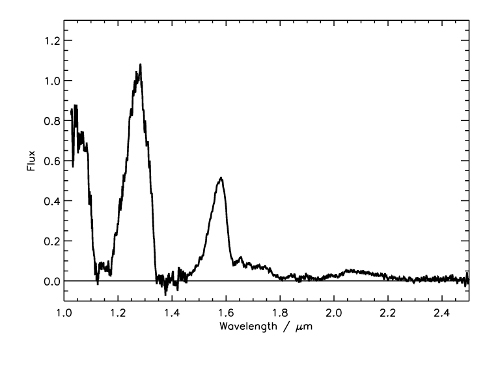 Image: Subaru near-infrared spectrum of SDSS1416+13B, taken with the IRCS spectrograph. The almost total absence of light at wavelengths between 1.7 and 2.5 microns reflects the low metal content and high gravity at the surface of the brown dwarf, and results in its very blue near-infrared color. These same physical properties enhance the brightness in the mid-infrared, and so the color flips to red when the near-infrared is compared with data from the Spitzer Space Telescope. Credit: Subaru Telescope (NAOJ), University of Hertfordshire.

Brown dwarfs become more and more intriguing, given their evidently high numbers and the possibility of one or more being found closer to us than the Centauri stars. The WISE mission should be able to find such an object, if it is there. In the meantime, sharpening our skills at observing these objects helps us chart the terrain between stars and gas giants. The paper is Burningham et al., “The discovery of a very cool binary system,” accepted for publication in Monthly Notices of the Royal Astronomical Society (preprint available).