Toward an Interstellar Archaeology

That’s the term used by Richard Carrigan (Fermi National Accelerator Laboratory) in his latest work on what he calls ‘interstellar archaeology,’ the search for cosmic-scale artifacts like Dyson spheres or Kardashev civilizations. A Fermi bubble would grow as the civilization creating it diffused through space. Carrigan notes that, as Carl Sagan and others observed, the time to colonize an individual system is small compared to the travel time between stars. An expanding front of colonization might then move forward at a rate roughly comparable to the space travel velocity. A civilization could engulf its galaxy on a time scale comparable to the rotation period of the galaxy, and perhaps a good bit shorter. 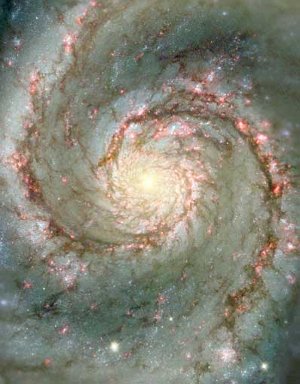 You might think a galaxy like the M51 Whirlpool galaxy would be ideal for such study, but Carrigan says a rough qualitative estimate shows there are no unexplained ‘bubbles’ at the level of 5 percent of the M51 galactic area. The quest is tricky because spiral galaxy structure includes natural voids — even if a void in visible light with infrared enhancement were traced, it would be hard to regard it as anything other than natural. In fact, James Annis has suggested that elliptical galaxies , which exhibit little structure, might be a better place to look for Fermi bubbles than spiral galaxies. Whatever the case, we’ve moved a long way from conventional SETI, listening for intentional transmissions from other civilizations.

Where else could we turn in the study of interstellar archaeology? Theoretically, synthetic or unnatural constituents in an exoplanet atmosphere could one day show us a sign of ETI. We’re already managing to study the atmospheres of particular gas giants, but thus far we lack the spectral sensitivity to clearly identify atmospheric signals of life or intelligence. A better bet might be stellar spectral signals, looking for example for signs of nuclear fission waste products that have been disposed of inside a star. More intriguing still is the idea of spectral modulation in stars nearing the end of their lives. Writes Carrigan:

…in the red giant phase Earth will most likely be swallowed as the sun expands. On the other hand if there was some possibility of life continuing the situation might engender a spirit of grand engineering and also an urge to communicate. In many cases the red giant environment generates varying maser signals. Modulation could emerge from dust clouds… moving and transforming in the spirit of weather systems on the Earth. (“Dust clouds” here is used to describe dust clumps around a star.) Modulation could also arise from linking the magnetic field from a Jupiter-scale planet and the stellar equivalent of the solar wind.

As to those Dyson spheres, their use would greatly expand the useful area for activities for any culture that could build them, absorbing most or all visible light and re-radiating the energy of the star at lower temperatures. Various searches for infrared excesses around visible stars –hoping to target a partial Dyson sphere, perhaps a ring — have been attempted, but no candidates emerged from searches of several thousand stars. Even a pure Dyson sphere, completely surrounding its star, is a tricky catch because there are natural objects that mimic it, especially since dust clouds surround stars as they are born and as they die.

Carrigan used data from the IRAS spacecraft’s database of low resolution spectra, discarding objects that had been previously well categorized and narrowing the sample to sixteen sources that he calls ‘mildly interesting.’ The result:

Only three of these had relatively low spectral statistical fluctuations. All of the sixteen sources have some feature which clouds their identification as a Dyson sphere. In practice, most of the LRS candidates have higher temperatures and just don’t look much like the spectrum expected from a Dyson sphere. The search suggests that there are few if any even mildly interesting candidates within several hundred light years of Earth.

What can we do to sharpen the search for objects like Dyson spheres? Carrigan adds:

…a Dyson sphere does not require intent to communicate on the part of a civilization. The current detection reach is comparable to a SETI search. However there is a problem of confounding signatures from mimics such as carbon stars. Searches for potential Dyson spheres would be sharpened by developing more realistic pictures of construction scenarios including such factors as time to build and approaches to stability… Finally it would be interesting to consider how stellar evolution might stimulate the necessity of such large scale structures with a view to looking at candidate objects in the later stage of evolution along the main sequence.

A Parallel Track for SETI 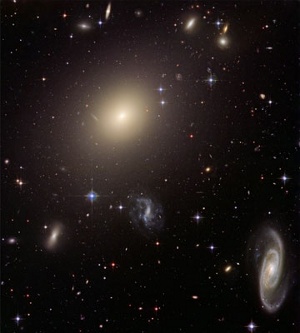 When we contemplate the kind of structures or effects sought by the interstellar archaeologist, we acknowledge they demand technologies so far beyond our own that their construction seems all but miraculous. We can look for Dyson spheres, for example, but scarcely imagine how a culture could build at this scale. But these are limitations of our own state of development, and they don’t keep us from extrapolating to what civilizations far older than our own might be capable of developing.

Image: A Hubble Space Telescope view of the diverse collection of galaxies in the cluster Abell S0740, some 450 million light-years away in the direction of the constellation Centaurus. The giant elliptical looms large at the cluster’s center. Would we be able to detect signs of interstellar engineering in such an object? Credit: NASA, ESA, and the Hubble Heritage (STScI/AURA)-ESA/Hubble Collaboration.

As we supplement existing SETI searches with the search for interstellar artifacts, we have much to do to separate natural signatures from possible signs of intelligence, but engineering on a stellar or even galactic scale should be observable if our imaginations give us a serious hint of what to look for.

The paper is Carrigan, “Starry Messages: Searching for Signatures of Interstellar Archaeology” (preprint available). Highly recommended especially for its overview of current scholarship on the subject, including the fascinating work of James Annis and his search for Kardashev Type III civilizations. Note this on Annis’ work:

The distribution of galaxies on a plot of galactic optical brightness or luminosity versus the maximum rotation velocity or radius of the galaxy follows a fairly consistent pattern. Cases lying below the typical galactic trend line reflect visible light that has been absorbed and emitted somewhere else in the electromagnetic spectrum. Annis examined existing distributions for spiral and elliptic galaxies and looked for sources below the normal trend lines where more than 75% of the visible light would have been absorbed. No candidates were found in a sample of 137 galaxies. From this Annis inferred a very low probability of a Type III civilization appearing that would be found using this search methodology.

But Carrigan goes on to say:

With more recent information it is possible to extend the search to samples that are considerably larger and also more robust. It may be time to revisit this possibility. In particular with a sample ten to one hundred times larger one could examine the nature of a handful of outliers in more detail looking for any unique features such as a higher than normal infrared component. These outliers might be candidates for a radio SETI search.

Be aware as well of Martyn Fogg’s Planetary Engineering Bibliography, another useful source for sharpening our understanding of what future engineers might do.