To measure the brightness of a star, astronomers compare it to standard reference stars. You would think measurements of the latter would be highly refined by now, but as this New Scientist story points out, the bright star Vega’s most accurate measurements date back to the 1970s. That puts the focus on a new space telescope, or maybe New Scientist‘s term ‘rocket-borne’ is better here, because the ACCESS experiment will actually not go into orbit, but will make four suborbital flights to make measurements lasting only minutes. 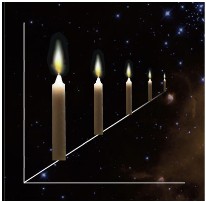 ACCESS (Absolute Color Calibration Experiment for Standard Stars) will look at four common reference stars: Sirius, Vega, and two much fainter objects, HD 37725 and BD+17◦4708, with observing time limited to about 400 seconds. That’s not much time, but it’s enough for ACCESS to gauge the brightness of the four reference stars to a precision of one percent and perhaps better, twice the precision of today’s measurements.

Image: Standard Candles are used to calculate astronomical distances.Each of these candles has the same intrinsic luminosity, the only difference is the distance from the observer. Credit: Lawrence Livermore National Laboratory/Universe Adventure.

The accuracy ACCESS will provide is significant because for all the advances we’ve made in instrumentation and calibration, we haven’t been able to transfer those tolerances to our brightness measurements across wavelengths ranging from the visible to the near-infrared. The paper notes an additional problem:

…the absolute normalization of the current astrophysical flux scale is tied to a single star, Vega, a star that is too bright to be observed with today’s premier optical telescopes.”

and goes on to say:

Systematic errors associated with problems such as dark energy now compete with the statistical errors and thus limit our ability to answer fundamental questions in astrophysics.

In other words, ACCESS will play a role in the ongoing investigation into dark energy. Recall that the accelerated expansion of the universe was discovered by studying the brightness of high redshift Type Ia supernovae and comparing them to low-redshift supernovae of the same category. It was found that at a given redshift, the peak brightness of the supernovae was fainter than predicted. The best explanation: These ‘standard candles’ are actually further away than we thought, which means accelerated expansion of the universe, and thus the presence of dark energy, a negative-pressure energy component in the cosmos.

Pushing dark energy studies forward requires highly accurate measurements of brightness, especially since several models have been proposed to explain how dark energy functions, each capable of being tested observationally. The tiniest variations in the expansion rate as the universe grew could be the clue to learning whether we’re dealing with a fundamental new force or evidence of a flaw in our understanding of gravity. Thus ACCESS:

…a sub-orbital program that will enable a fundamental calibration of the spectral energy distribution of bright primary standard stars, as well as stars 10 magnitudes fainter, in physical units through a direct comparison with NIST traceable irradiance (detector) standards. Each star will be observed on two separate rocket flights to verify repeatability to <1%, an essential element in establishing standards with 1% precision.

So ACCESS, whose first flight should be within two years, is all about validating our fundamental standards for astronomical observation. Without it, combining brightness data from multiple telescopes could be misleading. Any talk of new forces should excite our interest as well as our skepticism, but the evidence for continuing expansion is sound and will benefit from further study with the ACCESS results in mind. The paper is Kaiser et al., “ACCESS: Enabling an Improved Flux Scale for Astrophysics,” from Proceedings of the 18th Annual CALCON Technical Conference, 2009 (available online).