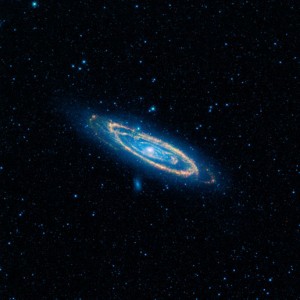 We’re keeping a close eye on the WISE mission (Wide-field Infrared Survey Explorer) and the possibility of identifying brown dwarfs closer to our Sun than the Centauri stars. But WISE’s targets are numerous, and the early imagery coming back from the mission is promising indeed. To check out the capabilities of this space-based observatory, have a look at some of the new photos, which show M31, the Andromeda galaxy, at a variety of wavelengths. The first image was made with all four of WISE’s infrared detectors — the caption describes the color coding.

Image: The immense Andromeda galaxy, also known as Messier 31 or simply M31, is captured in full in this new image from NASA’s Wide-field Infrared Survey Explorer, or WISE. The mosaic covers an area equivalent to more than 100 full moons, or five degrees across the sky. WISE used all four of its infrared detectors to capture this picture (3.4- and 4.6-micron light is colored blue; 12-micron light is green; and 22-micron light is red). Blue highlights mature stars, while yellow and red show dust heated by newborn, massive stars. Credit: NASA/JPL-Caltech/WISE.

Notice the two satellite galaxies above Andromeda and to the left of center and also the blue M110 directly below the center of the spiral arms. Like our Milky Way with its Magellanic clouds, Andromeda has a number of these satellite galaxies gravitationally bound to it. Now compare this to Andromeda as seen by WISE’s shortest wavelength camera, where the disk takes on a modified, warped shape, doubtless the result of an ancient galactic interaction: 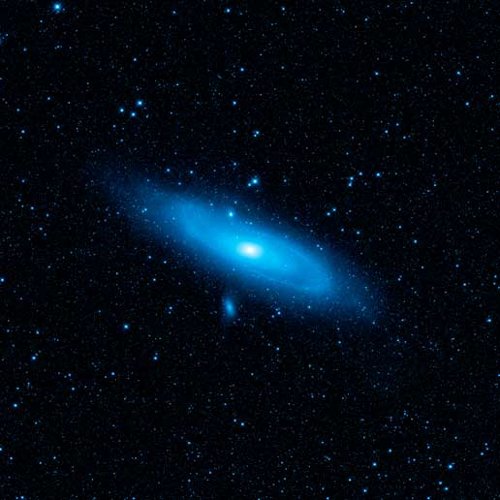 Image: This image from WISE highlights the Andromeda galaxy’s older stellar population in blue. It was taken by the shortest-wavelength camera on WISE, which detects infrared light of 3.4 microns. A pronounced warp in the disk of the galaxy, the aftermath of a collision with another galaxy, can be clearly seen in the spiral arm to the upper left side of the galaxy. Credit: NASA/JPL-Caltech/WISE.

And finally, note M31 as seen by the longest-wavelength detector aboard WISE. Here the spiral arms can be traced all the way to the center of the galaxy, outlined by the hot dust being heated by the formation of new stars, with star formation visible as well in the satellite galaxies M32 and M110. 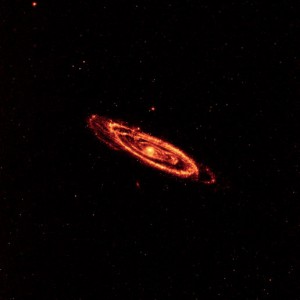 Image: This image from WISE shows the dust that speckles the Andromeda galaxy’s spiral arms. It displays light seen by the longest-wavelength infrared detectors on WISE (12-micron light has been color coded orange, and 22-micron light, red). Credit: NASA/JPL-Caltech/WISE.

With capabilities like these, WISE’s discoveries not just far afield but in nearby space should be numerous, its targets ranging from asteroids and comets to the aforementioned brown dwarfs. Principal investigator Ned Wright (UCLA) calls the incoming imagery ‘a candy store of images coming down from space,’ and for good reason. Have a look below at the Siding Spring comet, which passed about 1.2 AU from the Earth and 2.25 AU from the Sun in October of last year. This interloper from the Oort Cloud, also called C/2007 Q3, is now leaving the inner regions of the system and heading back out to deep space. 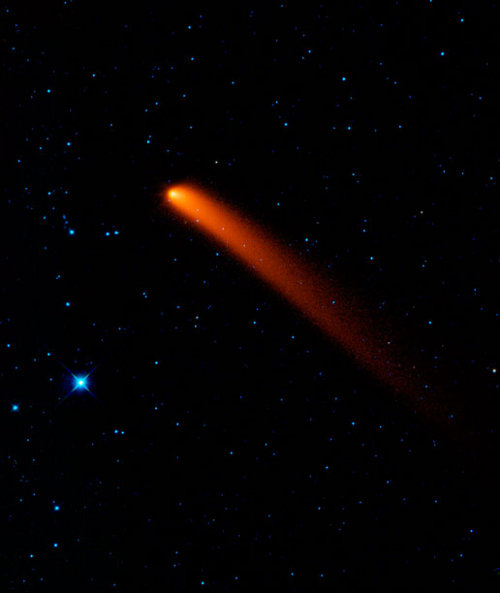 Image: Astronomers will use these measurements to learn about the comet’s size, composition, reflectivity, and the size and makeup of the dust particles in its coma (the hazy cloud surrounding its nucleus) and its tail. WISE data on this and other comets will help unlock clues that lay within these icy time capsules, teaching us about our solar system’s evolution. In this image, 3.4-micron light is colored blue; 4.6-micron light is green; 12-micron light is orange; and 22-micron light is red. It was taken on Jan. 10, 2010. Credit: NASA/JPL-Caltech/UCLA.

That cometary tail, by the way, stretches about sixteen million kilometers. The mood around the WISE mission seems celebratory as these early images point to the spacecraft’s prowess. Says project scientist Peter Eisenhardt (JPL):

“All these pictures tell a story about our dusty origins and destiny. WISE sees dusty comets and rocky asteroids tracing the formation and evolution of our solar system. We can map thousands of forming and dying solar systems across our entire galaxy. We can see patterns of star formation across other galaxies, and waves of star-bursting galaxies in clusters millions of light years away.”

Tracking comets and asteroids is a secondary mission for WISE, but we’re learning that it’s a capable and sensitive observer of objects near and far. For those of us with a brown dwarf fixation, we should know much more about their numbers in nearby interstellar space by late this year, adding to our catalog of these objects as the whole-sky infrared sweep is concluded. WISE already has an asteroid under its belt, a near-Earth object discovered on January 12, and it will be scanning the sky one and a half times until October, when its coolant will run out.