When you’re studying galaxy clusters, it doesn’t pay to be in a hurry. Harald Ebeling (University of Hawaii) is an expert on the matter, working with a catalog of over a thousand such clusters in a new study of the so-called ‘dark flow,’ the apparent motion of galaxy clusters along a path centered on the southern constellations Centaurus and Hydra. Says Ebeling:

“It takes, on average, about an hour of telescope time to measure the distance to each cluster we work with, not to mention the years required to find these systems in the first place. This is a project requiring considerable followthrough.”

The study, led by Alexander Kashlinsky (NASA GSFC), relies on hot X-ray emitting gas within a cluster, which scatters photons from the cosmic microwave background. The wavelength of scattered photons then tells us something about the motion of individual clusters. This tiniest of shifts in the CMB’s background temperature in the cluster’s direction, known as the Sunyaev-Zel’dovich effect, is small enough that it has never been measured in a single galaxy cluster. That’s where the large number of clusters comes in. The researchers used a catalog of 700 clusters from a 2008 study and folded in another 700, along with results from the Wilkinson Microwave Anisotropy Probe. All of which is complicated enough without throwing in unexpected results.

You would assume that in relation to the CMB, all large-scale motion would be random, but the ‘dark flow’ appeared in the data in 2008, and the new study extends the motion to twice the distance previously reported. Kashlinsky says it persists to as far as 2.5 billion light years away, even if the direction of motion is now considered unresolved. “We detect motion along this axis, but right now our data cannot state as strongly as we’d like whether the clusters are coming or going,” says Kashlinsky, but the motion itself is what is controversial, suggesting structure beyond the visible universe that is pulling on matter that we can see. 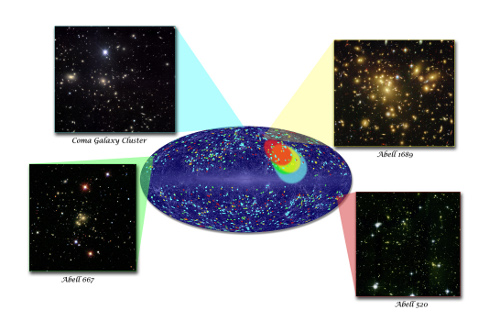 Image: The colored dots are clusters within one of four distance ranges, with redder colors indicating greater distance. Colored ellipses show the direction of bulk motion for the clusters of the corresponding color. Images of representative galaxy clusters in each distance slice are also shown. Credit: NASA/Goddard/A. Kashlinsky, et al.

So now we can add the ‘dark flow’ to the other great ‘dark’ imponderables, like dark energy and dark matter. All, of course, are the subject of further investigation, and more on that tomorrow. For now, I see that the dark flow will be the subject of new studies with the latest WMAP data, along with information gleaned from the European Space Agency’s Planck mission, which is giving us another look at the microwave background.

Next post: General Relativity Holds Up Under Galactic Test