A Problem with ‘Standard Candles’?

Type Ia supernovae have become important ‘standard candles’ in judging cosmic distances, telling us how far away the host galaxy of a given supernova is. The idea here is that this kind of supernova produces a consistent luminosity because the white dwarfs that explode in the process are of uniform mass. The Type Ia supernova happens like this: A white dwarf gathers material from a companion star, growing in pressure and density so that the dwarf approaches the Chandrasekhar limit, beyond which it cannot support its own weight. 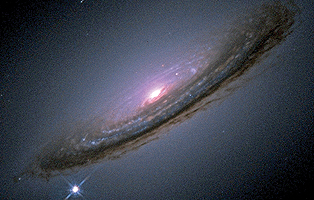 The result is a violent explosion that, like Cepheid variable stars, offers astronomers a way to gauge distances, and thereby to probe the shape of the cosmos at various distances and eras. Just how fast is the universe expanding, and in what ways? It was in 1998, prompted by supernovae of this kind, that the High-z Supernova Search Team discovered that the universe was not only expanding, but that its expansion was accelerating. Suddenly we were talking about ‘dark energy,’ which evidently operated against the gravitational force and seemed to offer a cosmic future in which the universe expanded without end.

Image: Cosmologists use Type Ia supernovae, like the one visible in the lower left corner of this galaxy, to explore the past and future expansion of the universe and the nature of dark energy. Credit: High-Z Supernova Search Team, HST, NASA.

It’s significant, given the importance of Type Ia supernovae in this analysis, that we’re now talking about exceptions to the Chandrasekhar limit, which is a critical mass of about 1.4 times that of the Sun. Four supernovae since 2003 have been discovered whose white dwarfs evidently surpassed the limit, the events being dubbed ‘super-Chandrasekhar’ supernovae. Richard Scalzo (Yale University) and a team of American and French physicists have measured the mass of one of the white dwarfs involved in the supernova SN 2007if, finding that it did indeed exceed the Chandrasekhar limit. Now work intensifies on modeling its structure.

Measuring the mass of the central star along with a shell of material ejected in the explosion and a surrounding envelope of pre-existing material, Scalzo and crew determined that the star had a mass of 2.1 times that of the Sun, significantly above the limit. So what’s going on here? In the paper on this work, Scalzo speculates that SN 2007if is the result of the merger of two white dwarfs, but other possibilities are also discussed in a paragraph that seems quite significant for our studies of dark energy:

The single-degenerate scenario… ensures that the white dwarf slowly approaches MCh [the Chandrasekhar mass limit] via accretion from a non-degenerate companion. In contrast, the double-degenerate scenario…, in which two white dwarfs in a binary system merge and explode, provides a way for SN Ia progenitors to exceed MCh and to give rise to more luminous events… There may therefore be a population of SNe Ia with a distribution of masses greater than MCh, with different explosion physics that interferes with luminosity standardization [italics mine].

And here is the nub of the problem:

The relative rate of such events among SNe Ia in general may also depend on redshift, and unless they can be identified or their luminosities accurately calibrated, they need not be common to produce significant biases in reconstructions of the dark energy equation of state.

Let me quote Scalzo as well from this Yale University news release on the same point:

“Supernovae are being used to make statements about the fate of the universe and our theory of gravity. If our understanding of supernovae changes, it could significantly impact our theories and predictions.”

And that’s why a paper studying a rare type of star that seems to ignore the Chandrasekhar limit swims into focus as we discuss a much broader issue. We’ve been speculating about the nature of dark energy for some time in these pages, even wondering if it might offer a clue to a far-future propulsion system by harnessing a force that appeared to operate against gravity. Now we find evidence that at least in some rare instances, the standard candles used in this work may be suspect. We need to find out how such supernovae can exist above the Chandrasekhar limit and learn whether they exist in sufficient numbers to compromise our measurements of the universe’s expansion.

The paper is Scalzo et al., “Nearby Supernova Factory Observations of SN 2007if: First Total Mass Measurement of a Super-Chandrasekhar-Mass Progenitor,” to be published in the Astrophysical Journal (preprint available).