Black Holes, Starships and the Cosmos

Louis Crane’s work at Kansas State University caught my eye some time back, but I was uncomfortable trying to explain it when I knew polymath Adam Crowl had so much better insight into Crane’s thinking than I did. One thing led to another, and now we can get an overview of Crane’s thoughts on black holes and starships from Adam himself. As a source of power, an artificially created black hole dwarfs alternatives, but the most intriguing possibility here is that a sufficiently advanced civilization might be able to use such a power source to propel a starship. Is forty years to Alpha Centauri a reasonable expectation with such technology? Read on.

Infinities in physics are usually a sign that something has gone wrong with theory. Towards the end of the 19th Century classical physics when applied to the heat emission from a uniformly heated cavity predicted an infinite amount of ultraviolet emissions – the so-called “ultraviolet catastrophe.” In 1900 Max Planck solved the puzzle by assuming energy was emitted in discrete amounts – quanta – and thus quantum theory was born. Similarly the gravitational collapse of stars, according to classical Newtonian gravity and 19th Century thermodynamics, should allow the release of an infinite amount of energy as the mass became infinitely small – an infinity eliminated by the theory of relativity.

Thus when infinities arise from attempts to combine quantum theory and general relativity (the modern theory of gravity) many physicists believe the theory is in error and a new quantum gravity is needed to eliminate the messy infinities. String theory is one such quantum gravity theory, but several other approaches exist. Loop-quantum gravity, for example, has been explored extensively by theorists like Lee Smolin. No clearly correct resolution to the puzzle has yet been found, but many researchers are hopeful in their quest. See this recent New Scientist story on approaches to ‘theories of everything.’

Intelligent Life and the Cosmos 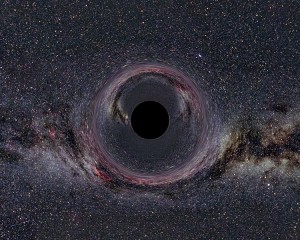 One researcher in quantum gravity is professor Louis Crane, at Kansas State University, who has been working on quantum gravity theory his whole professional life. One question prompted by his investigations is of particular relevance to interstellar travel – what is the relationship between intelligent life and the Cosmos? Lee Smolin proposed a theory in which different kosmoi (the plural of ‘kosmos’) reproduce and evolve via producing slightly different daughter kosmoi – the daughter kosmoi being generated by the formation of black holes. Black holes form via stars, and stars are friendly to life, thus there is a connection, albeit accidental. Louis Crane wasn’t convinced an accidental connection was direct enough, so he wondered: Could intelligent life make black holes? And if so why?

Image: Will future civilizations be able to create black holes for use in propelling a starship? Credit: Ute Kraus.

As Einstein’s relativity has taught us, mass is equivalent to energy, immense amounts of energy. A kilogram of mass is equivalent to 90,000 trillion joules of energy. However matter, in the form of particles, is incredibly difficult to turn into energy. Several conservation laws are observed to operate in the many interactions and transmutations that particles can undergo in the high energy collisions studied in particle accelerators, and these laws prevent merely dissolving matter into energy. However in 1974 Stephen Hawking showed a link between gravity and quantum mechanics in the form of the entropy and implied temperature of the event horizons that wrap around the insides of black holes. This means that black holes radiate energy with a purely thermal output, seemingly violating the conservation laws that give particles their identities, effectively making black holes a means for converting matter into pure energy.

Thus civilizations might create artificial black holes in order to convert matter into pure energy. This process is immensely more powerful than any other known energy source in the Universe aside from the mutual annihilation of matter & antimatter. The difference is that Hawking radiation needs only regular matter to be fed into a black hole, not the inefficient creation of equal amounts of matter and antimatter from energy. To create useful amounts of energy a black hole has to be relatively small – the immense black holes created by the implosion of stars produce less than attowatts of power as the luminosity of a black hole is inversely proportional to its mass squared. To produce as much energy as a 100 watt light-bulb a black hole needs to mass 1.9 trillion tons. A million ton black hole would produce almost 360 trillion watts – in fact the energy output computation gets complicated as the black hole temperature becomes high enough to produce heavy particles via pair-production.

According to the high-energy equations used by Louis Crane the actual energy produced by a million ton black hole is 56 petawatts, the equivalent of 0.62 kilograms of mass-energy radiated away per second, meaning a lifespan of less than 17 years. To keep the black hole operating it has to be continually force-fed new mass, else it will eventually decay, exploding in an immense blast of high energy particles.

Such an immense power, 56 petawatts, is roughly 4000 times the total energy usage on planet Earth, thus black holes are over-kill as terrestrial power sources, but ideal for a different purpose – propelling starships. Very big ones. A million tons of starship surrounding a million ton black hole could use the black hole’s power as a photon drive and accelerate at about 0.01 gee. Such acceleration would allow a trip time to Alpha Centauri of about 40 years. If the starship could draw in mass from the interstellar medium its range would be effectively infinite. Such a “mass annihilation Bussard ramjet” would be the ultimate sub-light starship.

To Colonize the Universe

Louis Crane is sceptical of the suggested alternative space-drives – for example wormholes and warp-drives – since the negative energy needed to keep such distorted space-time stable has yet to be demonstrated in such large amounts. To colonize the Universe, Crane believes, intelligent life will need to create and control black holes, thus completing the circle which created that life in the first place. Kosmoi in which black holes can be created by intelligent activity and used to expand intelligence’s reach across that kosmos, would be favoured by the process of cosmic natural selection, since they produce more daughter kosmoi friendly to intelligent, star-faring life.

Some species of jelly-fish, the medusids, live a two-stage life-cycle – in one stage they’re immobile polyps that produce the second stage, the mobile medusa stage. One creates the other, and the other in turn recreates the first, in a never-ending cycle. Crane likens the process of cosmic creation by intelligent life, and the creation of life by those kosmoi, to the two-stage life-cycle of the medusid jelly-fish, what he calls the Meduso-Anthropic Principle.

Crane’s current research is to apply quantum gravity theory to the finer details of the process of creation and decay of low-mass black holes. The possible creation of miniature black holes by the LHC will help refine and constrain quantum gravity theory, perhaps even give us clues towards creating matter annihilating black holes. Another important area of research is the question of how to convert the intense radiation output from a black hole into a useful exhaust stream. The finer practicalities may well take centuries to achieve, but the implications go well beyond even the lifetime of our Universe, affecting the evolution of countless more daughter universes we may create in the aeons ahead.