Yesterday’s look at black holes and their potential role in generating energy for advanced civilizations flows naturally into newly released work from Xavier Hernandez and William Lee (National Autonomous University of Mexico). The astronomers have been studying how dark matter behaves in the vicinity of black holes, simulating the way early galaxies would have interacted with it. Current theory suggests that clumps of dark matter drew together gas that eventually became the stars and galaxies we see around us in the cosmos. 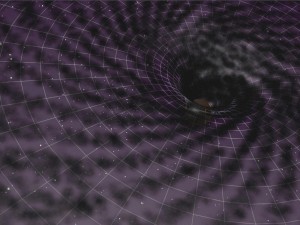 How to study material that is invisible save for its gravitational influence? Its effect on gravitational lensing is one way, but Hernandez and Lee have found another. The duo looked for clues in the massive black holes now thought to be at the center of most large galaxies. Assuming such black holes are common, then large haloes of dark matter have coexisted with massive black holes over most of the history of the universe. It follows that part of the growth of these central black holes has come at the expense of captured dark matter particles. By studying how central black holes grow through accretion, the scientists place upper limits on the maximum density of dark matter at the center of haloes.

We find the process to be characterised by the onset of a rapid runaway growth phase after a critical timescale. This timescale is a function of the mass of the black hole and the local density of dark matter. By requiring that the runaway phase does not occur, as then the swallowing up of the halo by the black hole would seriously distort the former, we can obtain upper limits to the maximum allowed density of dark matter at the centres of haloes.

Concentrate dark matter greater than 250 solar masses per cubic parsec, the authors find, and you get a runaway black hole, one that engulfs so much dark matter that the galaxy involved would be fundamentally changed.

“Over the billions of years since galaxies formed, such runaway absorption of dark matter in black holes would have altered the population of galaxies away from what we actually observe.”

This is how science often progresses, one tweak at a time, as we deepen our understanding of the dark matter that observation suggests must shape the galaxies around us. The paper is “An upper limit to the central density of dark matter haloes from consistency with the presence of massive central black holes,” accepted by Monthly Notices of the Royal Astronomical Society (preprint).