Ordinary baryonic matter (think protons and neutrons) is thought to account for no more than one-sixth of the total mass in the universe, the rest being dark matter that does not reflect or emit light. Usefully, though, dark matter does interact with the rest of the universe through gravity, and it can be probed by studying gravitational lensing. Here the light of distant galaxies is deflected by the gravity of foreground concentrations of mass. All matter, whether baryonic or dark, is sensitive to this effect, making it possible to study dark matter on a large scale.

Data from the Cosmic Evolution Survey (COSMOS) offer this possibility, revealing just how dark matter is distributed in the cosmos. And by supplementing COSMOS with redshift data, we’re finding that the survey offers clues to dark energy as well. But first, some background on how COSMOS data have been used in dark matter work. 1000 hours of Hubble observations from its Advanced Camera for Surveys (the largest project ever conducted by Hubble) were the cornerstone of this work.

Structure on the Largest Scale

If COSMOS is gigantic (covering 1.6 square degrees of sky, about nine times the area of the full Moon), the survey has been supplemented with spectra from the European Southern Observatory’s Very Large Telescope and imagery from the Subaru and CFHT telescopes in Hawaii, as well as data from the ESA’s XMM/Newton space observatory. In 2007 we saw the result: Confirmation of the idea that normal matter accumulates along the densest concentrations of dark matter. The map shows a network of filaments that intersect in massive structures that correspond to the location of galactic clusters. From the paper on this work:

Our results are consistent with predictions of gravitationally induced structure formation, in which the initial, smooth distribution of dark matter collapses into filaments then into clusters, forming a gravitational scaffold into which gas can accumulate, and stars can be built.

The ‘scaffold’ metaphor is powerful, and the image below offers the overview: 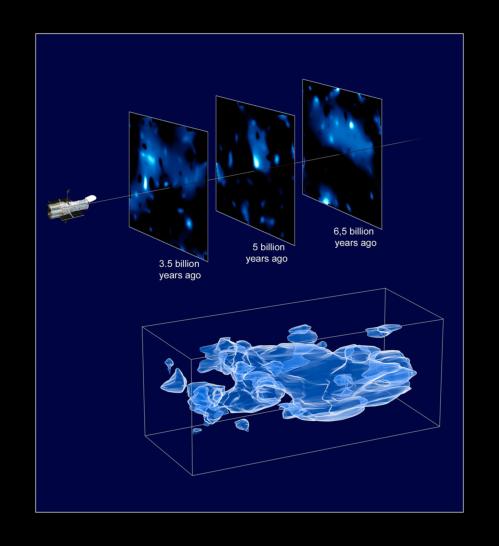 Image: This three-dimensional map offers a first look at the web-like large-scale distribution of dark matter, an invisible form of matter that accounts for most of the Universe’s mass. The map reveals a loose network of dark matter filaments, gradually collapsing under the relentless pull of gravity, and growing clumpier over time. This confirms theories of how structure formed in our evolving Universe, which has transitioned from a comparatively smooth distribution of matter at the time of the big bang. The dark matter filaments began to form first and provided an underlying scaffolding for the subsequent construction of stars and galaxies from ordinary matter. Credit: NASA, ESA and R. Massey (California Institute of Technology).

The implication is that without dark matter, the universe would not have contained enough mass for structures to collapse and galaxies to form. The map extends roughly halfway back to the beginning of the universe and reveals the increasingly clumpy character of dark matter as it collapses under gravity. The international team behind this work is saying that the map goes beyond inferences of dark matter to direct observations revealing its effects.

Understanding how dark matter is distributed in space and time is essential if we’re to make sense of the way galaxies appeared and clustered. And this is interesting: The galaxies with active star formation are found in less populated voids and dark matter filaments. Says Nick Scoville (Caltech):

“It is remarkable how the environment on the enormous cosmic scales seen in the dark matter structures can influence the properties of individual stars and galaxies – both the maturity of the stellar populations and the progressive “down-sizing” of star formation regions to smaller galaxies is clearly dependent on the dark matter environment.”

I bring all this up as necessary background for the more recent dark energy work, which likewise taps the COSMOS survey and its 575 overlapping views of the same part of the universe. For galactic clustering provides clues to dark energy, whose repellant force on matter may have influenced dark matter clumps. The evolution of what we see in the cosmos today is driven on the one hand by gravitational collapse and on the other by the accelerating expansion of the universe. Here I’ll quote Ludovic Van Waerbeke (University of British Columbia), who has worked with a team led by Tim Schrabback (Leiden University) in studying the 446,000 galaxies in the COSMOS field. The researchers supplemented the Hubble data with redshift data from ground telescopes to assign distances to 194,000 of the COSMOS galaxies.

Van Waerbeke lays out the findings:

“Our results confirmed that there is an unknown source of energy in the universe which is causing the cosmic expansion to speed up, stretching the dark matter further apart exactly as predicted by Einstein’s theory.”

Here the dark matter is crucial, for the analysis depends upon the large-scale distribution of matter. Schrabback’s team worked with algorithms designed to make sense of the distorted shapes of distant galaxies as affected by weak gravitational lensing. The notion of a universe composed of dark matter, normal baryonic matter and dark energy receives powerful support:

“Dark energy affects our measurements for two reasons. First, when it is present, galaxy clusters grow more slowly, and secondly, it changes the way the Universe expands, leading to more distant — and more efficiently lensed — galaxies. Our analysis is sensitive to both effects,” says co-author Benjamin Joachimi from the University of Bonn. 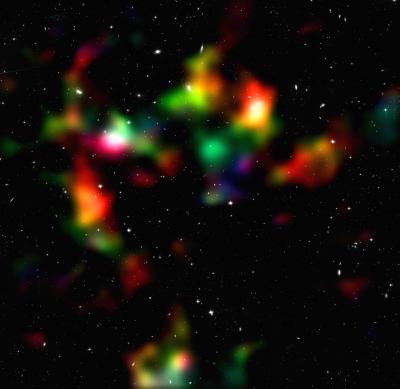 Image: This image shows a smoothed reconstruction of the total (mostly dark) matter distribution in the COSMOS field, created from data taken by the NASA/ESA Hubble Space Telescope and ground-based telescopes. It was inferred from the weak gravitational lensing distortions that are imprinted onto the shapes of background galaxies. The color coding indicates the distance of the foreground mass concentrations as gathered from the weak lensing effect. Structures shown in white, cyan and green are typically closer to us than those indicated in orange and red. To improve the resolution of the map, data from galaxies both with and without redshift information were used. The new study presents the most comprehensive analysis of data from the COSMOS survey. The researchers have, for the first time ever, used Hubble and the natural “weak lenses” in space to characterise the accelerated expansion of the universe. Credit: NASA, ESA, P. Simon (University of Bonn) and T. Schrabback (Leiden Observatory).

This fascinating work is proof of the power of gravitational lensing. We generate massive datasets that can be mined and, when mixed with confirmatory information from other venues, used to create a picture of the universe’s structure at the largest scale. In doing so, we’re learning how much the night sky that we can see is shaped by forces that we are only now becoming capable of studying.

For more on the dark energy work, the paper is Massey et al., “Dark matter maps reveal cosmic scaffolding,” Nature 445 (7 January 2007), pp. 286-290 (abstract). The upcoming paper on dark energy in Astronomy & Astrophysics is Schrabback et al., “Evidence for the accelerated expansion of the Universe from weak lensing tomography with COSMOS.” This ESA news release is helpful.