If we’re going to get lucky with SETI, it’s probably going to be through the reception of an interstellar beacon rather than the chance detection of an electronic emission from space. Sure, chance catches are possible, and for all we know odd receptions like the WOW! signal of 1977 might be cases in point. But we can’t confirm such signals because they’re one-shot affairs, whereas a beacon, designed to be received over interstellar distances, just might give us other options. 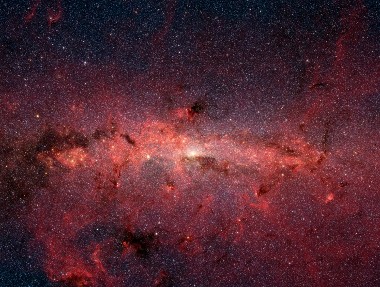 So what can we say about beacons? In a guest editorial for the SETI League, former NASA SETI signal detection analyst Bob Krekorian takes a shot at the problem. Krekorian assumes a space-faring species will put its transmitter inside the habitable zone, designed to exist as close to the parent star as feasible to take advantage of the huge amounts of energy available there. If we were building such a beacon, we might decide to place it between the orbits of Earth and Venus, for energy reasons and efficient servicing.

In any case, imagine a beacon that rotates synchronously as it orbits its star. Rather than sending out a beam in all directions, it operates so that, in Krekorian’s words, “a strip of declination is illuminated at its orbital opposition and conjunction modes.” The advantages of this more targeted method seem considerable, as the author goes on to explain:

For potential contactees, the result is a gain of two orders of magnitude in received power over an omni-directional antenna and elimination of the Doppler drift accelerations from both planetary rotation and orbital motion. Assuming a continuous wave or a pulse signal, the signal types expected, detection is a much easier proposition, since the signal trajectory does not cut across detection channels in the time-frequency plane during the observation period.

All of which has further implications for how we proceed:

When the assumption is made that the signal remains stationary in a channel, coherent detection (match filtering) methods can be used to significantly improve detection sensitivity. Finally, one of the biggest challenges facing potential SETI recipients like us or anybody is the monumental real time signal processing (computer operations per second) effort that is required, if all possible signal drift paths resulting from planetary rotation are considered.

A Galactic Test for Membership?

The problems in finding such a signal are, of course, enormous, and it’s interesting to speculate, as Krekorian goes on to do, about ways to increase the information rate in a communications channel. The Shannon-Hartley theorem shows us the connection between channel capacity (bits per second), bandwidth and signal-to-noise ratio (SNR). The interplay of these factors is intriguing because it sets up a potential test (what Krekorian calls ‘an entrance fee’) for joining any organization of communicating civilizations.

You would think, for example, that increasing bandwidth is always a preferable option, for it allows you to pump more bits per second into your signal. But this added channel capacity also adds more noise into the system, which means your signal-to-noise ratio becomes problematic. Having found a signal, here’s how we could cope with this at our end:

SNR is directly proportional to telescope collecting area, so once we find the signal, larger collecting areas can be built to recover SNR and take advantage of the high data rates. This puts some of the burden of maximizing channel capacity on the receiving party, maybe the entrance fee required to join the galactic telecommunication federation.

To Find an Interstellar Roadmap

Intriguing stuff, and it’s important to note Krekorian’s point here, which is that as SETI was formerly practiced at NASA, it proceeded in two ways. A targeted search looked at a single star for 1000 seconds, and an all-sky survey looked briefly throughout the celestial sphere. Both of these strategies would fail if we assume that a stellar orbital beacon of the kind Krekorian outlines is broadcasting. Let’s assume that any civilization smart enough to build such a beacon and powerful enough to keep it in operation would know the pitfalls emerging civilizations like ours would encounter. In that case, what would they do to make it obvious?

Is there, then, an interstellar roadmap that is, in Krekorian’s words, “obvious to every emerging civilization like us based on the fundamentals of physics, astrophysics and mathematics, especially number theory, to connect one to the broadcast”? Perhaps, as Krekorian muses in an earlier SETI League editorial, the acquisition signal will be in the form of a pointer that directs us to the primary communications channel. In any case, we would expect that extraterrestrials choosing to make themselves known would make the problem of detecting their signal as straightforward as possible. In the absence of government funding, we now rely on the private sector to uncover possible strategies.

Kepler is going to give us a better idea of how likely we are to find such a beacon. If terrestrial worlds in the habitable zones of their stars turn out to be relatively common, we’ll be spurred to ask why we have yet to receive a signal and ponder whether SETI’s methods are not, as Krekorian implies, severely behind the times. If terrestrial worlds are found to be scarce, the problem is magnified by the potential distance between us and possible senders. SETI will continue in either case, but so must the relentless effort to discover what methods would most reliably result in a signal, assuming there is one out there to be had.

Next post: Expect the Unexpected: Mimas and the LHC