Our knowledge of brown dwarfs is expanding rapidly, and with the help of the WISE mission, we will be able to build a much more complete catalog of such stars in our neighborhood. But look what the Hubble Space Telescope, in conjunction with the Gemini Observatory, has produced: A companion to a brown dwarf that gets us right back into the debate about how to define a planet. When Pluto was in question, we were faced with a true imbroglio. Now the question involves not a small but a large object, and forces us to consider whether its origins can make an object of acknowledged planetary mass something else instead.

But first, the imagery (this is, after all, a direct detection). The primary brown dwarf is 2M J044144, images of which were obtained as part of a survey of 32 young brown dwarfs in the Taurus star-forming region 450 light years away. Both objects are visible below: 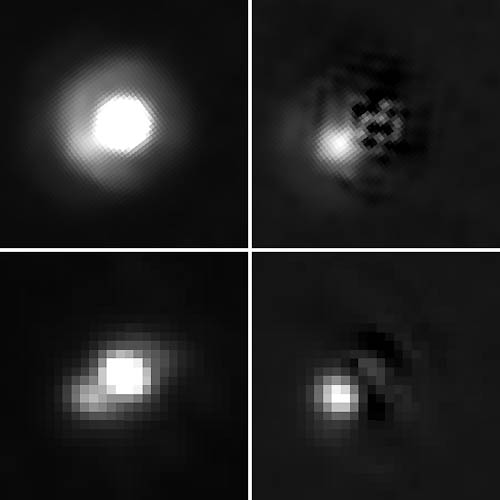 Image: Hubble Space Telescope (top) and Gemini North (bottom) images of the 2M J044144 system showing the smaller companion at 8:00 position. The companion has an estimated mass of between 5-10 times the mass of Jupiter. In the right panel of both the HST and Gemini images the brighter light from the brown dwarf has been removed to show the companion more clearly. Credit (top): NASA, ESA, and K. Todorov and K. Luhman (Pennsylvania State); (bottom): Gemini Observatory/AURA and K. Todorov and K. Luhman (Pennsylvania State University).

The primary brown dwarf weighs in at about 20 Jupiter masses, separated from the smaller body by 3.6 billion kilometers, which would put the latter between the distances of Saturn and Uranus in our own system. The question about the planetary status of the smaller object comes up because while its mass is consistent with other gas giants we’ve discovered, its age tells us that it may not have formed like a planet. Kevin Luhman (Pennsylvania State) has this to say:

“This is the youngest planetary-mass companion that has been found so far, and its extreme youth provides constraints on how it could have formed. The formation mechanism of this companion in turn can tell us whether it is truly a planet.”

Core accretion models of planet formation have a planet gradually forming within a circumstellar disk, a rocky core forming before the accumulation of a gas envelope. An alternative model relies on instability within the same disk, causing a clump of gas to collapse and form a gas giant on a short time-scale. But neither of these methods seems to apply here. The companion object did not have time to form in this young system by core accretion, and gravitational instability relies on having enough material to make an object of this mass.

We’re left with a third option, that this smaller object formed from the collapse of the cloud of dust and gas in much the same way that the primary star did. This is from the paper on this work, and refers not only to the system in question, but to the earlier discovered companion of the brown dwarf 2M J12073346, which was found in 2004:

This result is consistent with the rapid formation expected from both gravitational instability in disks and fragmentation of cloud cores. The latter is more likely to have produced these two secondaries given their relatively large masses compared to the primaries.

The formation models are shown below:

This would mean that the same process that makes binary stars can produce planetary-mass objects. If we define planets as objects that build up inside disks, then 2M J044144’s companion is not a planet. The idea gains weight by the observation that a nearby M-dwarf seems to have a brown dwarf companion of its own. Again quoting the paper:

In this presumed quadruple system, all four objects would have formed in the collapse of the same cloud. Objects that push up against our categories are cause for celebration. They force us to ponder the nature of our definitions, and to modify them to revise theory. Meanwhile, brown dwarfs will remain much on the minds of those interested in the prospects of future interstellar missions. They seem to exist in abundance, and we may yet find one or more closer to us than the Alpha Centauri stars. And who knows what kinds of companions we may turn up around them?

The paper is Todorov et al., “Discovery of a Planetary-Mass Companion to a Brown Dwarf in Taurus.” In press at Astrophysical Journal Letters (preprint).