Musings on SETI and Nearby Brown Dwarfs

There is enough going on at the Royal Astronomical Society’s 2010 meeting to keep us occupied for some time, but I don’t want to go any farther without circling back to UGPS 0722-05, an unusually cool brown dwarf now thought to be the seventh closest star to the Sun. The parallax measurements of its distance are still being refined, but the dwarf is currently thought to be some 9.6 light years from Earth, roughly twice the distance of Proxima Centauri. With a temperature between 130 and 230 degrees Celsius, this is the coolest brown dwarf ever observed, its mass ranging somewhere between five and thirty times that of Jupiter.

A number of readers sent links to this discovery, for which many thanks, and I note how interest seems to be growing in the idea that a brown dwarf may exist closer to us than the Alpha Centauri stars. Brown dwarfs are now thought to be relatively common in the galaxy, perhaps as common as normal stars, which suggests that missions like WISE may well discover brown dwarfs even closer in the neighborhood. In this case, we can thank the United Kingdom Infrared Telescope on Mauna Kea for the find, with follow-up spectra from the Gemini North Telescope.

For more on this dwarf, the paper is Lucas, et al., “Discovery of a very cool brown dwarf amongst the ten nearest stars to the Solar System,” submitted to Nature and available as a preprint. Science News has a good story on the dwarf, as does New Scientist. I’m bemused by the fact that I baked a loaf of bread last night in a tiled oven that was in the same temperature range as calculated for this object, which is cool enough that it may represent the first of a new class of ultra-low temperature dwarfs. The suspicion grows that objects in this temperature range would be dim enough to have lurked within a few light years and remained unnoticed.

What other surprises are out there? At the RAS meeting in Glasgow, recent talk has focused on discovering things with new instrumentation, in this case the Low Frequency Array that will, when completed, be made up of 44 independent stations spread across the Netherlands, Germany, Sweden, France and the UK. LOFAR will study radio emitting galaxies from the early universe and look into astrophysical phenomena from cosmic rays to pulsars. But it’s intriguing to note that the project also has a SETI component, the first phase of which will be to study how to filter out contamination from Earth-based transmitters and improve the system’s sensitivity.

After that, an extended SETI effort is planned, says Alan Penny, who presented the LOFAR SETI program to an audience in Glasgow:

“LOFAR will scan nearby stars searching for radio emissions which could only be produced by artificial means — a sign that there is a civilization there and that we are not alone. Previous investigations of these stars have concentrated on higher frequencies but, as we do not know at which frequencies an extraterrestrial civilization might choose to emit radio waves, LOFAR will fill an important gap in the search. It is particularly exciting that this is being done by a European team with a pan-European telescope.”

We know comparatively little about the universe at the very low energy wavelengths LOFAR will examine, but that should change quickly as the final stations of LOFAR are completed this summer. Check the sensitivity available in the imagery below: 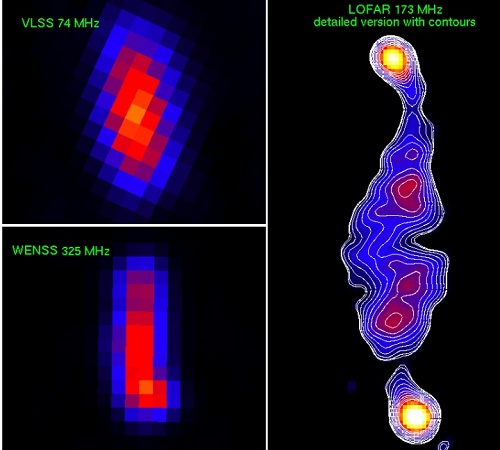 Image: A comparison of the LOFAR image with the results from other radio telescopes at various observing frequencies. The Very Large Array image at 74 MHz and Westerbork Synthesis Radio telescope image at 325 MHz, shown to the same scales, provided the previous state-of-the-art images at low frequencies. The image quality with LOFAR at 173 MHz is well beyond what has been done before in terms of sensitivity and resolution. Credit: van Weeren/ASTRON.

LOFAR functions in a range from 10 to 240 MHz (compare this to the 0.4 to 3 GHz range of typical radio telescopes), and offers baselines across Europe on the order of 1500 kilometers, with the bulk of the aperture array stations being located in the Netherlands. The frequencies involved are so choked with terrestrial traffic that separating signal from local noise has to be the top priority, as anyone who has worked the SWL or ham bands above 10 MHz can testify. But opening up a new frequency range invariably promises surprises down the road. Whether those surprises are all astrophysical or might involve SETI should soon become apparent.