Life Throughout the Solar System?

Just as SETI is redefining its parameters, astrobiology has been going through a shift that widens our notion of habitable zones. Not so long ago, the concept seemed simple. Take a Sun-like star and figure out at what distance a planet could maintain liquid water on its surface. Assume, in other words, that the life you’re looking for is more or less like what’s found on Earth, and therefore needs the same conditions to persist. Now we’re finding remote venues like Enceladus that remind us liquid water can turn up in unusual places, and we’ve parachuted a probe onto a world, Titan, where it’s not inconceivable that exotic forms of life can develop.

Throw in the possibility that objects as distant as the Kuiper Belt may contain subsurface liquids and what used to be a constrained habitable zone seems to be vast indeed. And perhaps we’ve already found another living planet, as astrobiologist Dirk Schulze-Makuch tells Lee Billings in a recent interview. Along with David Darling, Schulze-Makuch is the author of the new book We Are Not Alone (Oneworld Publications, 2010), which fires an unexpected shot across the bow with its subtitle: Why We Have Already Found Extraterrestrial Life. 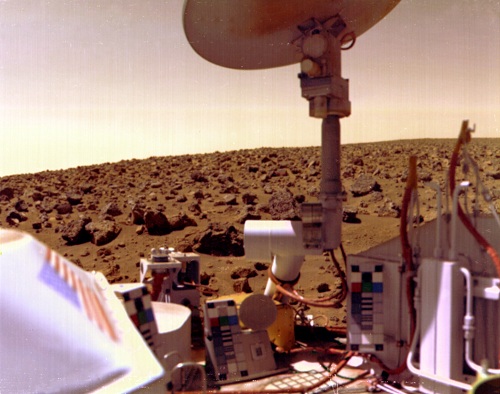 The location of this ‘find,’ of course, is Mars, where the authors argue that the Viking landers probably did discover life there in the 1970s, despite all the subsequent analysis that seemed to rule it out. As Schulze-Makuch tells Billings:

In some ways the timing was bad for Viking. A lot of progress was made after its life-detection experiments were already on or on their way to Mars: The discovery of all the ecosystems at undersea hydrothermal vents, and the extremophile research of the early 1980s really changed how we think about life and its limitations. The Viking researchers thought life on Mars would be heterotrophic, feeding off abundant organic compounds distributed everywhere all over the Martian surface. That picture was wrong, and studies of extremophiles on Earth have made us think differently about Mars. Some people say Viking tried to do too much, too early, and as a result of its ambiguous results, nothing has happened with Martian life-detection experiments ever since.

Viking’s three life-detection experiments produced results that could not have been more frustrating. The Labeled Release Experiment produced a positive result, the Gas Exchange Experiment a negative one, and the Pyrolytic Release Experiment proved ambiguous. That left it up to Viking’s Gas Chromatograph Mass Spectrometer, says Schulze-Makuch, and its subsequent failure to detect organic matter led scientists to conclude Mars was barren of life.

But the latter result should raise the eyebrows:

…the results of the GC-MS were always somewhat odd. This is because we know from the Martian meteorites that there are organics on Mars. Also, it’s been shown that the same instrument could not detect organics in the Dry Valleys of Antarctica or from hydrothermal soil, places on Earth where we know that a small but significant population of microbes makes a living. So the question is, why did the GC-MS not detect the organics present on Mars? Was the concentration too low? Were they in a form that was not detectable? Or, were they all oxidized to carbon dioxide before they could be measured as organics?

Schulze-Makuch opts for the last option and fits it into a hypothesis he and Joop Houtkooper have developed, that Martian organisms use hydrogen peroxide and water as intracellular fluids. Heat, as produced by the GC-MS experiment, would cause the hydrogen peroxide to become unstable and would have oxidized organic compounds, producing carbon dioxide, which is just what GC-MS detected. Life on a dry desert world might well adapt hydrogen peroxide and water for these purposes, and that would also imply that Viking’s Gas Exchange and Pyrolytic Release experiments used too much water, overwhelming Martian microbes.

Mars, so tantalizingly close to our older notions of a habitable zone, is the place we can explore most readily with our robotic instrumentation, but the real action may be much further out in the Solar System. That’s because the Earth is close enough to both Mars and Venus to have exchanged materials with each in the past, leading to the possibility of contamination. To find an independent start to life, what some are calling a ‘second genesis,’ Titan, Europa, Ganymede and Enceladus may be better venues to explore. Of Titan, Schulze-Makuch says:

Titan is a lower priority than Mars, since it is much, much harder to get there, but for finding life that is almost certainly of independent origin, Titan should be the top priority. If we understand organic chemistry correctly and the reactions behind it, it seems reasonable to think there should be life there. Even if we don’t find life there, we can still see how far organic chemistry can evolve in its prebiotic phase. Titan is a natural laboratory for that.

As our astrobiological ideas have widened, we’ve learned not only that we have numerous worlds to explore for life on nearby planets and moons, but that our own planet may contain forms of life we have barely begun to catalog. What we find will invariably lead to speculation about what direction life may have taken on planets around other stars. The big questions will persist: Is life as tenacious elsewhere as it proves to be on Earth? And even if so, is its origin more constrained than the conditions that allow it to spread? Getting past our experience of life on Earth demands preparing ourselves for unusual answers, and it’s not inconceivable that life may exist from the upper clouds of Venus to the remote edges of the Solar System.