Are there better ways of studying the raw data from SETI? We may know soon, because Jill Tarter has announced that in a few months, the SETI Institute will begin to make this material available via the SETIQuest site. Those conversant with digital signal processing are highly welcome, but so are participants from the general public as the site gears up to offer options for all ages. Tarter speaks of a ‘global army’ of open-source code developers going to work on data collected by the Allen Telescope Array, along with students and citizen scientists anxious to play a role in the quest for extraterrestrial life.

SETI@home has been a wonderful success, but as Tarter notes in this CNN commentary, the software has been limited. You took what was given you and couldn’t affect the search techniques brought to bear on the data. I’m thinking that scattering the data to the winds could lead to some interesting research possibilities. We need the telescope hardware gathered at the Array to produce these data, but the SETI search goes well beyond a collection of dishes. 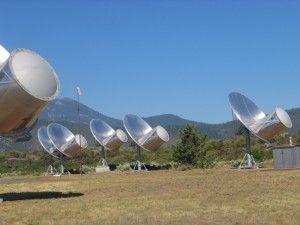 Ponder that the sensitivity of an instrument is only partly dependent on the collecting area. We can gather all the SETI data we want from our expanding resources at the Allen Telescope Array, but the second part of the equation is how we analyze what we gather. Claudio Maccone has for some years now championed the Karhunen-Loève Transform, developed in 1946, as a way of improving the sensitivity to an artificial signal by a factor of up to a thousand. Using the KL Transform could help SETI researchers find signals that are deliberately spread through a wide range of frequencies and undetectable with earlier methods.

Image: Dishes at the ATA. What new methods can we bring to bear on how the data they produce are analyzed? Credit: Dave Deboer.

SETI researchers used a detection algorithm known as the Fourier Transform in early searches, going under the assumption that a candidate extraterrestrial signal would be narrow-band. By 1965, it became clear that the new Fast Fourier Transform could speed up the analysis and FFT became the detection algorithm of choice. It was in 1982 that French astronomer and SETI advocate François Biraud pointed out that here on Earth, we were rapidly moving from narrow-band to wide-band telecommunications. Spread spectrum methods are more efficient because the information, broken into pieces, is carried on numerous low-powered carrier waves which change frequency and are hard to intercept.

What Biraud noticed, and what Maccone has been arguing for years, is that our current SETI methods using FFT cannot detect a spread spectrum signal. Indeed, despite the burden the KLT’s calculations place even on our best computers, Maccone has devised methods to make it work with existing equipment and argues that it should be programmed into the Low Frequency Array and Square Kilometer Array telescopes now under construction. The KLT, in other words, can dig out weak signals buried in noise that have hitherto been undetectable.

But wait, wouldn’t a signal directed at our planet most likely be narrow in bandwidth? Presumably so, but extraneous signals picked up by chance might not be. It makes sense to widen the radio search to include methods that could detect both kinds of signal, to make the search as broad as possible.

I bring all this up because it points to the need for an open-minded approach to how we process the abundant data that the Allen Telescope Array will be presenting to the world. By making these data available over the Web, the SETI Institute gives the field an enormous boost. We’re certainly not all digital signal analysts, but the more eyes we put on the raw data, the better our chance for developing new strategies. As Tarter notes:

This summer, when we openly publish our software detection code, you can take what you find useful for your own work, and then help us make it better for our SETI search. As I wished, I’d like to get all Earthlings spending a bit of their day looking at data from the Allen Telescope Array to see if they can find patterns that all of the signal detection algorithms may still be missing, and while they are doing that, get them thinking about their place in the cosmos.

And let me just throw in a mind-bending coda to the above story. KLT techniques have already proven useful for spacecraft communications (the Galileo mission employed KLT), but Maccone has shown how they can be used to extract a meaningful signal from a source moving at a substantial percentage of the speed of light. Can we communicate with relativistic spacecraft of the future when we send them on missions to the stars? The answer is in the math, and Maccone explains how it works in Deep Space Flight and Communications (Springer/Praxis, 2009), along with his discussion of using the Sun as a gravitational lens.