We’d better get familiar with WHIM, the Warm-Hot Intergalactic Medium. According to some cosmologists, this sparse gas exists in the spaces between the galaxies, accounting for up to fifty percent of the normal matter found in today’s universe. That would explain a conundrum. By ‘normal matter,’ I mean baryons, the protons and electrons of the matter we deal with every day. It turns out that we can study distant gas clouds and galaxies well enough to form an estimate of the normal matter found in the early universe, and the problem is that the nearby universe, much older, shows only about half the amount of normal matter that we would expect to find.

Now researchers have used the Chandra X-ray Observatory and ESA’s XMM-Newton to detect a huge reservoir of interstellar gas apparently embedded in a large-scale structure known as the Sculptor Wall, some 400 million light years from Earth, providing strong support for the WHIM theory. We’re probably looking at material left over from the formation of galaxies, but studying it has been anything but easy, says Taotao Fang (UC-Irvine):

“Evidence for the WHIM is really difficult to find because this stuff is so diffuse and easy to see right through. This differs from many areas of astronomy where we struggle to see through obscuring material.”

The illustration below is an artist’s impression of the Sculptor Wall, which stretches tens of millions of light years and contains not only thousands of galaxies but also a large reservoir of WHIM, according to theoretical simulations. To study it, the researchers looked at an active galactic nucleus (AGN) at X-ray wavelengths that lies on a line of sight to the Sculptor Wall but is two billion light-years away, behind it from our vantage point. The black hole is generating massive amounts of X-rays, allowing their absorption by the WHIM to be studied as they make their way to Earth. 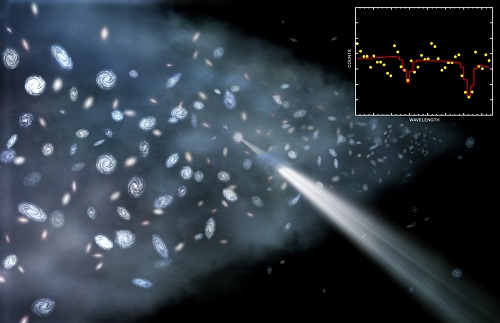 Image: This artist’s illustration shows a close-up view of the Sculptor Wall, which is comprised of galaxies along with the warm-hot intergalactic medium (WHIM). Scientists used Chandra and XMM-Newton to detect the WHIM in this structure by examining the X-ray light from a distant quasar, which is represented in the spectrum (inset). This discovery is the strongest evidence yet that the “missing matter” in the nearby Universe is located in an enormous web of hot, diffuse gas. Credit: NASA/CXC/M.Weiss; Spectrum: NASA/CXC/Univ. of California Irvine/T. Fang et al.

What turns up in the data is the absorption of X-rays by oxygen atoms in the WHIM, consistent with the distance of the Sculptor Wall and also consistent with predictions of the temperature and density of the WHIM. The implication is that the WHIM will also be found in other large-scale structures, with confidence in the theory growing because these observations, as opposed to earlier claimed detections, were made with two different X-ray telescopes. With the distance of the Sculptor Wall known, the statistical significance of the absorption detection is much higher than in earlier blind searches that observed AGN in random directions.

It’s important to stress that the ‘missing matter’ is not ‘dark matter,’ which is under such intense investigation because of its role in the dynamics of galaxies and galactic clusters. The current studies tell us nothing new about dark matter but do help us track down normal matter that is found in the WHIM at extremely low density, equivalent to about six protons per cubic meter, significantly less dense than the interstellar medium between stars in our galaxy. The interstellar medium contains about a million hydrogen atoms per cubic meter.

Indeed, says Fang, “Evidence for the WHIM has even been much harder to find than evidence for dark matter, which is invisible and can only be detected indirectly.” The paper is Fang et al., “Confirmation of X-Ray Absorption by Warm-Hot Intergalactic Medium in the Sculptor Wall,” Astrophysical Journal Vol. 714, Number 2 (10 May 2010), pp. 1715-1724 (abstract / preprint).