Life’s Adaptations Among the Stars

Gliese 581 d seems to be emerging as the exoplanet to talk about in terms of possible life, at least for now. You’ll recall that the initial furor was all about Gl 581 c, but that world now looks to be more Venus-like than anything else, while Gl 581 d may just skirt the outer region of the habitable zone in this interesting system. Thus Dirk Schulze-Makuch’s contention at the recent astrobiology conference in Houston that this ‘super Earth,’ if it holds life, may have creatures on it that have adapted to the gravity of a planet at least seven times as massive as the Earth. 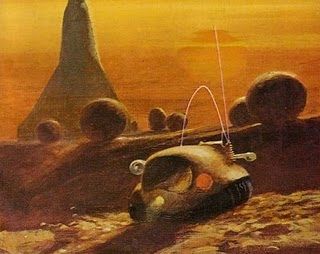 That would probably produce a population that tends to crawl rather than fly, said the Washington State researcher, and we can let our imaginations go to work on the possibilities. As to Gl 581 d itself, its orbit around this red dwarf may place it in the same relative position that Mars is to our Sun, but throw in volcanoes, a magnetic shield and a thick atmosphere with water oceans below and you could have the right astrobiological circumstances. I’m hoping readers will point me to science fictional treatments of higher-gravity settings a bit less extreme than Hal Clement’s Mesklin in the classic Mission of Gravity, where the local life-forms are 50-centimeter long intelligent beings in the shape of centipedes.

Image: Part of a John Schoenherr rendering of Mesklin from Hal Clement’s Mission of Gravity, from the cover of a 1960’s paperback. Could anyone capture the essence of a story better than the remarkable Schoenherr?

Meanwhile, the detection of a true Earth analog is probably not that far away, and when we do find it, what should we expect by way of living beings there? We won’t know for a long time, of course, but it’s worth noting that Simon Conway-Morris has long contended that certain body forms like eyes and wings keep showing up because they are ideal solutions for interacting with an environment like ours. It’s an argument that Charles Lineweaver (Australian National University) doesn’t buy into, as noted in this summary of the Houston conference from Astrobiology Magazine, where Lineweaver is cited on life’s unique evolutionary paths:

This theory of convergence, says Lineweaver, is flawed because it ignores the fact that life on Earth shares certain genes, and those genes are the foundation for what bodily forms can eventually develop. For instance, people often point to dolphin brain size as an instance of convergence with humans. Lineweaver says such a claim is ridiculous because it ignores the fact that 60 million years ago, humans and dolphins diverged from a common ancestor.

And will the life we eventually find be intelligent? Again, it will be a long time before we know, but I liked this ‘tweet’ from the same conference: “The word ‘intelligence’ is now so loaded it’s almost not useful. Better to say ‘species signaling apparatus.’ -C. Lineweaver”. Twitter skeptics should bear in mind how much a tiny message like that — sent by an attendee at a Lineweaver session at the conference — can turn a day’s writing in new directions.

You’ll find pocket summaries of some of the conference’s most interesting sessions in the Astrobiology Magazine feature, along with the predictions of Chris Impey (University of Arizona), who points to the future participation (if not driving influence) of private companies in the exploration of the outer Solar System. I’m not sure whether it was Impey or author Leslie Mullen who threw in the parting exhortation: ‘By 2060 – Voyage to Alpha Centauri!’ but I’m all for the idea, even if the realist in me thinks that voyage is about 250 years off. The beauty of the future, of course, is that our predictions are so often wrong, as I hope mine is.

Next post: Call for Papers: Searching for Life Signatures