What a glorious image WISE has given us. The Wide-field Infrared Survey Explorer has finished three-quarters of its infrared map of the entire sky, with the final images scheduled for July, after which time the spacecraft will spend three months on a second survey before its solid-hydrogen coolant (needed to keep its infrared detectors chilled) runs out. The public WISE catalog will be released a little over a year from now, but we can already marvel at spectacles like the Heart and Soul nebulae, seen below. Be sure to click on the image, presented at the American Astronomical Society meeting in Miami, to enlarge it and spend some time among the newly forming stars. 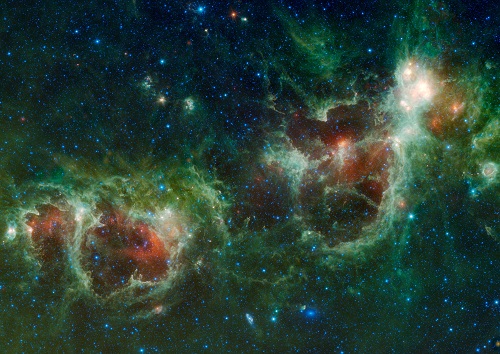 Image: Located about 6,000 light-years from Earth, the Heart and Soul nebulae form a vast star-forming complex that makes up part of the Perseus spiral arm of our Milky Way galaxy. The nebula to the right is the Heart, designated IC 1805 and named after its resemblance to a human heart. To the left is the Soul nebula, also known as the Embryo nebula, IC 1848 or W5. The Perseus arm lies further from the center of the Milky Way than the arm that contains our sun. The Heart and Soul nebulae stretch out nearly 580 light-years across, covering a small portion of the diameter of the Milky Way, which is roughly 100,000 light-years across. Credit: NASA/JPL-Caltech/UCLA.

The beauty of WISE for this kind of study is that it’s working in the infrared, and thus able to penetrate into cool, dusty crevices in the dust surrounding these star factories. It’s important, then, to keep in mind that we’re not in visible light here. In this image, green and red (mostly light from warm dust) represents light at 12 and 22 microns, while blue and cyan show infrared at wavelengths of 3.4 and 4.6 microns (dominated by light from stars). With that caveat in mind, we can marvel anew at the prodigious spectacle that accompanies stars being born.

No word yet on the brown dwarf possibilities in nearby space, of particular interest to Centauri Dreams readers, but we’re getting no shortage of images, with some 960,000 having been beamed down to date. And let’s not forget WISE’s utility in spotting asteroids. The spacecraft has tagged 60,000 of them thus far, of which about 11,000 are newly discovered, and 50 of these are near-Earth objects, of obvious significance as we continue to identify potential impact threats. The NEOWISE program studies and catalogs the asteroids WISE is finding.

“Our data pipeline is bursting with asteroids,” said WISE Principal Investigator Ned Wright of UCLA. “We are discovering about a hundred a day, mostly in the Main Belt.”

Once identified, new asteroids are reported to the IAU’s Minor Planet Center in Cambridge MA, and a network of ground-based telescopes follows up and confirms the finds. Although it hasn’t yet found an asteroid that would be too dark for visible-light detection from the ground, WISE’s infrared capabilities give it more accurate measurements of an asteroid’s size. Researchers expect that by mission’s end, WISE will have found between 100 and 200 new near-Earth objects and will offer size and composition profiles for all.

Two aspects of the WISE mission particularly pique our interest at Centauri Dreams. Tracking down thus far unidentified brown dwarfs near the Sun is obviously consequential — a brown dwarf at 3 light years would make a tempting target for study and, one day, an interstellar probe, being closer to us than the Alpha Centauri trio. But WISE also investigates the Trojan asteroids, which track Jupiter’s orbit around the Sun in two groups, one in front of and one behind the giant planet. 800 Trojans have been observed thus far, and their study may offer insights into the formation of gas giants both in our system and in others.

In terms of protecting our planet, WISE is also a comet hunter, having seen more than 72 so far, a dozen of them new. This animation gives you a sense of WISE’s operation, showing as it does the objects that come near the Earth, along with the comets found thus far. Measuring cometary orbits helps us understand what triggers their movement from long-period orbits (or short-period orbits within the system) and pulls them in toward the Sun. The search for a large, hidden perturber, possibly a gas giant, in the Oort Cloud will benefit from this information, but even in its absence, we need to learn more about how comets move in order to understand how they shaped our Solar System and played a role in bringing volatiles to the Earth.