The Milky Way from Outside

We sometimes forget the conditions under which great images get made. A few years back, in one of the earliest posts on his systemic site, Greg Laughlin (UC-Santa Cruz) showed the image you see below, a famous shot made by the Hubble telescope of the ‘Sombrero Galaxy,’ M104. It’s obvious why this image is a classic. As Greg notes, “The glow of its halo makes the idea of 100 billion stars seem comprehensible.”

But look at the follow-up picture, which Greg made to demonstrate his point. While the Hubble image is a long CCD time-exposure to light gathered by a 240 cm mirror, your own eyes would deliver something considerably different. From 300,000 light years, M104 is noticeable only as a dim and lurking shape.

You can see the same effect for yourself if you find the Andromeda Galaxy, subtening an angle larger than the full Moon in our skies but as evanescent as smoke when viewed by the naked eye. The dim, fuzzy object is out there if you know where to look, but it’s not exactly impressive without a telescope.

I used to imagine settings beyond the galaxy, where the great pinwheel of the Milky Way would dominate the sky, but you’d have to be a lot closer than Andromeda’s two million light years to get a true spectacle. Suppose, though, there were a way to leave the galaxy, something like what Ray Villard talks about in a recent article. We know that every 100,000 years or so the supermassive black hole at the galactic center ejects a star at speeds high enough to leave the galaxy. These ‘hyper-velocity’ stars are an interesting study in their own right, having velocities of over 1000 kilometers per second, compared to the more sedate 100 kilometers per second of the average star. What exactly causes a hyper-velocity star to move like this?

I checked in with the Hyper-Velocity Star Project to learn the following:

These stars are so fast that the gravitational pull of our galaxy is overcome. They reach the escape velocity and hurtle out of the galaxy. There are a few theories about what makes them achieve this velocity. They could be the result of a supernova as is believed to be the case of HVS #3 [see this article] that came from the Large Magellanic Cloud. They could be the result of a binary star system passing too close to the gravitational well of the super massive black hole at the center of our galaxy. One of the stars of the system gets caught by the huge gravity well and the other one is thrown free at very high speed achieving escape velocity.

We know of sixteen confirmed hyper-velocity stars, and the thinking is that there are about 1000 associated with the galaxy. The Hyper-Velocity Star Project is searching for more.

Into the Deepest Night

What captured Ray Villard’s attention was the idea that a Sun-like star in a binary system might be ejected, carrying its planetary system along with it. What would the civilization that arose on the surface of such a planet think about the night sky? As Ray notes, their sky would be largely black, for the receding planetary system would be near few stars as it moved beyond the halo. Ray talks about the center of the Milky Way looking like a ‘fuzzy headlamp,’ with the spiral arms, though covering a large part of sky, emerging ghostly and faint from the nucleus.

Alien sky lore would have no constellations in the absence of stars. All mythology would be built around the nighttime wispy pinwheel with its cycloptic “glowing eye.” Alien sky watchers would duly note the appearance of brilliant star-like novae and supernovae in the spiral disk. These might as first be construed as omens or messages from the gods, or fuel other superstitions. But fireworks in the galactic disk would be dutifully recorded.

As to technology, we can only speculate, but imagine what happens after this civilization develops telescopes and spectroscopy:

The development of telescopic astronomy would allow star clusters and nebulae to be resolved. It would be as big a revelation as when Galileo first observed the Milky Way in 1609. Bright blue stars would be seen sprinkled across in the Milky Way’s spiral arms. Spectroscopy would show that the pinpoints are made of the same stuff the alien’s parent star is. But it would take a great leap of imagination to connect the tiny pinpoints to the brilliant glowing orb of their star.

Emerging Science in the Void 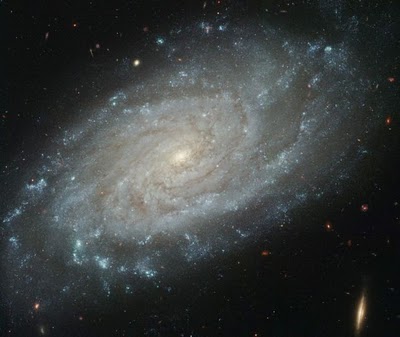 Over the eons, our runaway civilization, bound ever outward, might notice that the galaxy that filled its skies was dimming, but would it ever be able to relate its single star to the billions on display through its newly developed instruments? Ray imagines such a society remaining pre-Copernican, but I’m not so sure. In any case, scientists that did figure out their place in the cosmos might wonder what living beings inside a galaxy would imagine, and how they would ever sort out the shape of the star swarm within which they found themselves.

Science finds its ways and I suspect our lonely intergalactic friends would eventually relate distant galaxies to the one nearest them, always wondering how they happened to be cast adrift and learning to question whether the great sky pinwheel was once home to their star. But ponder the idea of interstellar flight in this setting. Would it even be imagined? If the distance to Alpha Centauri seems almost inconceivably far to us, how much more so would the outcasts find the hundreds of thousands of light years back to the stellar city?