These days we think of Giovanni Cassini in relation to Saturn, for obvious reasons, but the Italian astronomer (1625-1712) did a lot more than discovering the division in the rings of Saturn that would later bear his name. In addition to his studies of the Saturnian moons, Cassini shares credit for the discovery of Jupiter’s Great Red Spot, and in conjunction with Jean Richer, made parallax observations of Mars that allowed its distance to be determined in 1672.

But back to Jupiter, for in 1686 Cassini reported seeing a dark spot on the planet, one that from his description was roughly the size of the largest impact made by the Comet P/Shoemaker-Levy comet fragments in 1994. We’re dealing with crude telescopes and lack of corroborating information with Cassini’s observation, but Shoemaker-Levy left us with Hubble imagery when it struck the giant planet after breaking apart into more than twenty pieces enroute.

I mention Cassini’s early sighting because it’s possible he was also seeing the results of an impact, and that would be significant. Given what we know about asteroid and cometary impacts, the assumption has been that impacts with Jupiter should occur on a timescale of every few hundred to few thousand years. But they’re starting to mount up. Add to Cassini’s possible impact sighting an 1834 observation by the British astronomer George Airy, who reported a dark feature that was four times as large as the shadows cast by the Galilean moons.

And now, just sixteen years after Shoemaker-Levy, we have two more impacts, the first evidently the result of an asteroid rather than a comet. The differences between it and Shoemaker-Levy are instructive. The impact occurred on July 19, 2009, was spotted by Australian amateur Anthony Wesley and quickly followed up by observatories around the world and via the Hubble telescope. The impact site was elongated, indicating an object that descended at a shallower angle than the Shoemaker-Levy fragments, and a different direction of origin. 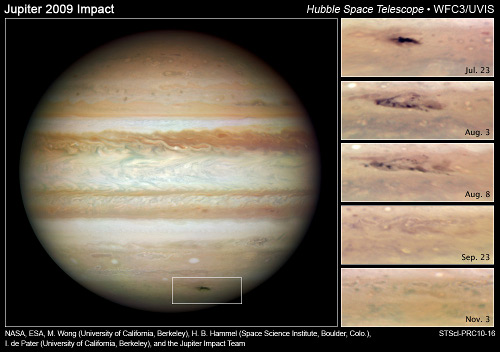 Also telling is that while the 1994 impact showed a distinct halo around the site, evidently the result of fine dust rising from the cometary material, the 2009 impact showed no halo and left little contrast between the debris and Jupiter’s clouds. Scientists are interpreting this as evidence of a lack of lightweight particles, pointing to a solid impactor like an asteroid rather than a comet.

Wesley and fellow amateur Christopher Go, based in the Philippines, also lay claim to a June 3 impact this year, an event first noted by Wesley and confirmed by Go. Both caught the impact on video. This Ars Technica story has more, and a detailed breakdown of the events is offered in Emily Lakdawalla’s account for the Planetary Society. Follow-up observations may yield more information, but for now this video, with its one-second flash, makes it clear that Jupiter has pulled in another victim.

We can’t with certainty ascribe the 1686 and 1834 observations to impacts, but the fact that we now have three Jupiter strikes within fifteen years does raise the eyebrows. The 2009 impactor is thought to have been about 500 meters wide, probably having its origin in the Hilda family of asteroids that orbit near Jupiter. It’s chastening to hear that its strike created an event that was the equivalent of several thousand nuclear bombs exploding. Not as big as the largest Shoemaker-Levy impacts, but that fact in itself tells us that while Jupiter may do a good job cleaning out our system’s inner debris, one stray asteroid could do unthinkable damage on our planet’s surface.