Update: The IKAROS blog reports “The operation ended today as planned.” That must count as good news for the sail, now 7,480,787 kilometers from Earth, but we still need confirmation that the sail’s ‘secondary’ deployment is now complete. Maybe this is it: Japanese space journalist Mitsunari Kita, who is attending a press conference re the Hayabusa mission, has sent out a tweet (@kitamitsunari) congratulating the IKAROS team on full deployment of the sail (1805 UTC).

What extraordinary times these are for the Japan Aerospace Exploration Agency (JAXA). We are in the midst of an interplanetary solar sail mission even as the Hayabusa asteroid explorer prepares for re-entry over Australia, an event that should occur around 1400 UTC on June 13. The Hayabusa craft will release its 16-inch-wide entry capsule some three hours before landing. We’ve concentrated on IKAROS in these pages, but what a story Hayabusa has been, launched in 2003 to explore the asteroid Itokawa, which it did, but not without a series of technical problems affecting communications and producing a fuel leak that drained its chemical propellant. Engineers brought the crippled craft home using low-thrust ion engines in a masterful series of deep space fixes.

Hayabusa may have failed in its attempt to gather rocks and soil on Itokawa, but it’s hoped that at least some residual matter from the asteroid may be aboard the return capsule. We’ll soon know. In the meantime, the IKAROS sail team has been busy with the sail’s deployment, pausing it briefly because of unexpected spin, and resuming it yesterday. The IKAROS blog announced seven hours ago (0502 UTC) that the primary sail deployment — this refers to extension of the booms to full length — had been completed successfully and that secondary sail deployment will take place about now, which means early afternoon UTC as I write and in the late evening Japan Standard Time. 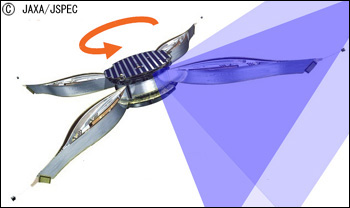 It’s in the secondary stage of deployment that the sail itself emerges, a critical time for the mission. IKAROS carries onboard cameras so we have several views like the one below showing what the blog calls ‘primary expansion driven by the relative rotation mechanism.’ The diagram above gives an idea of what we are looking at as the booms are extended. 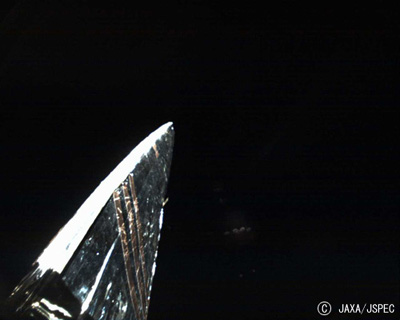 The final image, released about five hours ago, shows the sail after primary extension of the booms and appears to show sail material in strong sunlight, along with associated tethers and harnesses. We should get more imagery soon as the process continues. Which basically means, I think, that despite the appearance of a tangled tether, the sail was in good shape at this point in the deployment.