β Pictoris b: A New Planet and Its Implications

One of the problems with determining how planets form is the nature of the dusty gas-rich disks that surround their stars. We’re learning as we study these things that the disks around young stars disperse quickly in astronomical terms, within several million years. Thus finding a massive planet around a young star like Beta Pictoris is noteworthy. It demonstrates that such planets can form in short-order. What’s doubly fascinating about the new find is that this planet was discovered by direct imaging techniques, and that it is as close to its star as Saturn is to ours.

Have a look at the imagery below, made using the European Southern Observatory’s Very Large Telescope and an adaptive optics instrument that removes atmospheric blurring and other effects. It’s a composite showing the faint source in the 2003 image and contrasting it with the motion of the object as seen in the autumn of 2009. The object can be seen to have moved to the other side of the disk. As we only have direct images for a small number of exoplanets, Beta Pictoris b enters into select company, while the small size of its orbit (8-15 astronomical units) will offer the chance to record a full orbit within 15 to 20 years. 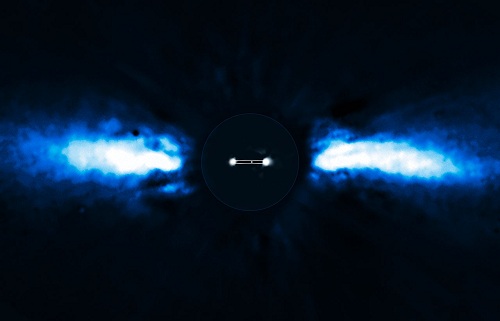 Image: The above composite shows the reflected light on the dust disc in the outer part, as observed in 1996 with the ADONIS instrument on ESO’s 3.6-metre telescope. In the central part, the observations of the planet obtained in 2003 and autumn 2009 with NACO are shown. The possible orbit of the planet is also indicated, albeit with the inclination angle exaggerated. Credit: ESO/A.-M. Lagrange.

Beta Pictoris is about twelve million years old, 75 percent more massive than our Sun. Located some 60 light years away in the direction of the constellation Pictor (the Painter), it has long been known to be surrounded by a circumstellar dust disk extending several hundred AU from the star. 25 years of observations at wavelengths from optical to thermal infrared have shown the presence of multiple disk structures and tantalizing asymmetries — in particular, a warp in the disk plane — that suggested the presence of massive planets. The new work confirms the idea, and also offers interesting evidence for planet formation models. From the paper (internal references removed for brevity):

A comparison of the luminosity of β Pictoris [8.7 LSun] to that of the Sun suggests that the orbit of β Pictoris b lies at or slightly beyond the disk radius outside which water is stable as ice (snow-line). The snowline is thought to separate disk regions where rocky or gaseous/icy planets form… Indeed, beyond the snowline, the disk surface density is expected to be higher (factor of 3) than that inside the line; this allows giant planet cores (10 MEarth) to form before the dispersion of the gaseous nebulae. Core accretion models suggest indeed that this latter step – the onset of rapid gas accretion before the loss of circumstellar gas – is the critical step in forming giant planets.

The core accretion model holds that dust particles gradually accumulate to become the rocky bodies we call planetesimals. The planetesimals themselves eventually collide to create a massive core that then attracts an outer layer of gas. Usefully, Beta Pictoris b seems to confirm core accretion to a high level of detail. The paper goes on:

For a 2 MSun star, the snowline location varies between 2.5 and 4 AU for ages between 1 and 10 Myr, respectively. In the case of the 1.75 MSun β Pictoris, core-accretion based models predict a rapid formation of giant protoplanet cores between ~ 6 and 18 AU. The observed orbital radius of β Pictoris b is consistent with this range, demonstrating that the planet could have formed via core accretion on the same orbit where it is observed today. This possibility is in contrast to the case of the more distant planets Fomalhaut b, HR8799bc, AB Pic b, and 2MASS 1207b, which are too massive… to have formed at their present separations (40 AU or larger), via core accretion.

In addition to showing how quickly planets can form within circumstellar disks, this work is also valuable because it shows that planets deeply embedded in these disks can be teased out by close examination of the disk structure. The short orbital period of Beta Pictoris b should make it the object of intense study as we learn more about how such worlds distort their surrounding disks. The paper is Lagrange et al., “A Giant Planet Imaged in the Disk of the Young Star β Pictoris,” Science, published online June 10, 2010 (abstract).