Oort Finding: Many Comets From Other Stars

Here’s something to put the cap on a scintillating week in space science. It’s from Hal Levison (SwRI), who has led an international team in computer simulations focusing on our Sun’s earliest days. It turns out that our older assumption that the Oort cloud of comets surrounding the Sun came from the Sun’s protoplanetary disk may not be accurate. Yes, our system produced comets, but not enough to account for the Oort’s entire population, which swarms in a vast sphere that extends half the distance to Alpha Centauri. Says Levison:

“If we assume that the Sun’s observed proto-planetary disk can be used to estimate the indigenous population of the Oort cloud, we can conclude that more than 90 percent of the observed Oort cloud comets have an extra-solar origin.” 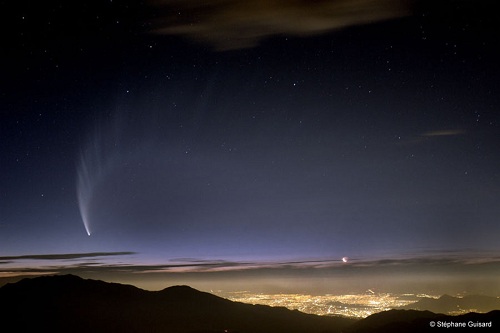 Image: Comet McNaught, possibly an interloper from another star, according to recent work. Credit: Stéphane Guisard.

The process works like this: We believe the Sun formed in a cluster containing hundreds of closely packed stars. Each of these stars would have formed its own population of comets out of its circumstellar disk, and most of these comets, including those in our own infant system, would have been ejected by the gravitational effects of newly forming gas giants. Moving out into the cluster, they would have eventually been captured by other stars, just as our Sun would have captured its own share of comets as the cluster dispersed, the hot young stars blowing its gases into the void.

Our star’s early life, then, would have involved substantial sharing with nearby stars, all of which have now moved away. If this is true, then the Oort should house materials from a wide range of the stars the Sun was born with, and many comets, perhaps famous ones like Halley, Hale-Bopp and McNaught, are actually interstellar visitors now in the Sun’s gravitational thrall. Says Ramon Brasser (Observatoire de la Cote d’Azur): “The formation of the Oort cloud has been a mystery for over 60 years and our work likely solves this long-standing problem.”

The paper is Levison et al., “Capture of the Sun’s Oort Cloud from Stars in its Birth Cluster,” published online by Science June 10, 2010 (abstract).