Long-term thinking means planning for the consequences of things that are beyond our current capacity. What happens on the farside of the Moon is a case in point. Getting humans back to the Moon is going to happen sooner or later, and one day we will have bases there, as well as a human or robotic presence at the L4 and L5 Lagrangian points of the Earth-Moon system. That means an ever growing blanket of electromagnetic radiation from our various activities. At the same time, we want to protect the farside, which is ideal for future radio telescope or phased array detectors. What to do? 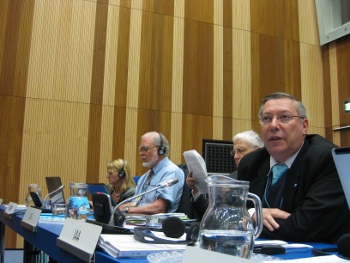 Italian physicist Claudio Maccone has brought this issue to Vienna, speaking before the United Nations Committee on the Peaceful Uses of Outer Space. Maccone is proposing a radio-quiet zone on the farside that will guarantee radio astronomy and SETI a defined area in which human radio interference is impossible. It’s an idea with a pedigree, going back to 1994, when the French radio astronomer Jean Heidmann first proposed a SETI observatory in the farside Saha Crater with a link to the nearside Mare Smythii plain and thence to Earth.

An IAA study committee grew out of this and a series of discussions since, with Heidmann’s death in 2000 being followed by Maccone’s taking over the project. As Maccone told the UN committee meeting, radio interference becomes a serious threat when we consider the uses to which the Lagrangian points could be put. The Earth/Moon system has five such points, as shown in the diagram. Potential space operations could take place at all of these except, let’s hope, L2, which as you can see in the diagram is located so that a base there would flood the farside with interference. The first principle is then clear: Leave the L2 point alone. 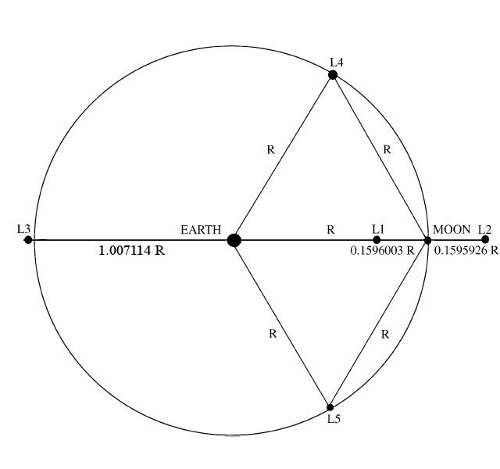 As for the others, the diagram makes it equally clear that inteference from L4 and L5 would reach large parts of the farside, but Maccone’s figures show that a protected area is still possible. He is proposing a Protected Antipode Circle, defined as a circular piece of land 1820 kilometers in diameter, centered around the antipode on the farside and spanning an angle of 30 degrees in longitude, in latitude and in all radial directions from the antipode. The rationale, as presented by Maccone in a 2008 paper: 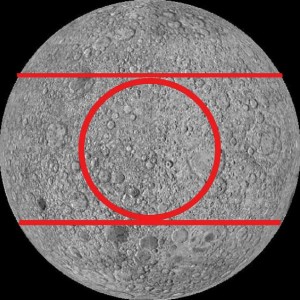 (1) PAC is the only area of the Farside that will never be reached by the radiation emitted by future human space bases located at the L4 and L5 Lagrangian points of the Earth-Moon system (the geometric proof of this fact is trivial);

2) PAC is the most shielded area of the Farside, with an expected attenuation of man-made RFI ranging from 15 to 100 dB or higher;

3) PAC does not overlap with other areas of interest to human activity except for a minor common area with the Aitken Basin, the southern depression supposed to have been created 3.8 billion years ago during the ‘big wham’ between the Earth and the Moon.

Image: PAC, the Protected Antipode Circle, is the circular piece of land (1820 km in diameter along the Moon’s surface) that Maccone proposes to be reserved for scientific purposes only on the farside of the Moon. At the center of the PAC is the antipode of the earth (on the equator and at 180◦ in longitude). Credit: Claudio Maccone.

Where to locate our radio astronomy and SETI facilities within the vast region of the PAC? The problem is that this is a rugged region, but about 5◦ south along the 180◦ meridian (at 179 degrees east longitude, 5.5 degrees south latitude) we find the 80 kilometer Daedalus Crater. Daedalus is the most shielded crater of all from Earth-made radio pollution even as we extend our radio interference into space at the Lagrange points (and again, assuming we declare L2 off-limits). 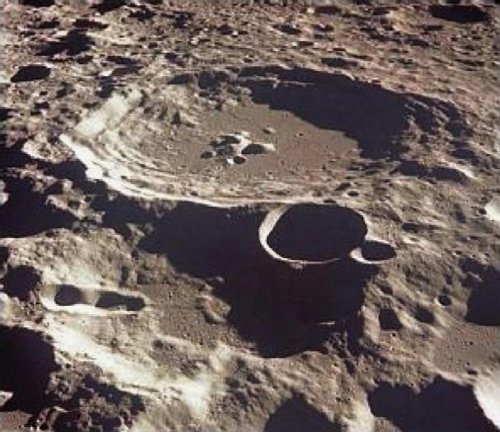 Image: An oblique view of the Crater Daedalus on the Lunar Farside as seen from the Apollo 11 spacecraft in lunar orbit. The view looks southwest. Daedalus (formerly referred to as I.A.U. Crater No. 308) is located at 179◦ east longitude and 5.5◦ south latitude. Daedalus has a diameter of about 50 statute miles (∼ 80 km). Credit: NASA.

What about the L1 and L2 points of the Sun/Earth system? Here we have a problem, because there are already plans for placing satellites there (the original plan for NASA’s Space Inteferometry Mission was to place it at the Sun-Earth L2 point, for example). Maccone’s thoughts on this:

This radio pollution of the Moon Farside by scientific satellites located at the Lagrangian Points L1 and L2 of the Sun-Earth system is, unfortunately, unavoidable. We can only hope that telecom satellites will never be put there. As for the scientific satellites already there or on the way, the radio frequencies they use are well known and usually narrow band. This should help the Fourier transform of the future spectrum analyzers to be located on the Moon Farside to get rid of these transmissions completely.

Maccone’s hope is that the PAC will be approved by the United Nations, in pursuit of which he made his presentation in Vienna. Ultimately, declaring the area comprising the PAC an international land under the protection of the United Nations — or by direct agreement among the governments of the space-faring nations — is the only way we can hope to preserve the central farside from activities that would compromise its unique scientific value.

An urgent matter? You bet. It may seem like a remote future given our current problems, but the time will come when commercial and industrial interests will lead to more and more satellites in orbits much higher than geostationary, with consequent degradation to the farside’s ‘zone of quiet.’ Uncontrolled radio frequency interference is already a serious problem for Earth-based radio astronomy. The farside can be the ideal place for radio astronomy and SETI facilities, but only if we act to protect it.

For more on these issues and the mathematics of working out the best protected area location, see Maccone, “Protected antipode circle on the Farside of the Moon,” Acta Astronautica 63 (2008), pp. 110-118.