The space-based Spitzer telescope has performed a new study of brown dwarfs, concentrating on a region in the constellation Boötes. Fourteen of the objects, with temperatures ranging between 450 and 600 Kelvin, have been found. These are cold objects in stellar terms, and in fact are as cold as some of the planets we’ve found around other stars. 450 Kelvin works out to 177 degrees Celsius, or 350 degrees Fahrenheit, the temperature of a moderately hot oven.

In fact, it gives me pause to reflect that the focaccia I baked the night before last needed higher temperatures (500 degrees Fahrenheit) than the coolest of these brown dwarfs can supply. Most of the new objects in the Spitzer study are T dwarfs, the coolest class of brown dwarfs known, defined as being less than 1500 Kelvin (1226 degrees Celsius). One of the dwarfs in this study is cold enough that it may represent the hypothetical class called Y dwarfs, part of a classification created by a co-author of the paper, Davy Kirkpatrick (Caltech).

“Models indicate there may be an entirely new class of stars out there, the Y dwarfs, that we haven’t found yet. If these elusive objects do exist, WISE will find them.” 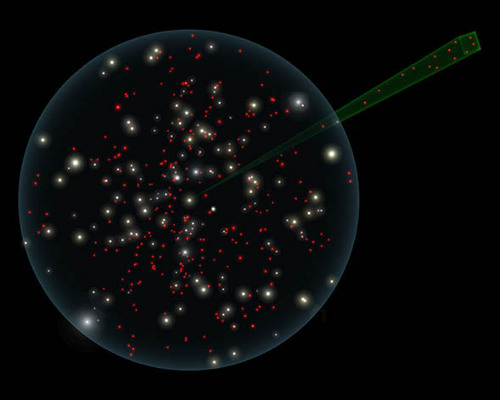 Image: This artist’s conception shows simulated data predicting the hundreds of failed stars, or brown dwarfs, that NASA’s Wide-field Infrared Survey Explorer (WISE) is expected to add to the population of known stars in our solar neighborhood. Our sun and other known stars appear white, yellow or red. Predicted brown dwarfs are deep red. The green pyramid represents the volume surveyed by NASA’s Spitzer Space Telescope — an infrared telescope designed to focus on targeted areas in depth, rather than to scan the whole sky as WISE is doing. The region within 25 light-years from the sun is marked by the blue sphere. Credit: JPL.

Kirkpatrick’s thoughts on WISE are fascinating in their own right (he’s also a member of the WISE science team). It has long been speculated, for example, that a cool object, perhaps a brown dwarf, could be found in nearby space, close enough to cause perturbations to the Oort Cloud. Kirkpatrick notes that his team is now calling this putative object Tyche, the benevolent counterpart to Nemesis, and says that WISE is powerful enough that it will either find Tyche or rule it out. And let me quote WISE project scientist Peter Eisenhardt (JPL) on the mission:

“WISE is looking everywhere, so the coolest brown dwarfs are going to pop up all around us. We might even find a cool brown dwarf that is closer to us than Proxima Centauri, the closest known star… We’ll be studying these new neighbors in minute detail — they may contain the nearest planetary system to our own.”

It’s worth keeping in mind that WISE is studying a volume of space 40 times larger than is covered in the recent Spitzer work. While all fourteen of the objects discovered in this survey are hundreds of light years away (and invisible to visible-light telescopes), their presence implies that there are a hundred or more brown dwarfs within 25 light years of the Sun, and the latter should be close enough to confirm with spectroscopy. The Spitzer team goes so far as to speculate that WISE may find more brown dwarfs within this 25 light year sphere around the Sun than the number of stars known to exist there.