Early Multicellular Life and Its Implications

We often speak in these pages about extinction events, and cite such examples as the Cretaceous-Tertiary event some 65.5 million years ago, when the mass extinction of dinosaurs and numerous animal and plant species occurred. Whether caused by an incoming asteroid or comet or through a series of catastrophes including volcanic eruptions (the Deccan traps), the K-T event is the classic reminder of the perils that confront life. But perhaps the largest extinction event of all was the so-called ‘oxygen catastrophe,’ an environmental change that caused oxygen to become widely available in the atmosphere and shallow ocean water. 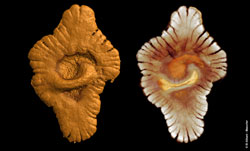 The oxygen catastrophe occurred around 2.4 billion years ago and doomed the bulk of Earth’s anaerobic inhabitants. Astrobiologists are fascinated with how life adapts to changing environments, so we’d like to learn much more about how these events proceeded. Now comes news of fossils in black shale formations in Africa that are apparently 200 million years older than our previous examples of multicellular life. The team studying the fossils, led by Abderrazak El Albani (University of Poitiers), found them in the Francevillian Basin in the west African nation of Gabon, where they located more than 250 specimens, all of them dating to approximately 2.1 billion years ago. The biological origin of these fossils has been confirmed and their complex structures deemed to indicate coordinated growth between cells.

Image: Virtual reconstruction (by microtomography) of the external morphology (left) and internal (right) of a specimen from the site in Gabon. Image copyright CNRS Photo Library/A. El Albani & A. Mazurier.

The work is covered in Nature this week (see below) and written up at TheScientist.com, from which this quote discussing the fossils’ complexity and possible cell to cell signaling:

Specifically, the fossils display scalloped edges with radiating slits, and many have a central structure, not unlike the overall structure of a jellyfish medusa. “This organism, in my opinion, was something very light, very gentle, very soft,” El Albani speculated. Given the ubiquity of the radial structures among the highly diverse specimens, “I am sure that this radial fabric has some functionality for these specimens,” he said, possibly for movement or fixation to the sediment, but “we have a lot of work [to do]” to determine what that function truly was. Still, the complexity and organization of their structure “shows clearly that [these organisms were] multicellular,” he insisted. 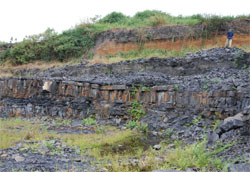 The organisms are thought to have lived in a marine environment of shallow water 20 to 30 meters deep. Paleontologist Philip Donoghue (University of Bristol), who wrote an accompanying analysis of this work in Nature, notes that the fossils appeared within a few million years of the oxygen catastrophe, which he calls the Great Oxidation Event. Studying how organisms like this reacted to increasingly available oxygen is made more difficult because most of the rocks from the period have been destroyed. Donoghue adds the caution that we shouldn’t necessarily view these fossils as the ancestors of all multicellular life. Quoting again from TheScientist.com:

Multicellularity hasn’t evolved just once; it’s evolved almost 20 times even amongst living lineages,” [Donoghue] said. “This is probably one of a great number of extinct lineages that experimented with [increased] organismal complexity.”

From a broader perspective, we keep finding evidence of life’s gritty persistence in the face of seemingly fatal environmental changes, all of which should give us pause in evaluating habitable environments on other worlds. Supposing life got a start, the receding seas of Mars or the ice-bound oceans of Europa may still nurture robust survivors. We’ve learned, too, that as far out as the Kuiper Belt, objects with sub-surface water may be plentiful, and it’s not impossible that there may be some kind of simple life forms all the way from the cloud tops of Venus to the icy realm of Triton and beyond.

The paper is El Albani et al., “Large colonial organisms with coordinated growth in oxygenated environments 2.1 Gyr ago,” Nature 466 (1 July 2010), pp. 100-104 (abstract). Dongohue’s analysis of the work is Donoghue and Antcliffe, “Early Life: Origins of Multicellularity,” Nature 466 (1 July 2010), published online (thanks to Centauri Dreams readers Adam Crowl and Zen Blade for the pointer). A news release from the University of Poitiers is available.