Getting a handle on dark energy is one of the great goals of modern physics. But understanding what it is that seems to be accelerating the expansion of the universe depends upon the accuracy of our measurements. We can study this acceleration by looking at the behavior of Type Ia supernovae, which can be used as ‘standard candles’ — the distance to a galaxy can be measured because the visual magnitude of this type of supernova depends on its distance. But how reliable are our standard candles? New work confirms the usefulness of these stellar events while explaining why some supernovae can look different from others. 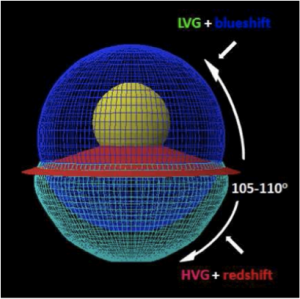 A Type Ia supernova occurs when a white dwarf gathers material from a nearby companion star and approaches the Chandrasekhar limit (about 1.38 solar masses), at which point the pressure and density have grown beyond the point that the star can support its own weight. Various processes have been invoked to explain the details, but while these supernovae seem alike, some recent studies have shown that the speed with which their spectral features evolve can vary. This change in the so-called ‘velocity gradient’ was noticed around the same time that Type Ia supernovae were first being used to flag the existence of dark energy.

Image: A schematic picture of structure of type Ia supernovae derived by the observations. The ash of the initial sparks is at an offset (yellow). Depending on the viewing direction from which a supernova is observed, a supernova manifests different spectral properties: If viewed from the offset direction, it appears as a “Low-Velocity-Gradient” SN and shows blueshift in late-times. From the opposite direction, a SN is a “High-Velocity-Gradient” SN and shows redshift (as is shown in the observational data in Fig. 1). Here, low- and high-velocity-gradients SNe are those showing a slow and rapid evolution in spectral features, respectively. Credit: IPMU/University of Tokyo.

By relating the velocity gradient to the wavelength shift of emission lines in spectra taken some 200 days after a supernova explosion, Keiichi Maeda (University of Tokyo) and team have found that the degree of the gradient depends on the direction from which the supernova is observed. These supernovae explode asymmetrically, the team argues, and because the events are observed from random directions, the differences will average out. Says Maeda:

“This is a single stone to kill at least three birds. It is not only about uncovering the origin of the spectral diversity. The finding now gets rid of a concern about using Type Ia supernovae for cosmology, since this viewing angle effect will average out if we collect many supernovae for cosmology. In addition, the idea of the uniform progenitor system is rescued. Finally, this is the first strong observational indication about how the thermonuclear flames are ignited in the explosion — the finding points to asymmetric, off-center explosions, as opposed to what most people had believed so far.”

Thus the critical supernovae are still standard candles despite variations in their spectral features, confirming the validity of the measurements of dark energy produced by the High-z Supernova Search Team and subsequent researchers. We still have a robust mystery on our hands: What is it that seems to be acting against the gravitational force to accelerate an already expanding universe? We’re not through with Type Ia supernovae yet — we still have several supernovae whose stars seem to have expanded beyond the Chandrasekhar limit before the explosion occurred — but learning that the great bulk of these events are still reliable indicators is strong support for the dark energy they have uncovered.

The paper is Maeda et all, “An asymmetric explosion as the origin of spectral evolution diversity in type Ia supernovae,” Nature 466 (1 July 2010), pp. 82-85 (abstract). Also available: Kasen, “Astrophysics: The supernova has two faces,” in the same issue, pp. 37-38.