Asteroids are much in the news these days, with Japanese and European missions returning outstanding photos and information about them. While we await testing on what may be fragments of the asteroid Itokawa from the Hayabusa team, we now prepare for another asteroid flyby on the part of the European Space Agency’s Rosetta spacecraft, which carries DLR’s Philae lander, a craft destined for eventual touchdown on the comet 67P/Churyumov-Gerasimenko. 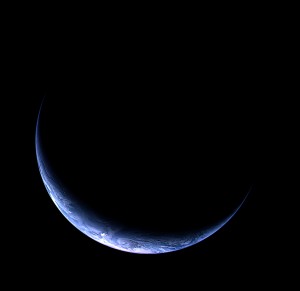 But that’s not until 2014, when the most detailed study of a comet ever attempted reaches its destination. Along the way, Rosetta has delivered interesting asteroid results, including a 2008 flyby of the ‘diamond in the sky’ asteroid called Steins. We can now look forward to a flyby of the main belt asteroid 21 Lutetia, which will occur on July 10. Three instruments on the lander — a magnetometer and plasma monitor (ROMAP), and two gas analyzers — will be switched on during the flyby. More in this DLR news release, which notes that scientists will be looking for signs of a possible exosphere, examining the thermal history of the object and checking for the presence of magnetic minerals.

Image: The Earth as seen by Rosetta’s OSIRIS narrow-angle camera from a distance of 633,000 kilometers on 12 November 2009. This was during Rosetta’s last Earth swingby, one of four gravity assist maneuvers performed by the spacecraft. Credit: ESA/MPS.

Rosetta will hustle past Lutetia at 15 kilometers per second, a tricky enough problem in data acquisition even if it weren’t being performed 25 light minutes away, resulting in commands taking almost an hour after being sent before their receipt can be confirmed. This classic problem in deep space communications is handled by storing the needed commands aboard the spacecraft well before the flyby, for automatic execution at the appropriate time. Both the Rosetta site and DLR should offer updates as the encounter approaches. 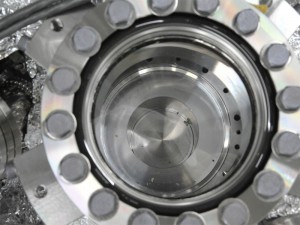 We wait with great interest, meanwhile, for further news about Hayabusa as the Japan Aerospace Exploration Agency (JAXA) works with the return capsule’s sample container. The tiny particles that show up in this image may well be from the near-Earth asteroid Itokawa, captured aboard the craft even though the crucial mechanism designed to collect asteroid fragments failed. The idea is that dust from Hayabusa’s landing may still have found its way into the probe.

Image: Particles found in Hayabusa’s sample canister may be from the asteroid Itokawa. Credit: JAXA.

With all this good science in progress, it’s important to note as well that the committee drawing up plans for NASA’s mission goals and priorities for 2013 to 2022 will meet again on July 13, a Washington DC gathering that will examine, among other things, the biggest ticket items being considered, a three-part Mars sample return effort and a mission to Europa, both conceived as joint efforts with the European Space Agency. These and 24 other missions are now receiving their cost estimates for ranking by the committee.

Keep your eye on this process, for with funding as constrained as it is, attempting Mars and Europa at the same time could be a problem for smaller missions destined for other targets. This is from an article by Eric Hand on the proceedings that ran this week in Nature:

…attempting a Europa mission and the Mars sample return at the same time could crowd out smaller missions to other parts of the Solar System, says Alfred McEwen, principal investigator for the HiRISE camera on the Mars Reconnaissance Orbiter, which is currently imaging Mars. “If both go forward, can NASA — and ESA for that matter — do much of anything else?” he asks.

Or will cost and complexity bias the committee toward smaller missions?

What [Steve] Squyres has called “sticker shock” for the biggest missions could bias the survey in favour of small- and medium-cost mission lines known as Discovery and New Frontiers. “I could put together a spectacular programme without either one of those [flagship missions]. There are many ways to slice this,” says Squyres. Or, as [Fran] Bagenal puts it: “They could say, ‘A pox on both your houses. Let’s just continue with New Frontiers and Discovery until you come up with an easier, cheaper way to do these missions.'”

The committee will draft its recommendations in late September, intending to publish its report by April. This is a treacherous time for mission science — only so many projects can be chosen — but as Rosetta closes on Lutetia enroute to a comet, and as we wait for news from JAXA’s doughty Hayabusa team, we should remember the value of smaller-ticket missions that often don’t get the press of the biggest projects. In choosing our targets, keeping a focus on asteroids is a prudent course as we weigh planetary security and analyze the dangers.