A Continental Shift and Its Implications

Although it seems a long way from interstellar space, the early Earth is a fascinating laboratory for life’s development that should yield clues about how life takes hold elsewhere. Thus new work on the movements of the early continents catches the eye. In this case, the Gondwana supercontinent is found to have undergone a 60-degree rotation across Earth’s surface during a highly interesting period, the Early Cambrian. This is the fecund era when the major groups of complex animals appeared in relatively rapid succession. 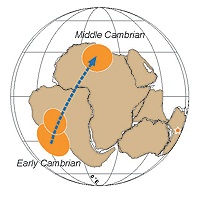 Gondwana is what we can call the southern precursor supercontinent, a vast region that would eventually separate from Laurasia roughly 200 million years ago when the Pangaea supercontinent broke into two large areas. This Wikipedia article gives you the basics on Gondwana, noting that it included most of the landmass in today’s southern hemisphere, including Antarctica, South America, Africa, Madagascar, Australia, New Guinea and New Zealand, along with the Indian subcontinent and Arabia (although the latter two have, obviously, moved into the northern hemisphere).

Image: The paleomagnetic record from the Amadeus Basin in Australia (marked by the star) indicates a large shift in some parts of the Gondwana supercontinent relative to the South Pole. Credit: Ross Mitchell/Yale University.

The movement of the entire Gondwana landmass was relatively rapid, with some regions attaining a speed of at least 16 (+12/-8) centimeters per year about 525 million years ago. Compare that with the pace of today’s shifts, which are no higher than 4 centimeters per year. The intriguing question is whether the shift results from plate tectonics — the continental plates in motion with respect to each other — or ‘true polar wander,’ which involves the solid land mass down to the liquid outer core rotating together with respect to the planet’s rotational axis, changing the location of the geographic poles. More in this Yale University news release.

But back to the main issue, which is the effect such migration would have had on the environment and living creatures. In this model, Brazil shifted from close to the south pole toward the tropics, the kind of movement that would have affected carbon concentrations and ocean levels. Here’s what Mitchell has to say about the results:

“There were dramatic environmental changes taking place during the Early Cambrian, right at the same time as Gondwana was undergoing this massive shift. Apart from our understanding of plate tectonics and true polar wander, this could have had huge implications for the Cambrian explosion of animal life at that time.”

It will be fascinating to see how this work is followed up in other locales as we work to explain the shift’s effects. Mitchell and team did their work studying the magnetization of ancient rock in the Amadeus Basin of central Australia. The paper is Mitchell et al., “Rapid Early Cambrian Rotation of Gondwana,” in Geology Vol. 38, No. 8 (August, 2010), pp. 755-758 (abstract).

Next post: Thoughts on Brown Dwarfs, Disks and Planets