IBEX: From System’s Edge to Nearby Space

When the Project Daedalus team went to work to design a starship back in the 1970s, they contemplated using the atmosphere of Jupiter as their source for helium-3, an isotope needed in vast quantity for Daedalus’ fusion engines. More recently, though, attention has turned to the lunar surface as a possible source. Now the IBEX spacecraft, normally charged with studying the interactions between the heliosphere and what lies beyond, has been used to examine a useful recycling process as particles hit the Moon, pushed there by the Sun’s 450 kilometer per second solar wind.

A Glow of Energetic Neutral Atoms

The process is straightforward — lacking a magnetosphere, the Moon takes the full force of the solar wind, absorbing most of its particles into lunar dust. But the IBEX team, led by David McComas (Southwest Research Institute), has been able to show that about ten percent of the solar wind particles escape back to space in the form of energetic neutral atoms, or ENA’s, detectable by the spacecraft. IBEX, traveling in an eight-day orbit around the Earth, sees this ‘glow’ in its ENA detectors.

What IBEX detects are enough solar wind particles bouncing off the lunar surface as ENA’s to account for about 150 tons of hydrogen atoms per year, the rest remaining behind, some doubtless in the form of surface helium-3, whose measurement will one day help us calculate how useful a source it may become. But IBEX (Interstellar Boundary Explorer) is primarily focused on a much more distant venue. Its real mission is to see what happens to those same solar wind protons when they encounter interstellar atoms at the edge of the heliosphere.

Energetic neutral atoms are created at system’s edge when solar wind protons draw electrons from interstellar atoms, making them electrically neutral and thus no longer controlled by magnetic fields. Those ENAs that bounce back in the direction of the Earth can be recorded by IBEX, which studies a section of the sky about seven degrees across, scanning overlapping strips that complete a 360-degree map of the sky every six months.

The IBEX surprise, announced last October, was the discovery that the expected variations in emissions from the interstellar boundary were not evident. Instead, IBEX found what McComas at the time called “a very narrow ribbon that is two to three times brighter than anything else in the sky.” It’s chastening to remember that the Voyager spacecraft totally missed this feature because, unlike their point source measurements, IBEX can use its detectors to build up a complete map.

The spacecraft has also been used to observe Earth’s magnetosphere from the outside, using the same ENA detection methods to see the interactions between the solar wind and the magnetic bubble surrounding our planet. Here the parallel between the heliosphere and the magnetosphere is interesting. The magnetosphere protects the Earth’s surface, causing the solar wind to pile up along its outer boundary (the magnetopause) before being diverted to the side. The heliosphere’s interstellar boundary, in a similar way, protects the Solar System from the worst effects of galactic cosmic ray radiation. 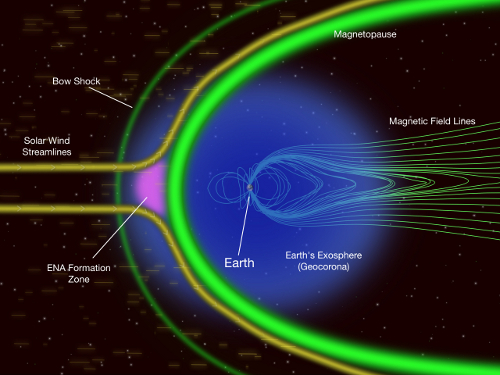 Image: IBEX found that Energetic Neutral Atoms, or ENAs, are coming from a region just outside Earth’s magnetopause where nearly stationary protons from the solar wind interact with the tenuous cloud of hydrogen atoms in Earth’s exosphere. Credit: NASA/Goddard Space Flight Center.

The IBEX team worked closely with the European Space Agency’s Cluster 3 spacecraft in observations made in March and April of last year. The new maps thus created show the teardrop shape of the magnetopause as solar wind protons pull electrons from hydrogen atoms in the Earth’s outer atmosphere. This region, the outer exosphere, is now shown to be tenuous indeed, with about eight hydrogen atoms per cubic centimeter. Thus ENAs helps us notch another needed measurement of a region that has been tricky to study.

The Wind and the Sail

You can see, too, that we’re gradually building up a picture of the solar wind that will help us analyze whether propulsion options like magsails have potential. Is the solar wind stable enough to allow accurate navigation by a magnetic sail-enabled spacecraft? Certainly the potential of hitching a 450-kilometer per second ride to the outer Solar System has appeal, and the deployment issues involved in large solar sails disappear with a magsail. But let’s see what IBEX and other missions can tell us about the solar wind as it reacts to the interstellar medium at system’s edge and plays against the magnetosphere closer to home.