What do you get if you combine the insights of nine expert panels, six study groups and a broad survey of the astronomy and astrophysics community? If you’re lucky and have the right committee, you wind up with useful analyses of the readiness and costs of science projects for the future, both major and minor. And as the National Research Council has done in its new report, you then create a decadal survey, in this case the sixth produced by the NRC, that identifies where the US should go next in answering ‘profound questions about the cosmos.’

A prepublication copy of New Worlds, New Horizons in Astronomy and Astrophysics is available online. To understand the needs of space science in the next ten years, though, be prepared for new acronyms. The most significant for Centauri Dreams readers will probably be WFIRST, the 1.5-meter Wide-Field Infrared Survey Telescope, which could launch as early as 2020 as part of our ongoing search for terrestrial exoplanets. In terms of the panel’s priorities, WFIRST comes in first in the category of space projects costing over $1 billion. 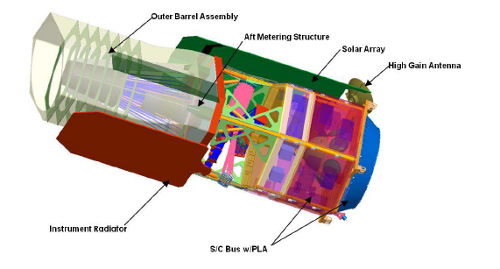 Image: WFIRST is an infrared telescope with a three‐mirror design. It will have HgCdTe detectors with 144 megapixels in total and angular resolution of 200 milliarcseconds. The sensitivity should be about 200 nJy or 26th magnitude, enabling shape measurements and photometric redshifts to a depth of 100,000 galaxies per square degree over half the sky. Spectroscopy will be achieved with a grism or prism and will rely mainly on measurement of H alpha out to a redshift of about 1.8 Credit: JDEM Project, NASA‐GSFC.

According to the survey, WFIRST will cost about $1.6 billion, and is conceived as “…an observatory designed to settle essential questions in both exoplanet and dark energy research… which will advance topics ranging from galaxy evolution to the study of objects within our own galaxy.” The telescope would be deployed at the L2 Lagrangian point, from which it could refine our estimates of the number of Earth-like planets in our galaxy and map the distribution of two billion other galaxies. These studies, complemented by weak lensing, would help us understand how dark energy has shaped the universe.

The latter component of the telescope’s mission highlights the difference between it and the James Webb Space Telescope, scheduled for a 2014 launch. From the report:

As a telescope capable of imaging a large area of the sky, WFIRST will complement the targeted infrared observations of the James Webb Space Telescope (JWST). The small field of view of JWST would render it incapable of carrying out the prime WFIRST program of dark energy and exoplanet studies, even if it were used exclusively for this task.

The five-year baseline mission could be stretched to a ten year extended mission, the report notes, and potential collaboration with the European Space Agency and a proposed mission called Euclid is urged in the report. It’s interesting to see that in its look at WFIRST’s role in exoplanet research, the panel focuses on gravitational microlensing, whereby we infer the presence of planets by their effect on light from background stars:

A survey for such events is one of the two main tasks of the proposed WFIRST satellite. As microlensing is sensitive to planets of all masses having orbits larger than about half of Earth’s, WFIRST would be able to complement and complete the statistical task underway with Kepler, resulting in an unbiased survey of the properties of distant planetary systems. The results from this survey will constrain theoretical models of the formation of planetary systems, enabling extrapolation of current understanding to systems that will still remain below the threshold of detectability.

The report sees our hunt for terrestrial worlds as having both space-based and terrestrial components. The panel pictures the process working like this:

• Carry out a focused program of computation and theory to understand the architectures of planets and disks.
• Use the Kepler transit survey to measure the probability that a solar‐type star has a massive terrestrial companion, and that a red star harbors an Earth‐like planet.
• Perform a microlensing survey from space using the recommended WFIRST to characterize in detail the statistical properties of habitable terrestrial planets.
• Improve radial velocity measurements on existing ground‐based telescopes to discover planets within a few times the mass of Earth as potential targets for future space‐based direct‐detection missions.
• Use ground‐based telescopes, including ALMA , AO‐equipped optical/infrared telescopes such as GSMT, and mid‐infrared interferometry, or space‐based Explorers, to characterize the dust environment around stars like the Sun, so as to gauge the ability of future missions to directly detect Earth‐size planets in orbits like that of our own Earth.
• Locate the prime targets for hosting habitable, terrestrial planets among our closest stellar neighbors.
• Use JWST to characterize the atmospheric or surface composition of planets within a few times the size of Earth, orbiting the coolest red stars. These are the planets that might be discovered by ground‐ and possibly space‐based surveys.
• Follow up nearby systems discovered by Kepler.
• Assess habitability by using IXO to characterize the frequency and intensity of flares on host stars.
• Use ALMA and CCAT to seek biogenic molecules thought to be precursors to life.
• Develop the technology for an ambitious space mission to study nearby Earth‐like planets.

WFIRST’s dark energy component comes in direct descent from the proposed Joint Dark Energy Mission — JDEM was used as the basis for the cost and technical evaluation assessment produced by the committee, and the report notes that JDEM’s capabilities are ‘essentially identical to those envisaged for WFIRST.’ Here the report zeroes in on the dark energy work:

To measure the properties of dark energy, WFIRST will employ three different techniques: it will image about 2 billion galaxies and carry out a detailed study of weak lensing that will provide distance and rate-of-growth information; it will measure spectra of about 200 million galaxies in order to monitor distances and expansion rate using baryon acoustic oscillations; and finally, it will detect about 2,000 distant supernova explosions, which can be used to measure distances. WFIRST provides the space-unique measurements that, combined with those from LSST (the committee’s highest-priority ground-based project), are essential to advance understanding of the cause of cosmic acceleration.

Pairing the ambitious WFIRST mission with ESA’s Euclid seems a rational thing to do, given the overlapping science objectives of the two missions and the opportunity to lower costs via collaboration, but we lack a firm decision on whether either of these missions will actually fly. This BBC story notes that ESA’s infrared detectors for Euclid would need to be sourced from the US, but Europe currently has the more advanced design, one that is within a year or so of completing its design assessment and being chosen (or not) to go operational.

The advantages of a collaborative mission seem clear at this stage. And BBC writer Jonathan Amos correctly notes the fiscal realities that will shape discussions between NASA and ESA. The James Webb Space Telescope has run far over budget, an experience ESA would not want to repeat as a partner on WFIRST. NASA and ESA will have to sort these and other issues out directly, because the Decadal Survey, while influential, is at heart only a set of recommendations, if exciting and well-informed ones at that.

Previous post: IBEX: From System’s Edge to Nearby Space