Star Wars? Not at NASA

I had started today’s entry — on dark energy — only to be sidetracked by a short piece in Space.com that almost had me spewing my morning coffee all over my keyboard. Here’s a quote from the story, which focuses on a Star Wars convention in Florida held last weekend:

“‘Star Wars’ filmmakers and fans asked NASA representatives to develop a hyperdrive that can transport astronauts through space at light speed. And to make it snappy.”

In response, the story quotes NASA’s Joseph Tellado, a logistics manager for the International Space Station, who says this:

“We need better propulsion systems. Right now I’d say that would be the one invention that would really help us out a lot. It’d be great if our astronauts could go at hyperspeed…. I believe ‘Star Wars’ and NASA have a lot in common. We’re looking to the future. NASA is like the first stepping stone to ultimately get to that ‘Star Wars’ level.”

And the story adds this:

The inspiration works both ways, with NASA and “Star Wars” inspiring each other to stretch out and envision the future and then fill in details of what that future might look like.

NASA in the Hunt for Breakthroughs?

Astounding. Here’s why I burned my tongue on a cup of Sumatra Mandheling this morning: Despite what convention-goers may now believe, NASA has no involvement whatsoever in the kind of technologies these people are talking about. True, the agency once funded the Breakthrough Propulsion Physics project, run out of Glenn Research Center by Marc Millis. BPP’s charter was to investigate the kind of technologies that might one day lead to deep space and interstellar flight, among them so-called ‘warp drive’ and other possibilities. But the agency stopped funding BPP in 2002.

NASA’s Institute for Advanced Concepts, not as ‘breakthrough’ oriented as BPP but a potent force for showcasing new ideas, was cut off from its funding in 2007. In short, the idea that NASA is conducting serious research on any aspect of advanced propulsion — I am talking here about the kind of concepts this convention glories in — is completely false. That work is now off the table. Marc Millis himself has left NASA and works on breakthrough concepts through the Tau Zero Foundation he founded, for which I toil on a daily basis in writing these posts. TZF has no NASA connection whatsoever and proceeds through private funding. The relevant links on the home page here give you the background on TZF.

So while I agree with NASA’s Joseph Tellado that hyperspeed is a desirable outcome, it should be added that it’s not one that NASA is engaged in studying. This is not to say that potential near-term technologies like solar sails may not be revived within the agency — the NASA solar sail is up to a Technological Readiness Level of 6 and a demonstrator sail like NanoSail-D should be launched within a year. But if you’re talking futuristic concepts like warp drive and the study of potential breakthroughs, NASA is no longer the place to be.

With that off my chest, let’s proceed to dark energy, which I want to discuss because utterly unexpected scientific results may offer us useful clues to future technologies. We’re only beginning to learn about dark energy, but the notion that the universe should be expanding at an accelerating rate has flowed out of supernova observations that have been supported by later studies like the Supernova Legacy Survey. Using the Hubble Space Telescope, the Higher-Z team concludes that dark energy has been a factor for at least nine billion years.

All of which is strange and wondrous, as it implies that a hugely important component of our universe only became known within the last twelve years, when the first supernova work was reported. If there is a factor that causes space to expand — one that seems to make up about 72 percent of the mass-energy of the universe — it must exert a strong negative pressure to account for its effects. The fact that it is so hard to detect and is not thought to interact with the fundamental forces other than gravity means that studying it in the laboratory is, to say the least, problematic.

And as far as harnessing its powers for future propulsion systems, the idea is far-fetched in the extreme — at our current technology level. We can’t, however, rule it out for the far future. And that’s the thing about the future. It plays out according to the inputs we give it, meaning that if in some future century our science progresses to the point that what we now know as dark energy becomes something we can engineer, it will be because a long line of scientists, starting now, have put in the groundwork to get us to that destination.

That’s why I keep an eye on dark energy studies in these pages, suggesting only that the more unexplained things we gradually master in the universe, the more likely we are to make genuine breakthroughs. The Breakthrough Propulsion Physics project used to make this sort of thing its bread and butter, but private organizations like the Tau Zero Foundation now have to continue that work without help from government agencies.

The Geometry of Spacetime

And there is some interesting news about dark energy as we continue to pursue this odd effect. One reason that dark energy work is so absorbing is that it tackles the very geometry of the universe. Findings from a team including Yale University physicist Priyamvada Natarajan, reported in the August 20 issue of Science, are based on gravitational lensing of 34 extremely distant galaxies situated behind the massive galactic cluster Abell 1689. Astronomers can study how the images are distorted by intervening mass. Says Natarajan:

“The content, geometry and fate of the universe are linked, so if you can constrain two of those things, you learn something about the third.” 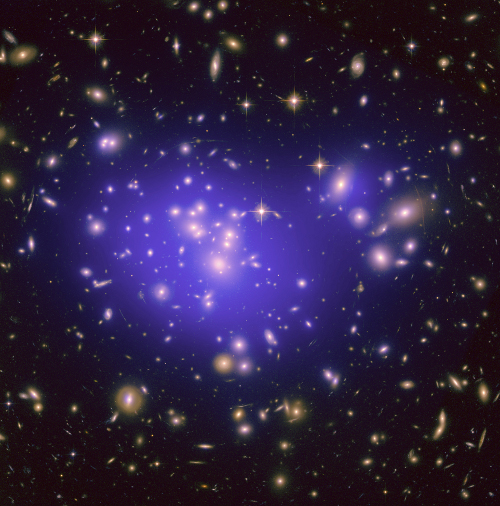 As I said, we’re in early days when it comes to the study of dark energy, and if there are actually ways to harness it, such developments may well be centuries away. But it’s useful to know that Natarajan and team have been able to narrow the range of current estimates about dark energy’s effect on the universe — denoted by the value w — by some thirty percent. They did this by combining the gravitational lensing studies with new data from supernovae, X-ray galaxy clusters and related data from the Wilkinson Microwave Anisotropy Probe (WMAP).

We learn from all this that the dark energy work thus far confirms previous findings that we do indeed live in a flat universe, one in which the expansion will continue to accelerate and the universe will expand forever. Assuming, that is, that dark energy’s effects remain constant over cosmological time scales. We have much to do to understand how dark energy works, but with NASA out of the hunt when it comes to examining it and other components of far future propulsion engineering, we shouldn’t expect that hyperdrive any time soon.

Next post: A Near-Term Read on Life in the Galaxy