Into the Interstellar Void

We often think about interstellar probes only in the context of what they find at the end of their journeys — astrobiologically interesting planets seem to be the whole story. But not so fast. As Ian Crawford (University of London) notes in a recent paper, there are quite a few fascinating — and indeed critical — things we need to learn about interstellar space itself, in this case what is known as the Local Interstellar Medium (LISM). Crawford, who has been analyzing these matters for the Project Icarus team, notes how much we’ve learned about the LISM since the Daedalus days. 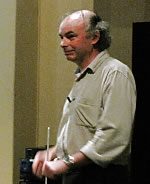 The new paper grows out of Crawford’s presentation at the British Interplanetary Society symposium ‘Project Daedalus – Three Decades On,’ which was held last September in London. It reflects his thinking on interstellar probes in relation to planetary and stellar studies and astrobiology as well as the nature of the medium through which the probe will fly. But today I want to focus on the LISM because what we might erroneously consider to be relatively empty space turns out to be challenging indeed.

Not So Empty Space

After all, at the kinds of speeds we’re discussing for an interstellar probe, somewhere in the range of 10 percent of lightspeed at minimum (Daedalus aimed at 12 percent), what seems empty void can be a minefield. Consider just a few of the issues Crawford raises here:

Direct measurements of the interstellar dust density, and the size distribution of dust particles, will be especially important because sub-micron sized dust particles will erode exposed surfaces (see the analysis performed for Daedalus by Martin [16]), and larger particles (i.e. larger than a few tens of microns) may, if present in the LISM, cause a catastrophic failure of the vehicle. Determining some of the other properties of the LISM will also be important for longer term planning of other interstellar propulsion concepts – for example, determining the LISM hydrogen density, and its ionisation state, will be important for assessing the future practicality of interstellar ramjets…

We’d better, in other words, get up to speed about the interstellar medium before we launch any true interstellar craft, and that means a series of early missions of a precursor nature that can tell us what to expect. Crawford notes that the Sun is currently located close to the boundary of a small low-density interstellar cloud known as the Local Interstellar Cloud (LIC), one of several such clouds within several parsecs of our Solar System — indeed, one study identifies seven such clouds within 5 parsecs of Sol. These are found within the Local Bubble, about which this:

We can learn a lot about these matters, including the properties of the Local Interstellar Cloud, by spectroscopic studies of interstellar absorption lines toward nearby stars. Investigations into our Solar System’s interactions with the heliosphere are also useful, but we’ll need to augment these with direct measurements of the interstellar materials just beyond the heliopause, and that means developing the capability to get space probes to distances up to 1000 AU or more.

A Rationale for Probing the Void

Beyond that, and having taken these findings in account in its design, a true interstellar probe would be a priceless tool for measuring everything from dust density and composition to the interstellar magnetic field strength enroute. Crawford points out that a spacecraft moving at 0.1c could do daily measurements 17 AU apart (roughly half the radius of the Solar System) which would offer unprecedented knowledge of the structure of the Local Interstellar Medium.

Centauri A and B evidently lie beyond the Local Interstellar Cloud, although the line of sight from Earth is dominated by another interstellar cloud known as the G cloud. An interstellar mission to this system would tell us whether the Sun is actually embedded in the Local Interstellar Cloud or just outside it in the region where the LIC is interacting with the G cloud. Conceivably a Centauri mission would thus get to sample two different interstellar clouds, along with the low density material between them. As Crawford writes, we would receive a windfall of data:

If the Sun does lie within the LIC, then a mission to α Cen would sample the outer layers of the LIC, an interval of low density LB material, the edge of the G cloud, and the deep interior of the G cloud. This would sample one of the most diverse ranges of interstellar conditions of any mission to another star located with 5 pc of the Sun, as most other potential targets lie within the LIC… Even if the Sun lies just outside the LIC (as argued by Redfield and Linsky [8]), the trajectory to α Cen would still permit detailed observations of the boundary of the G cloud (and its possible interaction with the LIC), and determine how its properties change with increasing depth into the cloud from the boundary.

Shielding Against the Medium

Needless to say, such a pathfinder mission would help in the planning of all follow-up interstellar missions. At 10 percent of lightspeed, a probe would have to be shielded against damage from high speed collisions with dust in the interstellar medium, a topic both the Daedalus and Icarus designers have had to take into consideration. It will be fascinating to see how the shielding options will be modified between Daedalus (1970s) and today’s Icarus design.

As I mentioned above, Crawford’s paper delves deeply into the rationale for an interstellar mission, going beyond the interstellar medium question to address planetary and stellar studies and astrobiology. It’s a fascinating rationale for undertaking these studies and continuing to advocate precursor missions. And note this final caveat re Alpha Centauri as a destination:

The relative proximity of α Cen, together with its interesting interstellar sightline and the presence of stars of three different spectral types, makes it an attractive target for humanity’s first interstellar mission. However, as the bulk of the scientific benefits of interstellar spaceflight pertain to planetary science and astrobiology, a final prioritization must await future developments in the detection of planetary systems around the nearest stars. Fortunately, expected advances in astronomical instrumentation over the next century should ensure that a comprehensive list of prioritized targets is available well before rapid interstellar travel is technically feasible.

The paper is Crawford, “The Astronomical, Astrobiological and Planetary Science Case for Interstellar Spaceflight,” published in the Journal of the British Interplanetary Society Vol. 62 (2009), pp. 415-421 (preprint).