SETI on the Ecliptic

Is anyone out there in the galaxy aware of our presence? If so, it’s most likely through detection of our planetary radars, like those at Arecibo and Evpatoria that are used to detect and study nearby objects like asteroids, and provide a valuable part of our planetary defense. Sure, we’ve been pumping television and radio signals into the deep for a long time now, but Arecibo is the most powerful radar in the world, its 430 MHz transmitter offering a maximum total peak pulse output power of 2.5 MW. The planetary radars at Arecibo, Goldstone and Evpatoria are sending far more powerful signals than the faint traces of our early TV broadcasts.

It’s one of the hopes of SETI that we might detect a similar transmission from another civilization, but in saying that we run into all kinds of assumptions. How long a time-frame does a civilization have before it develops technologies far superior to planetary radars for studying nearby objects? For that matter, how long would any sort of electromagnetic leakage be detectable before the culture behind it moves on to the next stage of development? The SETI Institute’s Jill Tarter nails the problem in this recent article on Silicon.com:

“I can tell you how long it will take us to cover one million, ten million or 100 million stars,” Tarter said. “But I can’t guarantee that what we are looking for is the right thing.

“We may be doing a marvellous search for the wrong thing – we may not even have the technology today to look for the right thing because we haven’t invented it yet.”

SETI pushes on despite the questions, and despite Tarter’s analogy that all of the searching to date is no more than taking an eight-ounce glass of water out of all the Earth’s oceans. Our most intensive studies thus far have included about 2000 stars, and even though the Allen Telescope Array will help the SETI Institute extend the search to perhaps as many as ten million stars over the coming decade, we’re still talking about a fraction of the galaxy’s population, variously estimated at anywhere between 100 billion to 400 billion depending on where you look.

How to enhance our chances? The ATA, which will eventually expand to an array of 350 antennae from its current 42, will allow the SETI Institute’s search to proceed year-round, one wrinkle being that the search will now take in stars whose position means that any civilizations there would be able to spot a transit of Earth across our Sun with their telescopes. It’s good to see this idea get more public exposure. It was back in 2008 that Richard Conn Henry (Johns Hopkins) told an American Astronomical Society meeting that we’re more likely to receive a signal from a civilization that can spot us first, assuming that alien cultures share our interest in sending messages into space.

Henry is interested in the ecliptic, the plane of the Earth’s orbit around the Sun. The ecliptic is tilted about sixty degrees with relation to the galactic disk, and it takes up no more than three percent of the sky, offering a useful constraint on the area that a search using these methods would have to examine. A star system close to the ecliptic would be one that could have detected our transits across the Sun, and perhaps have learned that our planet is in the habitable zone. Spectroscopic analysis of our atmosphere would make it clear that life exists here. 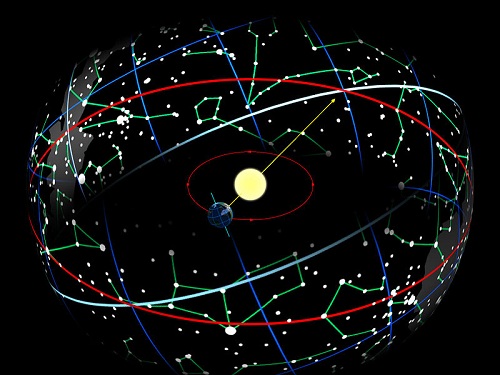 Image: As the Earth orbits the Sun, it seems from the Earth that the Sun moves over the ecliptic (red) on the celestial dome. Astronomers on distant worlds that line up with the ecliptic would be able to see the Earth transit across the face of the Sun. Credit: Wikimedia Commons.

We fall back on Tarter’s comment that we don’t necessarily know what technologies an alien culture would use for such detections, but it’s certainly true that in our early efforts to find habitable planets around other stars, we’re using the transit method in missions like CoRoT and Kepler. Shmuel Nussinov (Tel Aviv University) has examined how we might use this approach to study where the ecliptic stands in relation to the galactic plane, the two areas of intersection being in Sagittarius and in Taurus. We’ll see how the idea plays out in the ATA investigations, which will target the entire ecliptic but probably pay special attention to Taurus and Sagittarius.

All of this reminds me that if you haven’t yet looked at the SETIQuest site, you should familiarize yourself with it. SETIQuest is an attempt to harness the power of the Net community to do solid science on behalf of the SETI effort, and that includes releasing not just data collected by the ATA but also the computer code that is used to analyze that data. You can look at an early release of SonATA (standing for ‘SETI on the ATA’) here, although I notice that this early version is only compatible with SuSE Linux (should run on other flavors, I suspect) or the Mac, with the powers that be looking for the necessary help to build a Windows version as well.

What can the open source community do with SETI code? The idea is that someone out there might have a great idea for a new approach, a set of algorithms that may make it possible to ferret a useful signal out of the noise, assuming one is actually found. We don’t have all the answers on digging signals out of interference and we can use work that questions older assumptions by getting down and dirty with the code to see what comes up. SETIQuest is going to be a fascinating project to watch as dish by dish, the ATA becomes fully operational.