The ‘slow boat’ to Centauri concept we’ve discussed before in these pages envisions generation ships, vessels that take thousands of years to cross to their destination. And based on current thinking, that’s about the best we could manage with the propulsion systems currently in our inventory. Specifically, a solar sail making a close solar pass (a ‘sundiver’ maneuver) could get us up to 500 or 600 kilometers per second (0.002c), making a 2000-year journey to the nearest star possible. It’s hard to imagine under what circumstances such a mission might be launched.

But let’s think long-term, as Greg Matloff (New York City College of Technology) did in a session that just concluded at the International Astronautical Congress in Prague. Matloff, a solar sail expert and well known figure in the interstellar community, notes that when the Sun leaves the main sequence and becomes a red giant, its luminosity may have increased by a factor of a thousand. Imagine using that kind of star as the source of the photons for your solar sail and you’ve dropped the time for an interstellar transit down to centuries or even decades. 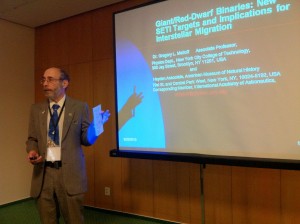 So let’s think about a civilization leaving the vicinity of a giant star, looking for a new home as their system is destroyed. They’ve got fast propulsion options by virtue of their star. The catch is, how do they slow down when they arrive? Traveling at the kind of velocities that would allow an interstellar crossing in decades, their photon sail would be all but useless for deceleration upon arrival at a main sequence star, meaning they’d have to supplement it with something like a magnetic sail. Or perhaps there’s another way, and one that has SETI implications.

After all, most stars are members of binary or multiple systems. Now we have an improved scenario: An advanced civilization targets a binary system composed of a giant and a widely separated red dwarf star. It uses the red giant’s intense luminosity for deceleration, then crosses to the planetary system of the red dwarf. We know that red dwarfs remain stable on the main sequence for as long as a trillion years, making building a new home there an attractive and long-term proposition.

We may find such thinking remote because we’re not all that concerned about our own Sun’s far future, with five billion years to go before it enters its giant phase. But if intelligent life is widespread in the universe, then a species evolving on planets circling stars older than our own or far more massive than our Sun may have already taken such a path. Matloff thus suggests that SETI take a look at red giant/red dwarf binaries within 100 light years from the Sun.

He then proceeds to go through a list of candidates, finding four possibilities: Alschain (Beta Aquilae), Gienah (Epsilon Cygni), Aldebaran (Alpha Tauri) and Theta Ursae Majoris [see note in the comments section]. Alschain’s red dwarf companion is roughly 150 AU from the star, while Gienah’s is at some 1700 AU. Aldebaran is just over 600 AU from its red dwarf companion, and Theta Ursae Majoris has an M6 red dwarf within 94 AU. All of these stars are northern hemisphere objects, so that for SETI purposes, the Allen Telescope Array should be able to conduct observations on them.

And our own future? Matloff’s figures show that at intervals of about 100,000 years, random motions cause a star to approach the Sun within two light years. In the paper his presentation is based on, he writes:

If the Sunʼs luminosity will be at least twice its current level for 2 billion years between its late-main-sequence and planetary-nebulae phases, at least two stellar systems of the type considered here should closely approach the Sun. If we consider trips to destinations as far as 4 light years, we expect close approaches by 16 of these systems.

And actually, the number is higher, for Matloff goes on to show that most stars in the Sun’s vicinity are of roughly the same age. Five billion years from now, when and if a civilization remains in our system, many nearby stars will also have entered their red giant phase. Our remote posterity will, then, have plenty of red giant/red dwarf pairs to choose from, and thus planets to terraform and colonize in their habitable zones. “Terrestrial-derived life,” Matloff adds, “could have one or more planetary homes that will remain habitable for perhaps a trillion years.” 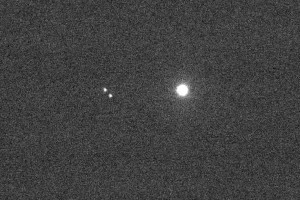 But back to SETI. Just as we have four red giant/red dwarf binaries to look at for SETI purposes, we might also consider widely separated white dwarf/red dwarf binaries. After all, a star’s red giant phase is finite, after which it becomes a white dwarf. Any civilization that used these methods to enter a planetary system around a red dwarf would survive to find itself in close proximity to the white dwarf remnant. And in fact, we do have one system like this close to the Sun. It’s Omicron-2 Eridani, 16.4 light years away, a K1 orange dwarf with a white dwarf that has an M4 dwarf companion of its own at 35 AU. The system is also called 40 Eridani.

Image: The triple star system 40 Eridani. The fainter stars are B and C. 40 Eri B is a white dwarf star, 40 Eri C is a red dwarf. Credit: RDP, Tulane University.

Ring any bells? 40 Eridani is considered by many fans to be the location of the planet Vulcan in Star Trek. Now wouldn’t it be a kick if a place like that yielded our first confirmed signal from an extraterrestrial civilization?