Exploring Alcubierre’s Ideas in the Lab

Physicist Richard Obousy has long been fascinated with the Casimir force, dark energy, and the stability of higher dimensions. His dissertation at Baylor University, in fact, focused on the possibility that dark energy could be an artifact of Casimir energy in extra dimensions. Now project leader of Project Icarus, Obousy here takes a look at a recent paper by Igor Smolyaninov (University of Maryland) that explores the Alcubierre ‘warp drive’ concept from the standpoint of material parameters. Can warp drive be modeled in the laboratory, and under what constraints? Finding the answer may yield new information about this exotic concept. As Smolyaninov says in his paper, “We will find out what kind of metamaterial geometry is needed to emulate a laboratory model of the warp drive, so that we can build more understanding of the physics involved.” 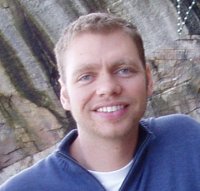 Fermat’s principle dictates that light rays follow the shortest optical paths in media. Effectively they are geodesics, and Einstein’s General Theory of Relativity (GR) has developed the theoretical tools for studying fields in curved geometries.

General Relativity also has the capability to predict the path a light ray would travel under unusual gravitational conditions, for example, black-holes, big bangs, wormholes and warp drives. One of the underlying principles behind GR is that matter affects space in such a way that space becomes curved. GR contains all the necessary mathematical machinery to model this.

Until recently, there has been no way to recreate such exotic gravitational conditions in a lab. The best we can do is simulate them on a computer. However, with the advent of metamaterials, we now have much improved capability to manipulate electromagnetic (EM) radiation and to physically simulate the remarkable phenomena predicted in GR.

This has been done recently in the context of the Alcubierre Warp Drive.

One aspect of Igor Smolyaninov’s recent work that I would like to emphasize is that it is a simulation of the path a light ray would travel – not a duplication of the phenomenon. See, for example, the figure below. GR predicts that an object as massive as the sun has the capacity to bend space in such a way that the path that a light ray takes becomes curved when it enters the influence of the stars gravity. A star, therefore, can appear to be somewhere different from a star-chart’s prediction due to the bending of its path by the sun.

Now, in the absence of the sun, the light ray could be coerced to follow a similar path with the simple inclusion of a device such as a prism, or a mirror, which refracts/reflects the light, forcing it to take an identical path to the one it would have taken in the presence of the sun. 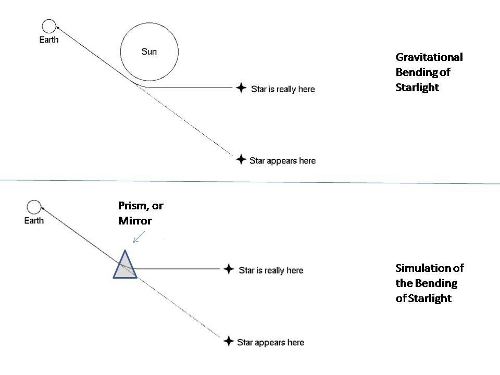 Image: The bending of starlight due to a powerful gravitational field, compared with the ‘simulated’ bending by inserting a prism, or mirror in the appropriate position. Above illustrates a prism, but a mirror, angled correctly, could achieve the same effect. Credit: Richard Obousy.

Of course, the prism, or mirror, is not actually bending spacetime, it is merely mimicking the effect. Analogously, metamaterials provide experimentalists the ability to mimic, or simulate exotic light ray trajectories thanks to the remarkable property of metamaterials having a negative refraction (when examined macroscopically).

So, a black hole, warp drive or big bang is not actually being created –its effects, on light, are simply being simulated.

With regard to the paper ‘Metamaterial-based model of the Alcubierre warp drive’, Smolyaninov derives some of the features that a metamaterial would need in order to simulate the Alcubierre warp drive in the lab. Due to certain physical restrictions, only a simulation of sub-light velocities is possible, up to about 25% the speed of light. Of course, no propulsion actually occurs – just a simulation of the space in the immediate vicinity of a sublight warp drive.

Although Smolyaninov’s paper won’t directly assist us in getting to Alpha Centauri, it is certainly a welcome tool for physicists interested in exploring some of the properties of warp drives in the lab!

The paper is Smolyaninov, “Metamaterial-based model of the Alcubierre warp drive,” available as a preprint.