The Poetry of SETI

Stephen Baxter’s “Turing’s Apples,” which originally ran in a collection called Eclipse Two (2008), is an intriguing take on SETI and the problem of extracting meaningful information from a signal. It’s a bit reminiscent of Fred Hoyle’s A for Andromeda (1962) in that the SETI signal received on Earth contains instructions for building something that may or may not pose a threat to our species. Sorting out the issue involves discussion of information theory and Shannon entropy analysis. 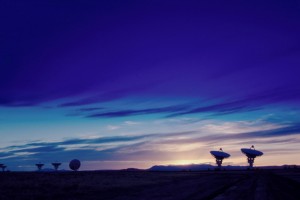 Say again? Best to handle this by quoting from the story. In this scene, the protagonist’s brother, who is obsessed with the signal his team has received from the direction of the Eagle Nebula and, ultimately, the galactic center, is explaining how information is being extracted from it. Shannon entropy analysis looks for relationships between signal elements. The brother goes on:

“You work out conditional probabilities: Given pairs of elements, how likely is it that you’ll see U following Q? Then you go on to higher-order ‘entropy levels,’ in the jargon, starting with triples: How likely is it to find G following I and N?

“As a comparison, dolphin languages get to third- or fourth-order entropy. We humans get to eighth or ninth.”

“The entropy level breaks our assessment routines. We think it’s around thirty…It is information, but much more complex than any human language. It might be like English sentences with a fantastically convoluted structure – triple or quadruple negatives, overlapping clauses, tense changes.” He grinned. “Or triple entendres. Or quadruples.”

“They’re smarter than us.”

And that reminds me of an old friend, an amateur linguist but an extraordinary one, who once at a memorable lunch pulled off a triple pun involving three different languages, one of which was proto-Hebraic! I had to be led through its complexities before I could begin to appreciate it (and that only after I thought about it for the rest of the day). Now that’s high-level entropy…

I had the pleasure of talking about the Baxter story with Claudio Maccone over dinner last weekend in Austin. Claudio was on his way to the SETI Institute to give a lecture on the latest work on his statistical approach to the Drake Equation. The potential encounter with intelligence far greater than our own is what accounts for the fascination of SETI. No one knows whether we are alone in the galaxy or simply outliers amidst a sea of extraterrestrial civilizations, but the engagement with the latter possibility energizes a search that is now fifty years old.

Last week saw global coordination among SETI researchers as a way of marking that 50th anniversary, with astronomers from thirteen countries on six continents observing several nearby stars including the two that started it all, Epsilon Eridani and Tau Ceti. It was in April of 1960 that Frank Drake used the Green Bank instrument in West Virginia to listen in on the latter two stars. Project Ozma drew its name from The Wonderful Wizard of Oz, so the ongoing Project Dorothy picks up the theme by associating itself with that story’s heroine. The Project Dorothy observations involve both radio and laser signals, unlike the radio-only Project Ozma.

But the project is something more than merely commemorative. If one day we do receive a signal that appears to be the real thing, we’ll need to coordinate observations on a global scale. The SETI Institute’s Douglas Vakoch makes the point:

“Astronomers can now do SETI research at observatories from South Africa to the Netherlands, from Argentina to India, from Japan to Italy, as well as from the longstanding American projects at the SETI Institute, the University of California at Berkeley, and Harvard University. The lessons learned through Project Dorothy provide critical preparation for the day we finally detect a signal from another civilization. By learning how to coordinate international SETI observations now, we’ll be better prepared to track a signal continuously, around the world, after first contact.”

This Washington Post story discusses SETI basics and the new international exercise, which includes observatories in Italy, India, Argentina, Australia, France, Germany, the United Kingdom, South Korea, Sweden, the Netherlands, and several in the United States and Japan. Behind the observations is Shin-ya Narusawa (Nishi-Harima Astronomical Observatory, Japan), who notes the value of studying Tau Ceti and Epsilon Eridani in the venture. “They remain the symbol of the project Ozma,” Narusawa said, “and so are two of the target stars for Project Dorothy.”

We have reasons for doubting either of these stars might support an extraterrestrial civilization, but for that matter we have no confirmed rocky planet in the habitable zone of any star (and yes, that includes the hypothetical Gliese 581g, whose existence seems more and more unlikely). If SETI ever does get its breakthrough, it will be because we didn’t narrow the search too drastically based on our own assumptions, but remained open to the possibility of surprise.

Read the Baxter story for one take on SETI and surprise (it’s in the 26th annual Year’s Best Science Fiction volume edited by Gardner Dozois). But if you read no other science fiction on the subject, read James Gunn’s superb The Listeners (1972), as fine a take on the wonder-injecting business of listening to deep space as has ever been penned. It was, among other things, an inspiration for Sagan’s Contact. Gunn on SETI and the human spirit:

“…perhaps it was not just the reality but the imagery, like poetry, that soothed their doubting souls, the bowl held up to catch Donne’s falling star, the ear cocked to hear the shout from the other side of the universe that faded to an indistinguishable murmur by the time it reached them. And one thousand miles above them was the giant, five-mile-in-diameter network, the largest radio telescope ever built, that men had cast into the heavens to catch the stars.”