A gravitational wave is a ripple in spacetime, one that follows naturally from the theory of general relativity — Einstein did, in fact, predict the existence of such waves back in 1916. Yet so far we have had nothing but an indirect detection in the form of the Hulse-Taylor binary (PSR B1913+16), a pulsar in a binary system that includes a second neutron star, the two orbiting around a common center of mass. The 1993 Nobel Prize in physics went to Richard Hulse and Joseph Hooton Taylor (Princeton University), who showed that the system’s orbital decay corresponds with the loss of energy due to the kind of gravitational waves Einstein predicted.

What we now need is a direct detection, but these waves have proven to be a tricky catch. Consider this: The distance between two spacecraft flying five million kilometers apart would be changed by about a picometer by the effects of gravitational waves. That’s a distance 100 million times smaller than the width of a human hair, some .000000000005 meters. Yet it’s the distance scientists hope to measure with the LISA mission (Laser Interferometer Space Antenna), in which three spacecraft will fly in a triangle connected by laser beams, a formation flight orbiting the Sun roughly 20 degrees behind the Earth.

The plan: Aboard each of the spacecraft will be a cube of platinum and gold that floats freely in space. Passing gravitational waves should cause the distance between the cubes to vary, and the good news out of the Jet Propulsion Laboratory this week is that after six years of working on the LISA technology, scientists have tuned its phase meters (laser beam detectors) to the point where such a detection should be possible, the laser ‘noise’ dropping sufficiently to allow the evanescent wave signature through. Thus JPL physicist Bill Klipstein:

“In order to detect gravitational waves, we have to make extremely precise measurements. Our lasers are much noisier than what we want to measure, so we have to remove that noise carefully to get a clear signal; it’s a little like listening for a feather to drop in the middle of a heavy rainstorm.”

A feather in a rainstorm indeed, and even that seems to understate the case. JPL is now demonstrating that its instruments are sensitive enough to make detecting gravitational waves a possibility. The principle should sound familiar, as it’s basically interferometry (though with a time delay), often discussed here in terms of pooling the resources of multiple telescopes so as to produce an effective aperture equal to the separation of the telescopes. In LISA’s case, the three spacecraft are affected by passing gravitational waves so that the distances between the test masses changes, a fact revealed by the distances traveled by the laser beams of light.

Ground-based data processing will then tell us whether the light detected by the onboard phase meters shows any variation in distance between the spacecraft. By introducing artificial noise into their detectors, the JPL team has been able to show that its data processing techniques can filter it out, highlighting those one-picometer distance changes scientists hope to see. The LISA mission is a joint project between the European Space Agency and NASA that would launch around 2020 if selected. The National Research Council’s decadal report, which more or less put an end to the Space Interferometry Mission, has given LISA a high recommendation. 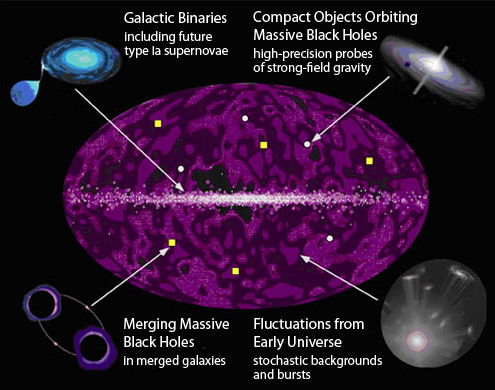 Image: The gravitational-wave sky, as observed by LISA. The plane of the Galaxy is visible as the white horizontal band of emission from millions of Galactic binaries. The dots and squares mark the locations of a small fraction of the black-hole mergers and capture events that LISA will observe, while the purple background represents the relic gravitational radiation that LISA may detect from the very early Universe. Credit: NASA/ESA.

If it succeeds, the LISA mission will open up a new way of observing the universe, looking for low frequency gravitational waves (0.03 milliHertz to 0.1 Hertz), a band thought to contain the emission from massive black hole binaries of the kind that form after the merger of entire galaxies. Gravitational waves are all about huge astronomical events like this, generated by compact objects like stellar remnants falling into galactic black holes and neutron stars in tight binaries. The behavior of spacetime when pushed to extremes may teach us not only about dense matter and stellar remnants, but about the expansion history of the universe itself.

What would a Cosmic Gravitational Wave Background look like, and what could it tell us about the earliest moments of the universe? Remember that the Cosmic Microwave Background emerged about 400,000 years after the Big Bang, and represents the oldest light we can see via electromagnetic astronomy. Gravitational waves should be able to propagate to us from before that era, making them a probe of the early universe that could identify the existence of new fundamental objects like cosmic superstrings, if they exist, thus offering a window into the various models of string theory and sketching the history of the phase transitions that shaped the cosmos.